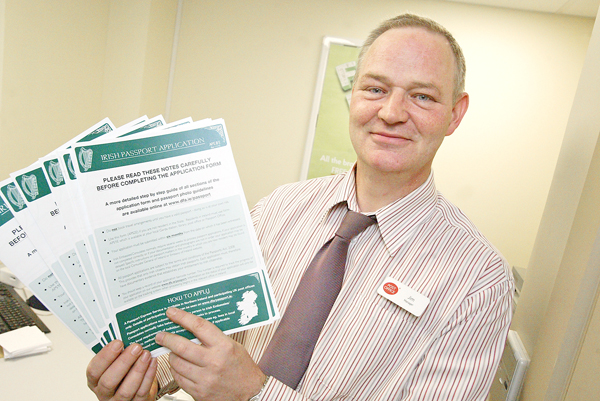 3,000 Irish passport application forms have been snapped up from post offices across West Belfast as the controversial fall-out and uncertainty from the EU referendum shows no sign of abating.
Several post offices in the area have been inundated with an unprecedented demand for Irish passport application booklets since the Brexit vote outcome on Friday morning when Britain voted to leave the EU. Staff at Stewartstown Road’s Suffolk Post Office branch told us that around 1,000 Irish passport application forms had been given out to the public while the Andersonstown News office on Hannahstown Hill, our Kennedy Centre kiosk, as well as our North Belfast News office at Cityside/Yorkgate were also swamped with people wanting passport photos taken for their Irish passport application process.
Kennedy Centre Subpostmaster Jim McCafferty told the Andersonstown News that 850 Irish passport application forms had been given out by staff since Friday.
“First of all people thought that the rush started on Friday – it hadn’t, it started these past few months since the EU referendum was called,” explained Jim. “Our passports submissions have been up 25 to 30 per cent year on year because of the referendum coming up.
“On Friday the whole place went crazy, we gave out close to 500 applications on Friday whereas we usually give out around 25 to 30 on any given day.
“Yes people are in a bit of a panic, I’ve heard about other post offices running out of the forms and we are probably going to run out of them ourselves in the next couple of days and have ordered another 1,200 forms to keep us going. We only have a few hundred left at the minute and usually we would have enough to see us through until the end of the summer.
“The Euro rate dropped seven cents on the £1 on Friday morning, €1.27 down to €1.20 and it’s been falling steadily ever since. It will continue to drop for a few more weeks until it settles down,” he said.
“The Kennedy Centre post office successfully piloted the Irish passport scheme around 12 years ago. We did 3,500 Irish passports last year and are looking at 4,500 plus this year due to the amount of applications being submitted.
“We have people coming from everywhere and from all over the city to get their form. Our staff are onhand to help in whatever way they can.”
Gavin Adair, manager of the Park Centre Post Office told us that there had been an 80 per cent increase in customers asking for an Irish passport application form since Friday morning.
“It’s been crazy, Friday and Saturday morning was hectic. The demand for forms doesn’t necessarily transfer to an increase in applications but, basically, every second person on Friday was asking for a form.”
Gavin said that the amount of forms given out “would be in the hundreds.
“I couldn’t literally put a number on it but at one stage we were almost out of application forms.
“Every other customer that was coming in, be it to withdraw money, post a package was asking ‘while I’m here I’ll get an Irish passport form’.
“Definitely a good few hundred have been given out since Friday but it has been calmer since Tuesday and today (Wednesday). It certainly has taken us by surprise.”
Eileen Adams from the Shaws Road Post Office said there had been a “small influx” in Irish passport application demand since Friday.
“What we have noticed though is that people are panic buying their Euros before going off on their holidays.
“We actually ran out of Euros on Monday and I had to place a special order for more and I’ve heard people are travelling to Newry to get a better rate. We would usually buy back Euros and that hasn’t happened either over the past couple of days,” she said.
Meanwhile, Sinn Féin member of Seanad Éireann, Niall Ó Donnghaile, has called on the Irish government to open a passport office in Belfast.
“It is very clear that, in the wake of England voting to take the North of Ireland out of Europe, there has never been a larger demand for Irish passport applications in the north of Ireland,” he said.