McAleer delighted to team up with Maloney 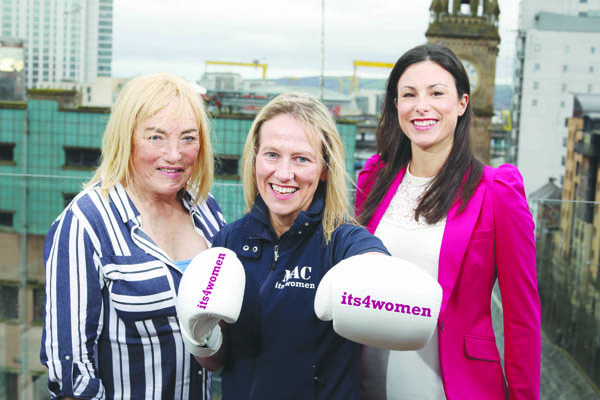 THE OPPORTUNITY to become a four-time world champion in a third code and to headline the first ever all-female boxing show in the North is on offer for Cathy McAleer who has penned a management deal with Kellie Maloney.

Belfast’s McAleer has already won world titles in karate and kickboxing, while drawing in a K1 title fight, but has since moved fully into boxing where she had won her first three bouts.

A fourth for the Commonwealth bantamweight title was due to take place last September, but the show fell through, as did another in autumn as the 41 year-old was left down, but far from out.

Instead, the John Breen-trained fighter made contact with Maloney and after brief consideration, she agreed to take on the vastly talented McAleer who will return to the ring at Aston Villa FC on February 22.

“To have an actual plan is brilliant because the last couple of fights has been me waiting to see if one would come up,” said McAleer who will also work with physiologist Joe Dunbar.

“I haven’t had a promoter and John was my manager, so John just said he would be my coach and let Kellie manage.

“That’s the right decision for all of us because Kellie has made a plan and I know exactly what’s happening.

“I know I could fight for a title very soon, but I’m in no rush as I love the sport and I’m here for the long haul.”

The chance to top an all-female bill in her home city also appeals to the South Belfast woman who enjoys a huge support and hopes other aspiring female boxers can benefit from her own popularity.

“To headline the first ever all-female bill would be unbelievable if it came around,” she confirmed.

“It would hopefully inspire other young females to come on board because there is unbelievable amateur talent like Michaela Walsh there, so if I could help inspire other women it would be great.”

Maloney – formerly Frank – guided Lennox Lewis to the undisputed heavyweight title before stepping away from the sport in 2013 with her well-publicised changes in her personal life taking place.

There was a brief return to boxing in 2015, but it took a private message from McAleer to prompt the Londoner to fully return to the sport in order to create what could be a little piece of history.

“I’ve always had to do it against the odds and as Frank, I took Lennox Lewis to the undisputed heavyweight champion of the world,” said Maloney who had linked-up with promoter Tommy Owens for McAleer’s next three fights.

“Now, to come back as Kellie, my goal is to manage a world champion in a male gender and a female gender. I feel like Alex Ferguson being talked out of retirement because I was enjoying the sun in Portugal.

“I will bring Cathy back here for a title fight and I would also like her to headline in Belfast for the first-ever all-female boxing show in the UK.”

Maloney believes his new charge can become a world champion within 18 months with Breen – who says McAleer will be his last world champion - predicting it will happen in a shorter timeframe.

McAleer is simply happy to have a plan in place now given what transpired in the second half of last year and believes her career is now on the right track with Maloney’s expertise to call upon.

“It was very frustrating as I had been training hard and did the sparring rounds – covered 100 rounds – and was ready to go for an eight round Commonwealth title,” said McAleer at Tuesday’s press conference in the plush surroundings of the Merchant Hotel.

“My dream was coming true and all of a sudden it was taken away. Two weeks out and the fight was pulled for no reason I could have impacted, so I just kept training with the hope a bit of luck would come.

“John was saying that anyone else would have thrown the head up by this stage but I said that something was bound to come up.

“I then saw Kellie on the TV so I read up on her and saw her passion was boxing so I made the contact and got her to come back. This couldn’t be a better fit for me or for both of us as a team.”