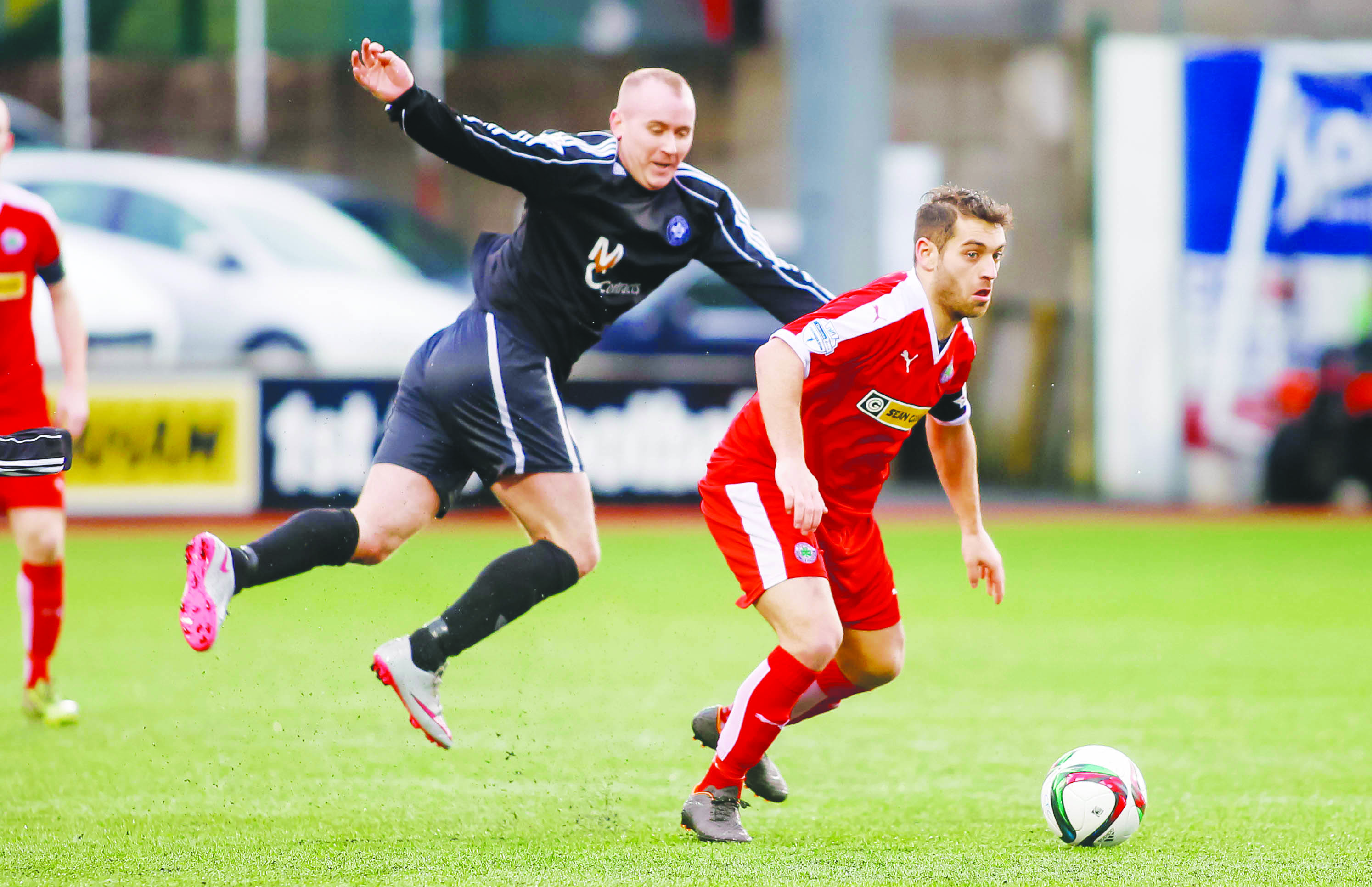 Gary Largey, pictured in action during the Irish Cup clash with Cliftonville, will be available for Sport and Leisure’s clash with Newington after serving a suspension Picture - Kevin Scott / Presseye

SPORT and Leisure Swifts manager Pat McAllister says the club have received no official confirmation from the IFA regarding the promotion situation in Championship 2.
Earlier this week, the licence applications for the various clubs were released and it was confirmed that Limavady can not gain promotion after their licence application for Championship 1 was refused.
In the event that PSNI win the league, Limavady wouldn’t be able take the play-off spot.
However, it is unclear whether that place would then go to the team in third – currently Sport and Leisure.
In Championship 1, the play-off place goes to the highest placed team who have obtained a licence to play in the Premiership, yet this is not the same case in Championship 2.
“The club is still awaiting official confirmation,” said McAllister.
“We haven’t been informed what the situation is and who is definitely coming down.
“We might have the chance of a play-off. All we told the players was to keep doing what they are doing on the pitch and trying to win games.
“There is still a small chance that third place could get a play-off.
“In Championship 1, if Ards win the league, the next team with a licence get a play-off place. We can’t understand why the same doesn’t apply in Championship 2.
“The same people run the two leagues so why is there a difference?”
Even if the Swifts miss out on the chance of a play-off, McAllister insists he is incredibly proud of his players – especially given their hectic schedule of late.
“It has been a phenomenal effort from the players to finish this high up,” added McAllister.
“Personally, I would like a crack at a Championship 1 team over two legs to see how we get on. If it is not to be, it is not to be.
“I can’t ask for any more from the players. The last month, what the people behind the scenes have asked our players to do wouldn’t be asked of anybody else but they have just got on with it.
“Players have dropped in and dropped out of the team and there have been no complaints.
“All credit must go to the players. Sometimes, it hasn’t been pretty, but it is all about getting the result.
“Last night (Tuesday) was a perfect example (1-0 home win v Portstewart) – it was a bad night for football but we dug in and scored in the last minute.
“The character of our boys has never been in question all season.”
Sport and Leisure’s gruelling run of 11 games in four weeks comes to an end with two games in three days.
First up is tomorrow (Thursday) night’s clash with relegation-threatened Newington before their Championship 2 campaign ends with Saturday’s clash with Wakehurst, who are already relegated.
McAllister says he is only concerned with securing maximum points and is not worried about how the relegation mire affects their rivals.
“Newington won’t be getting any favours from us and I don’t think they would want any,” stated the Swifts boss.
“You can’t play football in Championship 2 and do people favours – it doesn’t work like that. There is a rivalry between the clubs. You are made aware of that as soon as you come on board.
“We will be going to gain as many points from our last two games as possible. It is up to Newington to save themselves.”
McAllister will be boosted by the availability of both Padraig Lynch and Gary Largey after the pair missed the midweek win over Portstewart through suspension.