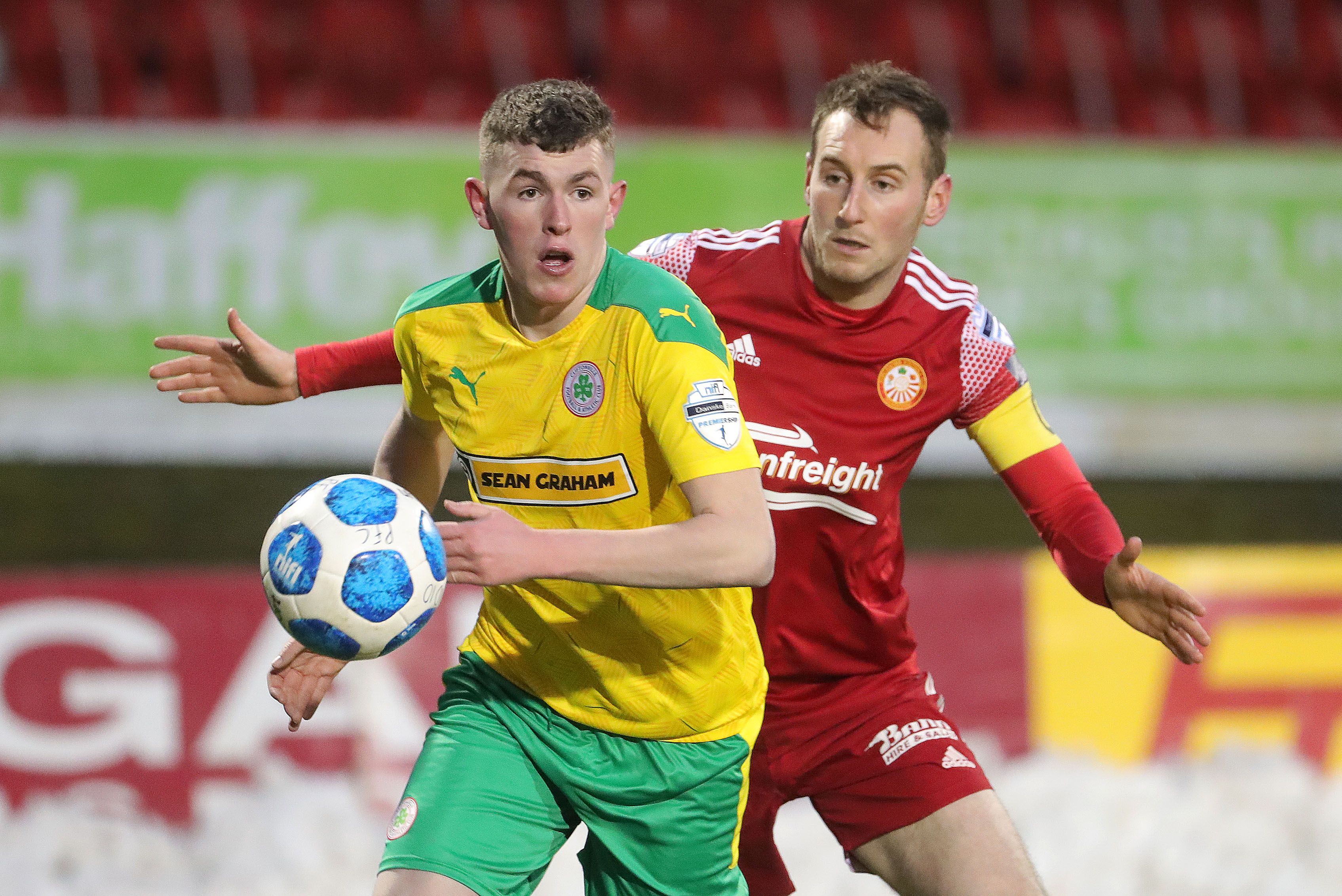 A LATE headed equaliser by Adam McCallum denied Cliftonville all three points as Portadown rescued a point in a 1-1 draw at Shamrock Park on Saturday evening.

After a goalless opening half, Rory Hale lashed the Solitude side ahead just after the hour mark and it looked to have been enough to secure back-to-back victories for only the second time this season, but Portadown restored parity through McCallum much to the frustration of boss Paddy McLaughlin who lamented the concession of another late goal.

“There were 30 seconds left on the clock and three additional minutes. We should have learnt by now to manage that situation better. A cross comes into the box and it was almost a free header from a corner.

“We’ve been here before and we’ve got to learn the importance of dealing with late crosses into the box because it’s a disappointing effect on our form leaving the ground.

“It’s a tough place to come and it was tough conditions, and I felt as if we did enough in the game to win it. We should have won it with a couple of goals to spare but we just couldn’t find that second goal and unfortunately we conceded late on. We’re definitely disappointed leaving here today.”

McLaughlin made two changes from the side that defeated Warrenpoint Town 3-0 on Tuesday evening.

One was enforced as Jamie Harney served the first of a three-game ban and Ryan O’Reilly slotted into the centre of defence. Barry Coffey also came into replace Daniel Kearns who dropped to the bench.

Portadown had the advantage of a gale force wind at their backs during the opening half and Matthew Tipton’s side started the brighter.

Eamon Scannell’s low drive called Aaron McCarey into action and a few moments later, on-loan Larne defender Ben Tilney shot high over the bar from the edge of the area.

Just before the midway point in the half, a cross from Chris Lavery was cut out by Rory Hale but Oisin Conaty reclaimed possession and shot wide of the post on the turn.

It took Cliftonville 33 minutes to carve out their first opening as Barry Coffey played the ball into the feet of Paul O’Neill whose flick on fell to Rory Hale, but Hale’s effort was bravely charged down by Paul Finnegan.

A few minutes later, Coffey teed up Aaron Donnelly from a free-kick, but Donnelly’s effort was always rising and at the break it remained scoreless at Shamrock Park.

Cliftonville began the second period on the front foot with Paul O’Neill being played down the left channel; the striker hesitated and laid the ball off to Rory Hale whose shot was blocked with O’Neill only finding the gloves of Jacob Carney from the follow-up.

O’Neill then shot across the face of goal and wide of the post minutes later and the pressure continued with Chris Curran combining with namesake Ryan whose shot was blocked by Finnegan.

Chris Curran then drew a smart stop from Carney before the deadlock was finally broken. Ronan Doherty crossed into the area and despite Portadown appeals for offside, the ball broke to Rory Hale who lashed to the roof of the net for his third goal of the season.

Cliftonville felt aggrieved they weren’t awarded a penalty in the aftermath as Chris Curran’s cross into the area appeared to cannon off the hand of Adam McCallum. However, referee Ross Dunlop and his officials were unconvinced.

With little under 20 minutes remaining, a dangerous corner from Ports substitute Sam Warde fell to Finnegan in the area, but the former Reds centre-back saw his effort charged down.

Jacob Carney then produced heroics to deny Ronan Doherty doubling the Reds’ lead with a quarter of an hour remaining and it was a chance that they would come to rue.

The Ports applied some late pressure with Lee Bonis finding substitute Stephen Murray whose effort was cleared to safety by Aaron Donnelly.

Undeterred, the hosts forced a late corner and Ben Tilney’s delivery was headed home by Adam McCallum to make it 1-1.

In a grandstand finish, both teams may have nicked all three points.

Ryan O’Reilly needed to throw his body on the line to quell a dangerous breakaway from Murray, while Kris Lowe’s cross fell to substitute Daire O’Connor whose snapshot was gathered by Jacob Carney in the final attack of the game as both sides were forced to share the spoils.