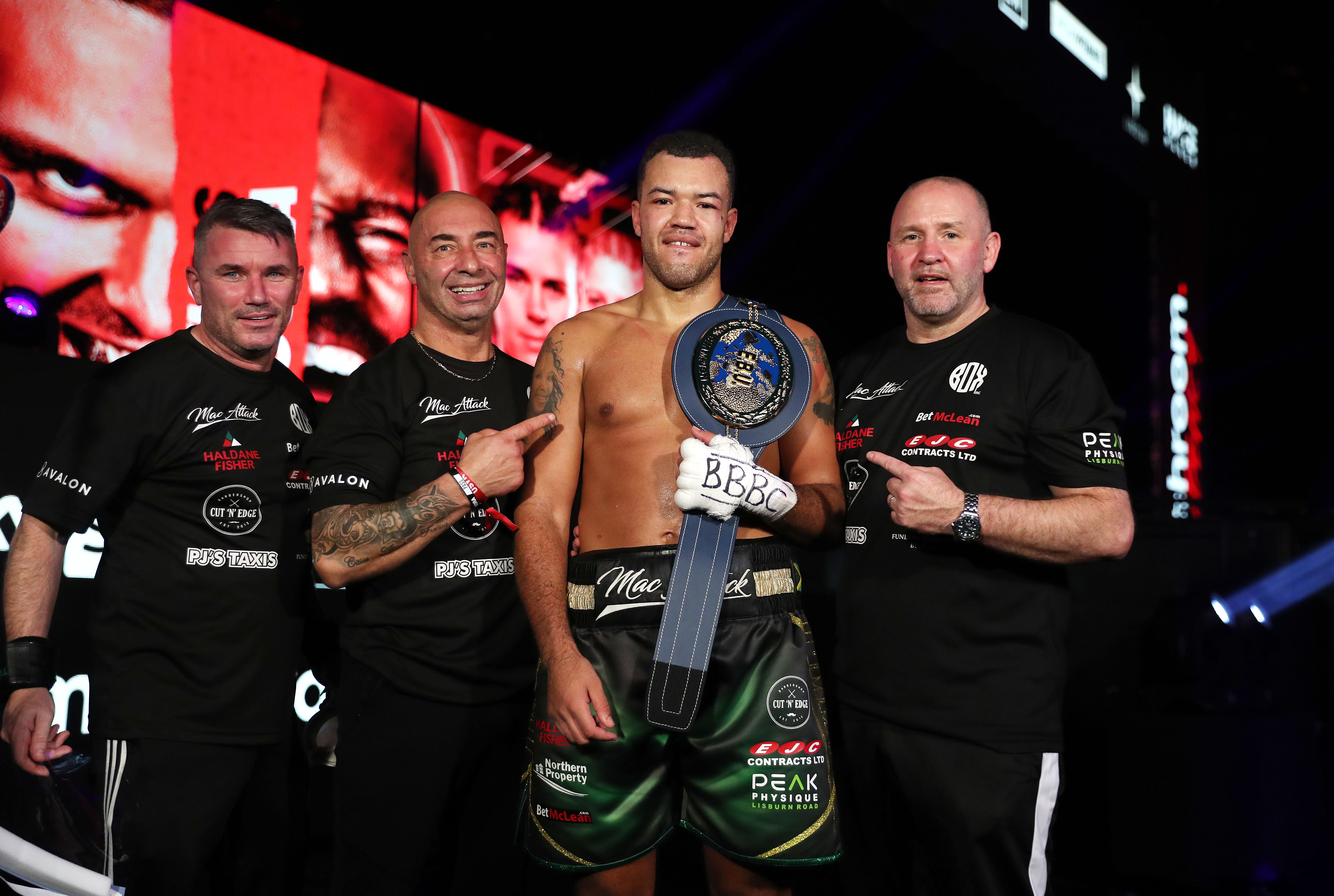 IT was a night of joy and vindication for Tommy McCarthy at Wembley Arena on Saturday as he claimed the European cruiserweight title with a majority points decision over Bilal Laggoune (116-112, 116-113, 114-114).

The West Belfast man added his name to an illustrious list, becoming the 15th Irishman to claim the iconic blue belt as he dominated for long stretches and rallied in the final round to get the nod against the Belgian.

It's fair to say @Tommymac90 is over the moon 😂👏 #UsykChisora pic.twitter.com/SGYdnR9mvj

"It feels brilliant," said McCarthy as he arrived home in Lenadoon this afternoon.

"It hasn't fully sunk in yet as you are in the 'bubble' and don't have any supporters around you.

"Now I'm home and the wife is loving it, the kids loving it and all her (wife) ones are delighted, it's sinking in a bit more.

"The more people I see at home, the more it will settle in and the realisation I'm the European champ."

McCarthy took a little while to settle, but gradually took charge with some crisp boxing and there was a case he should have been awarded a TKO victory in the sixth when Laggoune turned away and stopped, complaining of an eye injury that was caused by a punch, but referee Victor Loughlin allowed the Belgian to continue.

McCarthy's body attack was clearly making a dent in his opponent, yet a shot shot to the the head say Laggoune stagger back onto the ropes and McCarthy charged in, throwing a volume of punches that he hoped would end it, but Laggoune survived and seemed to gain a second wind in the following rounds to hint at a changing of the tide.

"He turned away and I was going to (referee) Victor Loughlin: "You can't do that", but he was telling me to be quiet and my corner was telling me the same," said McCarthy, who turns 30 on Wednesday.

"I think he was gassing and was looking a way out, but didn't want to quit himself, so was hoping the doctor would stop it.

"It was weird, but then in the ninth round I caught him and thought it was all over. Because I felt he didn't want it, I rushed him and threw a flurry of punches and was waiting on Victor Loughlin to step in, but ended up emptied the tank and punched myself out, so it took a couple of rounds to get the energy back."

However, McCarthy finished well in the final round and was a worthy winner to claim the title and a likely crack at world honours in the near future.

"I'm just honoured to be a part of an illustrious club," he said.

It was a nervous wait for the verdict to be called out with the first card, from the Belgian judge Daniel Van de Wiele, ruling a draw. However, he was overruled by Mark Lyson and Jan Christensen who scored it in the Belfast man's favour with their margins a truer reflection on the events in the ring despite tiring slightly after his assault in the ninth.

"I felt up to that point I'd won all the rounds apart from the fourth that was a bit subjective, but from one to eight I felt in control," he opined.

"I did punch myself out a bit and he got a second wind, so nine, 10 and 11 was tough for me as I was trying to find my second wind and thankfully it came in the 12th round.

McCarthy had endured something of a stop-start career and since being stopped by Richard Riakporhe early last year, has gone on a fine run of four victories that has seen him claim the WBC International and European titles that leaves him in pole position for a shot at a world title.

Talk of that can wait, as Belfast has itself a new European champion and for that alone it is a cause for huge celebration.

McCarthy paid tribute to his team and believes the best is yet to come.

"It has been a team effort over the last two and a half years," he added.

"Mark Dunlop (manager) had opened so many doors for me and stuck with me after the Riakporhe loss when loads of people thought it (career) was over. I gave him my word that wouldn't happen again and it hasn't.

"Pete Taylor (coach) has really worked brilliantly with me and brought the best lout of me. I just feel I'm getting better and better now."