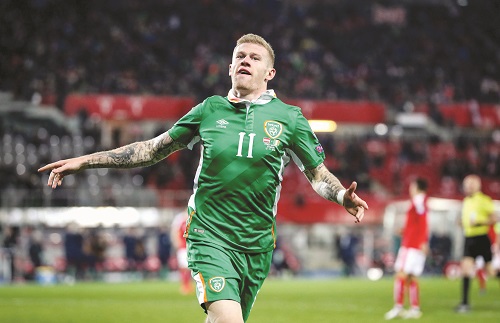 ANOTHER year, another poppyfest put to bed. As with so many other things, poppy-wearing and Remembrance Sunday came to us, largely, through the lens of television.

Not for the first time James McClean was a focal point. Given the general acceptance in the Premier League that all players’ shirts should be emblazoned with the poppy, it’s nothing short of astonishing that McClean has been able to take the field with a poppy-free shirt. Perhaps managers and clubs have used their brains and valued him on his ability to gallop down the left flank and fizz the ball in the direction of the opposition’s goal-mouth. It’s good to know not everyone in Britain is swept up on the emotional wave of poppy-wearing.

Beyond the McClean case, there are five points worth making, loudly and clearly.

1. Failure to wear a poppy does not mean failure to feel for men who died in British uniforms. Many of us have grandfathers, great-grandfathers, great-uncles or other family members who were killed in the War to End All Wars. The idea that we don’t remember them with love and respect is ignorant in the literal sense as well as insulting. To insist that there’s something missing in your caring for the dead because you don’t wear red in your lapel makes no sense.

2. The linking of the poppy to soccer is irrational and arbitrary. Although the poppy Premier League shirt has now assumed an elevated status, Premier League clubs actually began wearing the poppy on the shirt only in 2010. And while it’s true that people, including footballers, should be free to wear a poppy, the decision of the media and others to focus on footballers rather than, say, doctors or bus-drivers or boiler-engineers or rat-catchers makes little sense, except there’s some obscure desire to show that players can make £100,000 + per week and still respect the gallant dead.

3. Even a quick glance through the names of Premier League players tells you quickly that most of them are Spanish or Brazilian or German players. Foreigners. Such players are likely to have limited feelings of loyalty to or identification with men who died in British Army uniform. But when confronted with the poppy-adorned jersey and all your team-mates are slipping into theirs, it’s easier to shrug and go along. Only an exceptional man like McClean can withstand the peer-pressure.

4. Presenting the poppy as a way of remembering those who died in the First World War is misleading. The fact is, the poppy and Remembrance Sunday also honours those killed in British Army conflicts since the First World War. That includes Kenya, Malaya, Burma and of course Ireland during the Black and Tan War and our more recent Troubles. How could anyone expect Bloody Sunday or Ballymurphy Massacre relatives to wear a poppy?

5. This year Belfast’s Deputy Lord Mayor, Mary Ellen Campbell of Sinn Féin, attended Cenotaph ceremonies marking Armistice Day. Did she receive from any unionist politician thanks or congratulations for this gesture of reconciliation? I think not. Lord Mayor Brian Kingston of the DUP’s response was: “It just shows that people do have that appreciation and to show their recognition of all who served in two world wars and subsequent conflicts, and in particular those who made the ultimate sacrifice in upholding the freedom and democracies that we enjoy today.”

A word in your shell-like ear, Lord Mayor. The First World War was a brutish clash between two competing empires, which devoured the lives of millions of misguided young men. It had nothing to do with securing freedom or democracy. Neither did the British Army’s participation in conflicts in Kenya, Malaya or Ireland further freedom and democracy. A case might be argued for the Second World War as an instance of defending freedom; but in most other cases listed, the British Army’s role was, if anything, in opposition to freedom and democracy.

It’s surely time that nationalists and republicans made clear their position on this annual commemoration, one which tends towards glorification of military violence rather than regret at the loss of so many young lives. We should remember our dead, but we shouldn’t use their deaths in an attempt to justify the unjustifiable.