McComb aiming for the perfect 10 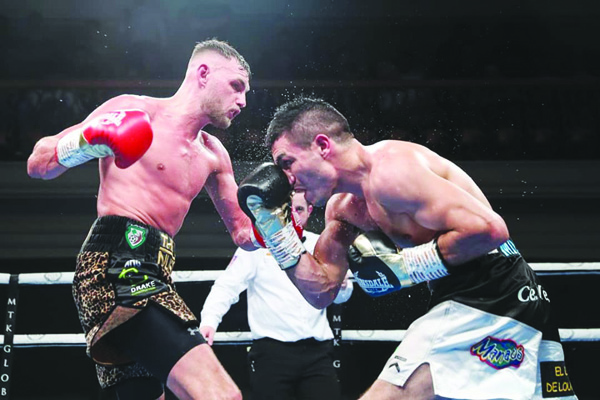 IT’S been quite a start to life as a professional boxer for Sean McComb who is planning to make it the perfect 10 at the Ulster Hall on Saturday night in a major step-up against Argentina’s Mauro Maximiliano Godoy (MTK Fight Night live on You Tube and ESPN+ in America).

The former Latino champion is vastly experienced with a 32-5-1 record and not the typical opponent for a fighter in just his 10th outing, but this is a measure of how far McComb has come in such a short space of time since leaving the amateur scene behind.

Of the vast number of boxers who have made that switch in recent years, McComb has been the most impressive and has ticked the boxes with the level of opposition increasing with each outing.

Not that he’s had it all his own way, as last time out against another Argentinian: Emiliano Dominguez Rodriguez, the Turf Lodge man suffered cuts above both eyes and was cropped by a body shot in the fourth before going on to win on the cards.

So, it is fair to say he has far from a padded record and is only too happy to take another risk this Saturday against Godoy in what is his first 10-rounder.

“He has huge experience with 38 fights; some amateurs wouldn’t even have that,” said the 27 year-old.

“He has a good knockout record too, so I know I have to be switched on for the full 10 rounds. He’s a good right hand and great punch selection, so that means I need to be fully switched-on with my defence and my own ability to get my own punches off.

“I’m still learning and still a novice in the pro game. Going into my 10th fight now as a pro means it’s time to start stepping it up and pushing on towards titles and up the world rankings.”

‘The Public Nuisance’ does not lack ambition and should he pass Saturday’s test, then it may be time to fight for a belt next time out.

There is always the temptation for a trainer or manager to try and hold a fighter back who has made rapid progress, but McComb says he wants to keep pushing on rather than staying at a level and has praised his team for backing his ambitions.

“I just have to believe in my own ability,” he continued.

“It’s been step-by-step with MTK, but then I’ve been asking to be pushed on and up to now it’s been perfect. The matchmaking has been phenomenal and it’s pushed me in the direction to where I want to go.”

Things have been a little quieter behind the scenes for the West Belfast southpaw who trained with Danny Vaughan in Glasgow.

Previously, he had familiar faces sharing accommodation and camp with him in Scotland, but with Paddy Barnes retiring and the decision of Tyrone McKenna and Tyrone McCullagh to switch trainer to Pete Taylor, McComb is now the sole Belfast boy in the gym. While that has its obvious negatives, there are also plusses.

“It’s a lot quieter and took a bit of getting used to, but I got there in the end,” he reports.

“It was strange at the start having nobody else here and trying to get my timing right, but I’ve found my feet and enjoying it.

“I’m getting more one-on-one coaching time with Danny then when I’m done I can come back to the house, switch off and read a book or watch the TV.”

That private tuition with Vaughan ought to manifest itself with even better performances and that is bad news for Godoy this weekend.

McComb is determined to push into the elite level and his timing couldn’t be better with a huge 2020 for boxing in Belfast on the cards as it seems certain that both Carl Frampton and Michael Conlan will fight for world titles on home soil.

A worldwide audience could therefore be exposed to McComb in title action as he looks to push on, even though he revealed his weight will start to come down.

“I just want a good win this week that’s it,” he stated.

“This will be my last fight at 140 (lbs) before I move down for one or two to see what options I have.

“All of the (super-lightweight) belts seem tied up at the minute with Sam Maxwell holding the WBO European title and who is my stable-mate; Tyrone McKenna has the WBC International and he’s a good friend of mine so that’s not going to happen; others who hold belts but won’t fight me until I’m mandatory and that could take three or four fights.

“I think the best is to go down to lightweight and see what I can pick up there, but if an option comes up at super-lightweight then I have the option of both and I’m happy to do that.”