McComb determined to add to his medal collection in Hamburg 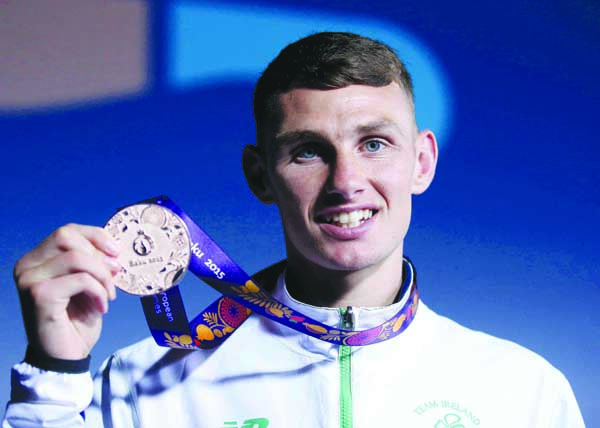 THE decision to stay with the amateur code was one Sean McComb made at the start of this year with the World Championships in mind.

The Holy Trinity man now gets his opportunity to prove he is one of the top light-welterweights on the planet in Hamburg when he embarks upon his third World Championships that will begin for him on Friday.

In his last two outings on the world stage, the Turf Lodge man boxed at lightweight, losing out to Elvin Isayev in the last 16 in Kazakhstan 2013 and then to Albert Selimov at the same stage in Doha 2015.

However, the move up in weight appears to have benefitted the 25 year-old as he twice this year defeated World champion, Vitaly Dunaytsev of Russia.

One of those victories came in June’s European Championships in Ukraine, but he was then left cursing his luck following a controversial loss to England’s Luke McCormack that saw him miss out on a medal, but did ensure he qualified for these World Championships thanks to his last eight finish.

“It’s just boxing, it always happens,” he says of that disappointment.

“It’s something I have said so many times that it always happens always will happen.

“You have five judges around the ring with their own opinions, but I just took the positives from it.

“I analysed the fight and I know exactly where I’ve went wrong and what did work. Next time it will be taken out of the judges’ hands.”

Those victories over Dunaytsev – at the time also world number one – would be enough to fill the West Belfast man full of confidence going into this competition and while he agrees they were fantastic results, going to Germany they only mean he is now a marked man and one each boxer at 64 kgs will have their eye on.

“They are very good wins, but they don’t matter anymore,” he counters.

“It’s just a clash of styles and he won’t even be at the Worlds now. It’s great to have him out of the way as it’s one less challenge for me.

“I’m sure there are a lot of other boxers going to the World Championships glad to see he isn’t there too. It’s just about being able to adapt to the different styles.

“He was a tricky counter-puncher, but then I’m a tricky counter-puncher. It was good to get the wins at the time and obviously, people are going to respect me a lot more coming in knowing I have beaten him. He was a big name and I wasn’t with it my first year boxing at 64 (kg), but beating him at the Europeans means the rest will have a bit more respect for me getting into the ring.”

It certainly won’t be a step into the unknown for McComb who is entering his third World Championships although the need to qualify for this and the last edition means there are absolutely no soft touches anymore.

That is fine with him and the opportunity to test himself against the best is the reason he decided to continue boxing in the vest for this year.

Winning a medal at these Championships is the goal he has set and he is confident he can do just that.

“The first Worlds I went to was an open competition in that there you didn’t have to qualify for those ones in Kazakhstan so there were a lot more people,” he recalls.

“These are like the last ones (2015) because you had to qualify so you know it’s going to be a hard draw from the beginning.

“There is no easy draw as you have the top eight in Europe, top eight in Asia and the top four in the Oceania Games have to qualify so it’s going to be tough no matter what.

“These are the World Championships, it doesn’t get any bigger.

One who does have a medal and a gold one at that is his friend and former Irish teammate, Michael Conlan who became world champion back in 2015.

Having broke Ireland’s duck by winning gold in Doha, McComb says there is a renewed confidence in this Irish team they can emulate Conlan and top the podium and he is one of those who believes he can deliver on the big stage.

“A gold was always the medal Ireland was missing, but now Mick has gone and won one, he has put the belief into the country it’s possible,” he stressed.

“I believe in myself anyway that I’m good enough to go and win a gold medal. There are obviously all these things that come with it, these one per cents and making your own luck.

“If you do that and perform well the whole team has every chance of doing well. We have all been working hard, that’s the main goal for everyone. We’ll just take it step-by-step until we get there.”