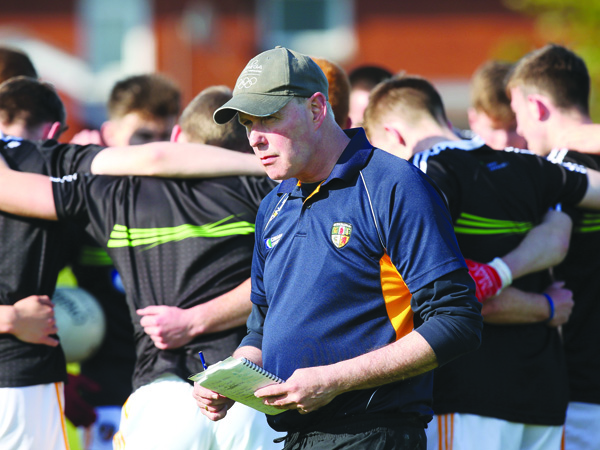 WHILE the Ulster Senior Football Championship started off with something of a whimper, the Minor Championship has produced a series of thrilling encounters.

Antrim’s dramatic extra-time victory over defending provincial champions, Donegal was among the pick of the first round games and the Saffrons will be aiming to repeat their heroics when they take on Derry at Clones on Sunday.

The Rossa clubman felt his side were driven by the hurt of last year’s narrow quarter-final defeat to Donegal in Corrigan Park as they pulled off a surprise win in Ballybofey.

“After last year, it was great to go there and win after extra-time,” said McGettigan.

“Every time they scored, we dug in and tagged a point back and gave ourselves the opportunity to be close to them towards the end.

“The last couple of points from Ruairi Brolly really lifted the team and Tiarnan McAteer from Creggan got the winning point.

“We were just delighted to get over the line. After what happened last year, we were determined it wasn’t going to happen again.”

He added: “It was mentioned a lot, the fact that we had come close but it wasn’t good enough.

“People had talked about how good the game was and that there was a big crowd in Corrigan Park, but it was very disappointing for the lads that we didn’t get over the line.

“Donegal then went on to win Ulster and did well in the All-Ireland series, so it was tinged with a bit of regret that we could have put them out.”

Antrim were much the better side in the opening stages of last month’s quarter-final with Creggan’s Liam Quinn proving a handful, but a fortuitous goal from Peadar Mogan kept Donegal in touch.

Donegal assumed control in the second period and it took a late free from Quinn to force extra-time.

With the stands and terraces filling up, the home side were cheered on by the vocal Donegal support and they looked to have secured victory when Oisin Gallen bundled home their second goal in extra-time.

However, Antrim refused to wilt and a brace of points from substitute Ruairi Brolly and a late winner from Tiarnan McAteer gave the Saffrons a famous victory.

McGettigan revealed that Antrim had prepared to deal with the hostile atmosphere in the build up to the game.

“We had talked about the partisan crowd that we were sure would arrive,” said McGettigan.

“The stadium had 10,000 people in for extra-time and most of them were from Donegal. We knew we had to cope with that.

“We worked on that in the build up and (Antrim assistant) Séamus Ó Tuama had worked from a sports psychology point of view on how to deal with crowds and particular situations.

“As it turned out, everyone who arrived early got their money’s worth. It was a very exciting game, plenty of mistakes on both sides, but we just managed to win out in the end.”

After witnessing his side do the business over Donegal, McGettigan was able to take in Derry’s victory over Tyrone the following week in order to get a first hand look at Antrim’s semi-final opponents.

After Tyrone won the Ulster Minor league, many people had fancied the Red Hands to strongly challenge for Ulster and All-Ireland honours.

That Tyrone’s U17s won the Ulster Championship with a comprehensive 3-14 to 0-6 win over Cavan last weekend has franked the form of Derry’s win.

In McGettigan’s opinion, the Oak Leafers are strong favourites for Sunday’s provincial semi-final.

“At one stage during the course of the first half, you thought that Tyrone were going to be runaway winners,” reflected McGettigan.

“Just before half-time, they had a really good goal-scoring opportunity.

“Darragh Canavan was through and he put the ball over the bar, but there was an opportunity there for a goal.

“We weren’t surprised at how Derry came back. We always felt Derry had a good bench and they were relaxed even though they were a few points down.

“Once they started making changes, they really had an impact.

“In the first round of the Championship, maybe you don’t know your best team, but I think Derry have found the right formula.

“We are hoping the experience we gained from the Donegal game will carry us through the next day.”

While Antrim will be aiming to reach their first Ulster final in over a decade, Derry are vying to make it to the provincial final for the third year in succession after winning the 2015 title before losing out to Donegal in last year’s decider.

McGettigan feels Derry could have their sights set on bigger prizes, but believes reaching an Ulster final would be a massive boost for Antrim football.

“Derry would probably have ambitions of winning the All-Ireland,” added the Rossa clubman.

“If we are going to defeat Derry, we will have to play to the top of our game.

“It would be a great boost. It was 2006 when Antrim were last in the minor final.

“I think you have to go back to 1982 since Antrim last won an Ulster minor title.

“To even get to the final would be good for this bunch of players.”

Antrim, while cast once again the role of underdogs, will have every reason to believe they can defeat Derry.

Prior to beating Ulster champions Donegal in their own backyard, the Saffrons had lost to Donegal by two points in the Ulster Minor League.

When Antrim hosted Derry back in March, just a point separated the sides.

Another close, tense battle is likely to unfold in Clones, but Antrim showed enough character in Ballybofey to suggest they can return to St Tiernach’s Park for the Ulster final next month.