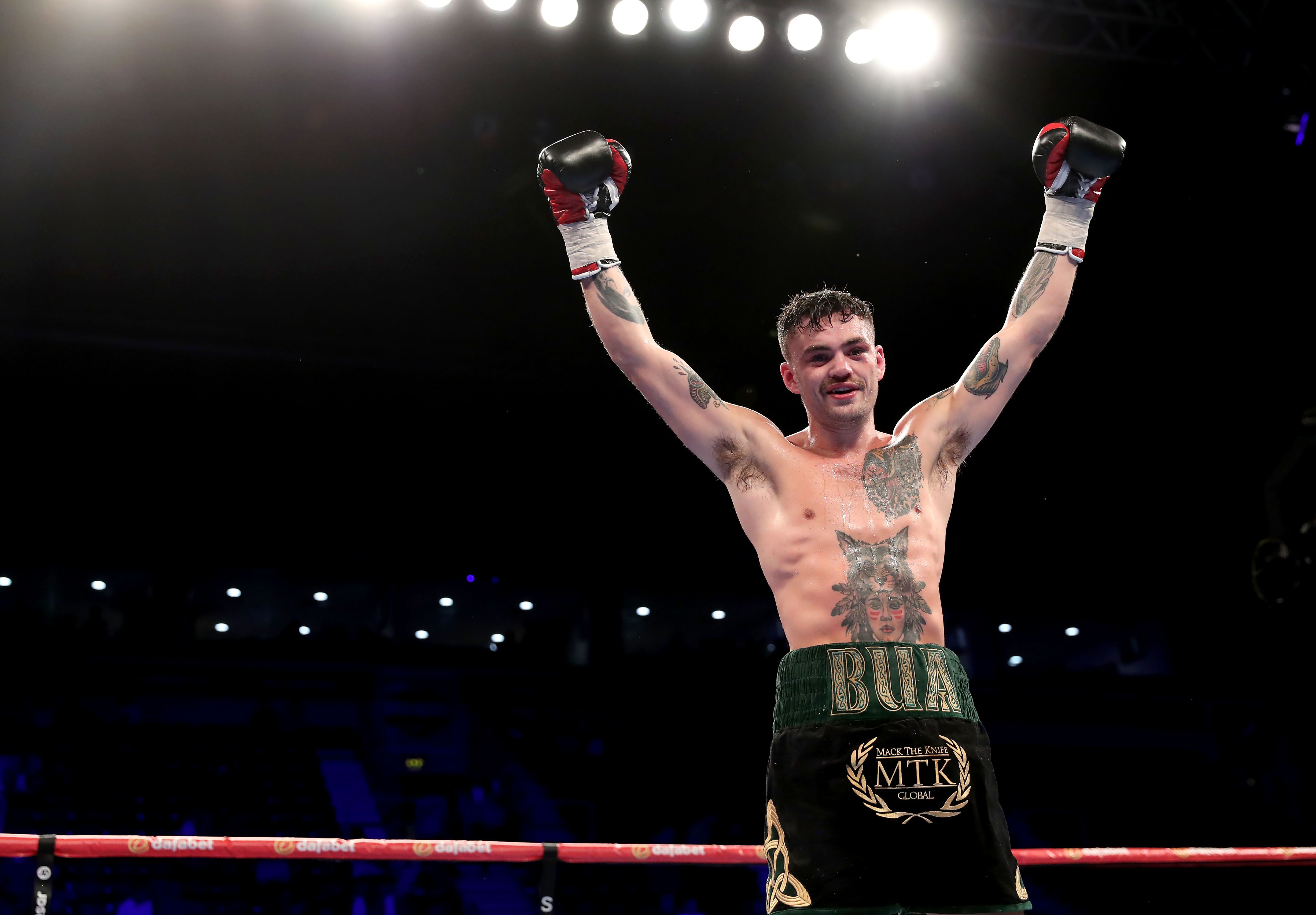 IT would be fair to say that Tyrone McKenna couldn’t possibly have any more on the line than what is on offer against long-term foe Ohara Davies in Wakefield on Wednesday (live on Sky Sports).

To suggest there has been a bit of needle between the pair in recent years would be an understatement, but this fight is about much more than settling a grudge; it’s about emerging victorious from the light-welterweight ‘Golden Contract’ tournament that will see the winner pen a hugely lucrative five-fight deal with a top promoter and earn life-changing purses for major title fights.

McKenna and Davies have engaged in plenty of verbal sparring and almost came to blows in a car park at a show in the York Hall last year, but next weekend the score will finally be settled with the winner moving onto the opportunities every fighter aspires to.

This is a fight ‘The Mighty Celt’ has craved for a number of years and with both entering the eight-man tournament, it seemed inevitable their paths would eventually cross, but both had to negotiate quarter-finals and semi-finals to reach this point.

McKenna won a wide points verdict against Mikey Sakyi in his opener but found the going much tougher against the highly-rated Mohamed Mimoune, squeaking home in a fight some opined had gone the other way.

Davies’ path was a little more straightforward with stoppages against Logan Yoon and Jeff Ofori but it all culminates with the pair squaring off to settle the score next week.

“I’ve been talking and asking about this fight for about four years and now it’s here,” said the 30-year-old Lenadoon man.

“I’m buzzing now, really enjoyed this camp and the build-up. The excitement ahead of this massive showdown and life-changing opportunity...

“It’s not just the fight I’ve been asking for over the past four years, but this opportunity of a lifetime and that’s something I’m really looking forward to.”

The semi-finals took place in late February, prior to the lockdown measures that forced sport to take a back seat so both men have had to bide their time for this final.

McKenna admits he had some concerns whether it would actually take place, but with so much at stake, he was not taking any chances and spent the downtime keeping himself in shape so that when the call came, he would be ready for his showdown with ‘Two Tanks’.

“I was thinking if it (Golden Contract Tournament) was even going to finish, if they were going to call it off or what,” he admitted earlier this week having just finished his final sparring session.

“It would just have been typical had I got to this stage then the whole thing was off due to Covid.

“Then I was wondering if it would be held this side of Christmas and should I start training but I kept on top of things because this is a massive opportunity and I didn’t want to be caught short if they said I was fighting in four or five weeks.

“I had been dieting as hard as I could during lockdown, did as much training as I could and when I got the date it turned out to be the perfect time to get into the best shape that I could.”

The Belfast southpaw is now under the guidance of trainer Peter Taylor who not only guided his daughter, Katie, throughout most of her amateur career, but has gone onto mastermind some huge wins for Tommy McCarthy and Luke Keeler in the professional arena.

McKenna hooked up with the Bray resident ahead of his semi-final with Mimoune, but feels they were just adapting to each other in that fight.

Having now gelled as a team, McKenna is of the belief his performance will be much more in the mould of his trainer and he will be less willing to ditch the game-plan and have a tear-up that could be to his detriment.

“Before the semi-final, I’d only eight weeks with Pete Taylor and now it’s been eight months so maybe been a bit of a blessing,” he suggests.

“I think he’s one of the best coaches in the world - just look what he did with Katie Taylor.

“His credentials speak for themselves so I have real faith in everything he says and now after nearly a year, I’ve started to box the way he wants me to and the way I know I can and should be.

“He has a game-plan and I think with no crowd here I will be able to stick to that game-plan better than I usually do. I’m a fighter who likes to fight for the crowd and if there is no crowd there, the only person I can please is Pete and I’ll listen to what he says. I think the game-plan he’s come up with is the perfect one to beat Ohara Davies.”

Davies and McKenna have both previously lost to Jack Catterall with the Londoner also suffering a past defeat to now-unified light-welterweight king Josh Taylor.
The 28-year-old carries power in his fists but can be a little ragged at times so for McKenna, discipline is key in this fight.

Standing at 6’ 1”, the Belfast man will enjoy a considerable advantage and that should allow him to keep Davies at bay from the outside if he can stick to a rigid plan and box to orders.
He believes he has a better skill-set and intends to prove that on the night, refusing to let the emotion of going in against his arch-nemesis dictate his approach.

“When you watch fighters during camp, I always see the best of them with fast combinations like Manny Pacquiao or (Vasilly) Lomachenko,” he explained.

“When I watch Ohara, I just see flaw after flaw as he has such slow feet, his hands aren’t fast and doesn’t have a great defence. He is awkward how he stands, has very long arms and hits hard, but they are his attributes.

“He does use them well, but he has plenty of flaws and things I’m much better than him at, so all I can see here is a comfortable win.”

He continued: “I wouldn’t say I hate him as I hate nobody. I wouldn’t waste energy hating on anyone, but he’s not my cup of tea or a person who I am going to like. He likes to run his mouth, so I’d like to put him into retirement.

“I don’t want to hear any more about Ohara Davies after this as I don’t believe he belongs at this level and I think you’ll see that on the night.”

Winning this grudge match and settling a long-standing argument with Davies would usually be reward in itself, but the main prize is that ‘Golden Contract’ that will be life-changing for McKenna and his family.

He has worked his way up the rankings from the small hall to the undercards of some of Belfast’s superstars, delivering entertainment along the way and proving his fighting heart.

“There is too much on the line. It’s completely life-changing, not for me, but for my kids and my missus, so there’s lot riding on this fight and I don’t think there is anyone who could beat me with this much on offer.

The reward for all of those efforts in a 23-fight career  now sits in front of him and he fully intends to take it with both hands to burst onto the world scene and perhaps get a crack at one of the division’s champions in Taylor (WBA and IBF) or Jose Ramirez (WBC and WBO) in the future.

As highlighted in last week’s excellent True North ‘When Boxing Ends’ documentary on BBC - in which McKenna featured - the financial realities of boxing don’t stack up to the fantasy for the vast majority of prizefighters, but the performance of his life next week and victory he is  capable can see him secure that life-changing contract that is only the preserve of the few who lace up the gloves.

“This is a big stepping-stone into superstardom, so in my mind I can’t lose,” he insists.

“There is too much on the line. It’s completely life-changing, not for me, but for my kids and my missus, so there’s lot riding on this fight and I don’t think there is anyone who could beat me with this much on offer.

“This is the most important fight of my career, no matter what happens after, because this is the life-changing opportunity.

“It’s all I’ve thought about going to bed at night, waking up in the morning or in training. Ohara Davies is the only one standing in the way of me taking this opportunity, so I’m ready to capitalise.”