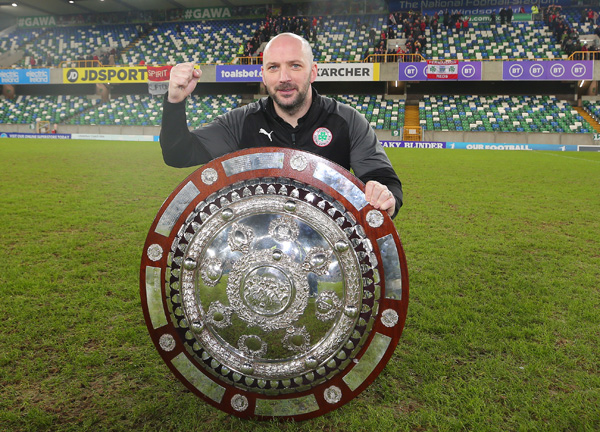 The Reds battled back from Leroy Millar’s early opener in the second half to stage a smash-and-grab 2-1 win and McLaughlin felt his side emptied everything into their search for a route back into the game.

“To get the equaliser, we were happy with that and to go into extra time because I thought the momentum was with us. But to go and win it a minute later was an incredible finish to the game. It’s a sore one for Ballymena if you’re a Ballymena fan or player tonight. I’m sure they’re going back absolutely devastated at losing the game in the 97th minute. Unfortunately someone had to lose and you don’t want to see young players going off with their heads down but you can’t take it away from our boys. They gave it everything and they probably slightly deserved it in the end.”

McLaughlin refused to take any credit for substitutes Thomas Maguire and Ryan Curran popping up with the late goals, but he praised the duo for putting their personal disappointment to one side for the good of the team.

“The players on the pitch did the business,” he added.

“The players on the pitch worked Ballymena really hard, they tried their best to work opportunities, Ballymena defended brilliantly well, you can’t deny them that, but when the seven minutes went up we looked like we had a goal in us. I was just hoping it wasn’t going to be one of those days where it would be a sad story – could we have done this and should we have done that?

“I felt we would get one chance in that seven minutes and take it to extra time, I felt we were finishing the game the stronger. For Thomas [Maguire] and Ryan [Curran] to pop up, fair play to them because I’m sure they were disappointed not to be starting the game. They put their own personal disappointment to one side to go and do a job for the team.”

Such was the intensity of that seven minutes of madness, McLaughlin was unable to remember his feelings during the late drama but acknowledged the backing of the Red Army and paid tribute to their “incredible” support.

“I pulled two hamstrings running on to the pitch celebrating and anything after that, I don’t know what happened,” admits McLaughlin.

“That was incredible support that Cliftonville brought tonight in the County Antrim Shield on a Tuesday night. I think there is only one team in the division that has that support and it’s Cliftonville. You saw what it meant to the players and supporters from the goals went in. My mind went blank straight away and only now am I settling down.”

Tuesday’s victory ends a four-year wait for silverware and McLaughlin hopes it will give his players a taste for future success.

“Sometimes the first trophy is the hardest one to get.

“I didn’t come here to make up the numbers, I came here to try and establish Cliftonville back as a contender for the division and as a team who should be challenging to win trophies.

“If I didn’t see that potential in them, I wouldn’t have come up,” said the Derry man. “When I see the quality within the playing squad and the support they get when things are going well, when I see how hard they work, I know they’ve got potential to win trophies. All that hard work’s been justified tonight.

“It’s one trophy but we’re not going to rest on that, we want more. It’s such a young squad and for a lot of them it’s their first senior medals. Hopefully now they’ll get that appetite for success and to challenge for trophies even more and you never know where this team might go.”