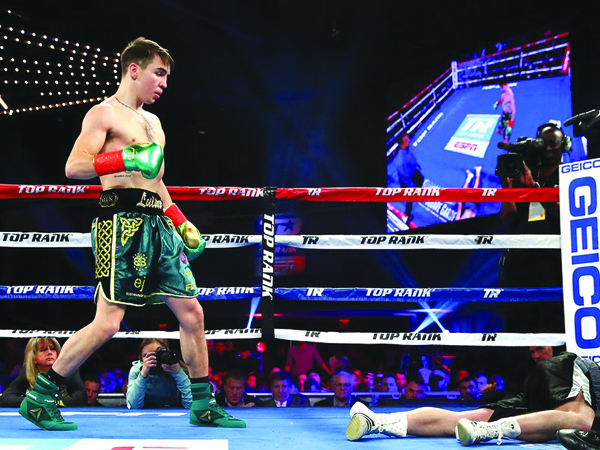 THE clock is now ticking ahead of Michael Conlan’s eagerly-anticipated homecoming following his latest victory at Madison Square Garden’s Theatre on Saturday night.
On a huge day for Irish sport, it was the West Belfast man who signed off on a glorious St Patrick’s Day with a hugely impressive second round win over David Berna to get what promises to be a big 2018.
The victory saw his professional record improve to 6-0 with five of those by stoppage and his third in the iconic New York City venue.
While he is revelling in being something of a house fighter and mainstay of one the world’s most famous arenas, there’s no place like home and fans will get their chance to be a part of the ‘Conlan Revolution’ in the summer.
“I will be in Belfast in June,” he confirmed in the corridoor outside his dressing room after the fight.
“There’ a chance I will be on the Lomachenko-Linares card (May 12 back at Madison Square Garden). That would be a good one to be on. You can see the atmosphere I bring to the Garden, they would want that, but Belfast has to happen this year.
“The Garden have treated me like a king and I want to thank them for that. Every time I come here they treat me very special. I’m sitting in VIP booths at (New York) Knicks games, at hockey games in VIP areas with all these celebrities. It’s crazy really, but they make me feel at home and it’s a pleasure to come here.”
The pleasure was all ours at the weekend as the fans yet again traversed the Atlantic in their thousands to raise the roof on this most Irish of days.
It is a measure of where Conlan stands that his fight – technically a co-attraction alongside the WBC light-welterweight showdown between Jose Ramirez and Amir Imam that was won by the Mexican after 12 thrilling rounds – was the main event given the vast majority of the green-clad crowd of 5,000 had come to watch him do battle.
And the fans certainly made their presence felt, ole ole’ing their way through the night, reaching a crescendo when the Belfast man appeared in the area for his drawn-out ring walk.
This was a fight in which Conlan was heavilly fancied to prevail, his first with new trainer Adam Booth and he was the boss from the start, popping out the jab from orthodox before switching to southpaw.
This proved to be a clever move as the gaps then began to appear in Berna’s previously tight guard and a sickening left to the body left the Hungarian crumpled him in a heap on the canvas.