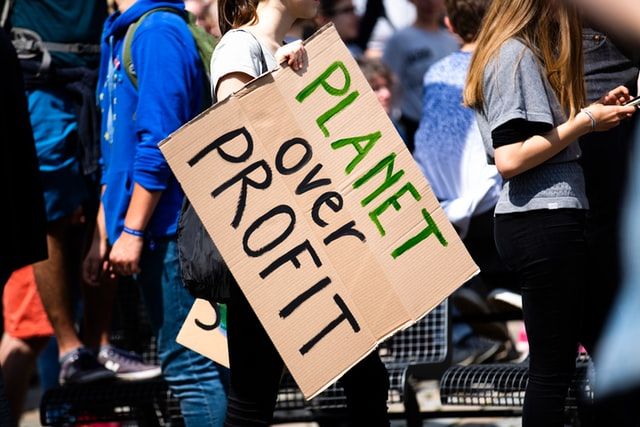 Milan, September 2021. Youth4Climate delegates from all over the world meet in an attempt to goad environment ministers into radicalising their commitments for COP26 to be held in Glasgow in November. Towering over the speakers’ podium is a huge screen showing Alok Sharma MP, Minister of State at the Cabinet Office and the man appointed by Boris Johnson as President for COP26. Unlike the fictional “Big Brother is watching you” figure in Orwell’s Nineteen Eighty-Four (written in 1949), Sharma looks miserable and distinctly uncomfortable as two keynote speakers take to the podium.

First up is Vanessa Nakate from Kampala, Uganda, the founder of the Rise Up Movement.  Uganda has “one of the fastest changing climates in the world”.

She points out that the continent of Africa is the lowest emitter of CO2, responsible for just three per cent of global emissions but has to deal with climate change-related floods and droughts on a massive scale. In Madagascar, it has not rained in four years and people are reduced to eating locusts. The UN says the country is facing the world’s first climate change famine. You can’t eat coal and you can’t drink oil.

And yet Africans are already suffering some of the worst impacts of the climate crisis! Droughts, floods, hurricanes. Many people have lost their homes, lives, farms and businesses. Fight climate injustices ⁦@FFFMAPA⁩ #UprootTheSystem pic.twitter.com/FUln5PRmUd

Vanessa is probably best known for her absence rather than presence. This is because Associated Press famously cropped her out of a photograph of young activists attending the World Economic Forum in Davos in January 2020, preferring the white faces only.

Next up is Greta Thunberg from Stockholm, Sweden, who gave her much-reported “30 years of blah, blah, blah” speech. She says that one-third of global emissions have been released since 2005, decades after fossil fuel companies themselves knew we had a global warming problem. The climate crisis, Greta says, “is only a symptom of a much larger crisis, a sustainability crisis, a social crisis, a crisis of inequality that dates back to colonialism and beyond”.

“We can no longer let the people in power decide what hope is. Hope is not passive. Hope is not blah blah blah. Hope is telling the truth. Hope is taking action”
My speech at #Youth4Climate #PreCOP26 in Milan. pic.twitter.com/BA62GpST2O

It is easy to feel helpless and hopeless when faced with the nature and scale of the climate crisis. But the youth activists say that hope lies in taking action, in people and communities taking action. So the first step is not to be overwhelmed by the devastation taking place around the globe or to be defeated by the din of arguments we hear on a daily basis, many of which push us into passivity or towards thinking that this is all someone else’s problem.

You know the kind of thing: “Ireland’s CO2 emissions are tiny compared to the big polluters”: the USA, China, Russia, Germany and Britain. “We cannot afford to reduce the agriculture sector because rural economies and communities will collapse” is another argument. Increasingly we hear that fossil fuels are needed “to fall back on”, to bridge the gap between the output of renewable electricity generation and the need to keep data centres running, because “there wasn’t enough wind last year”. You even hear vegetarians justifying long-haul flights on the grounds that they have spent their whole lives not eating carbon-intensive meat, as if they have a carbon savings bank they can draw on. And anyway, “air travel only accounts for a small percentage of global emissions”.

Animation: The countries with the largest cumulative CO2 emissions since 1750

On previous occasions this column has argued that the climate emergency primarily requires a radical reduction in fossil fuel use – NOW. This will not be achieved without co-ordinated international action (COP26?) to wind down the fossil fuel extraction and to transform the carbon-intensive industries such as steel and concrete production. For households in rich countries, this is mainly about de-carbonising transport and domestic heating. Change will be disruptive and possibly conflict-heavy so no wonder progress is slow or non-existent: on present trends we are going backwards for some years to come. The oil and gas companies are fighting hard to prevent their assets becoming stranded and worthless.

The policy debate on the way forward is nowhere near settled as the discussion continues over the merits of emissions trading systems (e.g. the EU and China), and carbon taxation (e.g. Sweden, Canada, South Africa). Most countries are reluctant to introduce new taxes on carbon emissions, especially in the absence of alternative transport systems and domestic heating methods. You can carbon tax petrol so aggressively that you push people into buying electric cars. Likewise, you can try to tax oil and gas heating out of the market. But these are hardly vote winning policies, especially when alternatives remain expensive or unavailable, and issues of fairness come into sharp focus.

There are of course optimists who argue that rapid change is coming about through technological innovation. For instance in the energy field, power generation from renewables – mainly solar/photovoltaics and wind – and new battery storage technologies, are already cheaper than coal, gas and nuclear power, and will quickly replace them through market forces alone, argues RethinkX.

Decarbonizing the global economy may not be as complicated as we thought. Check out our guide for COP 26: https://t.co/DM1nnb9Ek3#RethinkingClimate pic.twitter.com/hHYPFRtv6J

But as things stand, at least half of the decarbonisation agenda impacts directly on households and individuals, so what are the alternatives here? What contribution could consumer and lifestyle choices make to reducing CO2 emissions? Some opponents of carbon taxation propose individual carbon budgets or allowances instead. Carbon would be rationed and every purchase would involve a deduction from your carbon card as well as your bank card.

It's too late for carbon taxes: too slow & massive gaps in coverage. To drive through the necessary energy transition, we need supply controls. Including a market for carbon currency, bringing efficiency & a price signal. Exponential, not creeping, change. https://t.co/nmmmTKDbGz

Carbon Watchdog says that a carbon price should be put on every product and service. Everyone would be allocated so many credits which, if underused in a year, could be sold on to others who may have exhausted their allowance but still want to travel somewhere, for example, or to eat more meat. Potentially the market in credits could redistribute income from heavy to light carbon users: there are CRAGS (voluntary membership carbon reduction action groups) which do just that.

Such carbon rationing schemes have been tried out in Finland and elsewhere for transport. But to be scaled up to all products and services at national and international levels would require a massive effort in carbon pricing, trading systems and regulation. Tesco started carbon labelling all their goods in 2007 but abandoned the project in 2012. Carbon labels are creeping back in though, with the meat substitute company, Quorn, adopting the practice (like Oatley, the milk substitute company), followed by Unilever.

The dystopian version of decarbonisation involves annually decreasing rations, enforced by totalitarian systems of control. The longer action on CO2 emissions is delayed, the more drastic the rationing could become and the more likely we face a future of intense competition for planetary resources, between continents, countries and peoples.

One way to look at personal responsibility, assuming you have choices, is to consider how you might reduce your carbon footprint by six or seven per cent each year, which is approximately the global challenge facing the planet. Could you fly less, or not at all? What choices are there for using a petrol/diesel car less and public transport more (or walking/cycling)? Could you survive with less heat in the house, by eating less meat and buying fruit and vegetables from local sources? What about using less water (the Water Service is a huge consumer of electricity at pumping stations)? Or what about buying less goods that have been shipped halfway round the world, getting into “upcycling” and embracing the “circular economy”? Email, internet browsing and streaming services all have a carbon footprint, typically measured in kilograms of CO2 equivalent (don’t start on imperial measures).

Personal responsibility doesn’t stop at consumption. If you contribute to a pension scheme, is it still investing in fossil fuels? What is the scope for raising the issue of carbon emissions in the workplace, in your trade union? And then there is public activism.

At last there is some movement on the policy front. There are three climate-related bills under consideration by the Assembly. First, Green Party Clare Bailey’s Climate Change Bill establishes targets for reducing CO2 emissions and a planning framework for achieving these. The Climate Change No. 2 Bill is sponsored by DUP Minister Edwin Poots. It is similar but with less ambitious targets. Finally, there is Sinn Féin’s Small-Scale Green Energy Bill. This guarantee payments for any surplus electricity from renewable sources supplied to the grid by farmers, small businesses, schools, community groups and individuals. John O’Dowd describes this as introducing “energy democracy” to the generation of electricity. A similar scheme – the “clean export guarantee tariff” – is under consideration in the Republic where some 20,000 small scale producers are in a position to contribute surplus electricity production to the all-island grid.

Today I opened the debate on the Second Stage of my Small Scale Green Energy Bill in the Assembly.

If we embrace its potential the green economy will bring new jobs and industries, new technologies and newly empowered communities. pic.twitter.com/fkXC8KXiST

But none of these bills will end up as law because, we hear, it may be necessary to collapse the Assembly as the Protocol is such an unworkable disaster – unlike Brexit’s smooth progress in Britain with its labour shortages, collapsing public services and disrupted supply chains. Take your pick: the DUP’s existential crisis or the planet’s.