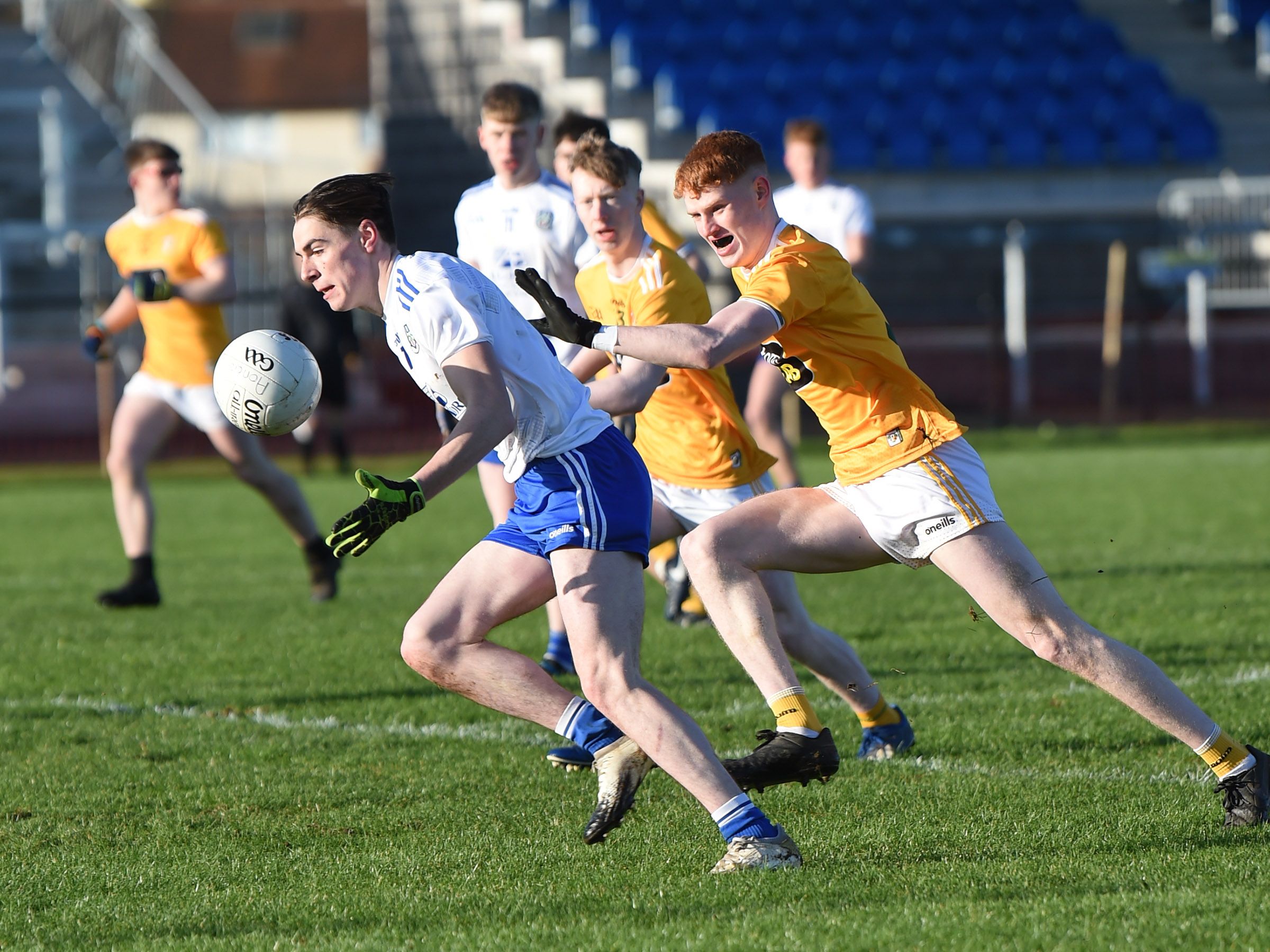 DEFENDING champions Monaghan coasted into the semi-final of the Ulster Minor Football Championship as they swept aside Antrim at a sunny and chilly Corrigan Park on Sunday.

The Farneymen were in complete command throughout this game and were full value for the win as they led throughout with a late burst of scores putting a gloss on their day's work.

Stephen Mooney top-scored with 1-8 in an excellent performance, but there were excellent shifts put in throughout the field for the visitors.

For Antrim, it was a tough afternoon, but it must be taken into consideration that they had not played together since an Ulster League game back in March.

This game was due to have been played in mid-October, one week after Monaghan overcame Cavan in the preliminary round, but restrictions on all non-elite sport meant it was put back to this weekend and the long delay Cleary didn't do the Saffrons any favours as they started slowly and found themselves chasing the game for the most part.

Despite playing into the wind in the opening half, Monaghan were quicker to settle and dominated the early possession, probing and trying to unlock the hosts' defence.

They were to hit the front on four minutes as midfielder Tiarnan O'Rourke slung over an excellent point and this was followed by the first converted free of the day from Mooney.

Antrim were making little headway in attack but did get off the mark on nine minutes thanks to Ryan McQuillan who curled over superbly from his left boot.

However, their moments going forward were few and far between as another pair of Mooney frees helped Monaghan into a 0-4 to 0-1 lead at the water break.

They took a little while to add to their tally but Dan McCahey firsted over on 26 minutes and straight after they would take a firm grip on proceedings as Michael Hamill broke through at pace and slipped to James Slevin who thumped low to the net.

This goal seemed to spark Antrim to life for the remainder of the half as Sean Duffin kicked a free and added another from play in the space of 60 seconds, but the half would end with Mooney and McQuillan swapping frees as Monaghan took a 1-6 to 0-4 lead into the half.

With the wind now at their backs, Monaghan were able to control the second period well as Mooney kicked a free on 35 minutes.

Antrim really needed a goal to ignite their challenge and had a half-chance when a long delivery was broken into the Monaghan penalty area and Callum Higgins swung his boot at the loose ball but couldn't direct it on target.

Instead, they had to be content with a pointed free from Duffin but Monaghan simply turned the screw as O'Rourke fired over an excellent score from range and Mooney got onto a loose ball from the subsequent kickout to add another. He would land once again from play to push the lead out to eight with Antrim's sole response coming from Higgins, but Mooney would respond in kind to leave it 1-11 to 0-6 going into the final quarter.

There would be no let-up from Monaghan as they put any hopes Antrim had of a late fightback to bed upon the resumption and it was that man Mooney once again the thorn in the home side as he found himself in on the right and fired low into the far corner to put his team out of sight.

Antrim could have had a couple of consolation goals late on when substitute Patrick Moyes saw his low shot cleared off the line by Eccles and then Monaghan goalkeeper Daragh Croarkin saved well from Patrick Ferris, but they would simply have put a gloss on the scoreboard.

However, they would add just two further points with both coming from Duffin frees, while Monaghan went through the gears and kicked six consecutive scores.

Substitute Cian Conlon curled over and this was followed by a Connor Eccles shoot that just cleared the bar. Corner forward Niall Rice had been off target on a couple of occasions but found his range in the closing stages with three stoppage time points and another from Michael Hamill would see them round off an excellent afternoon's work as they advanced into a semi-final meeting with Fermanagh as Antrim exited the competition.