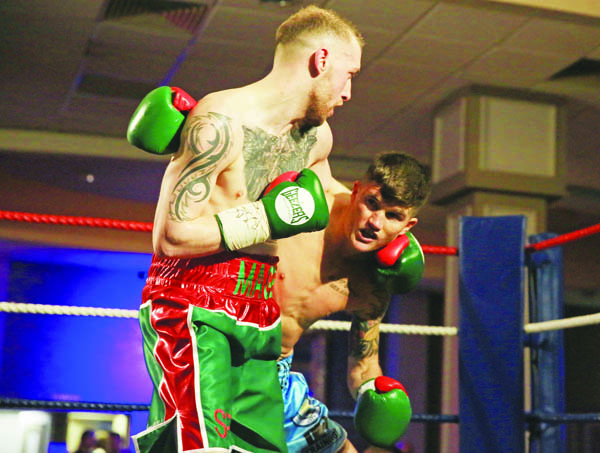 AFTER over two years out of the ring, Mark Morris returned with a four round points win over Antonio Horvatic at The Devenish on Saturday to improve to 3-1.

‘The Reaper’ had not boxed since a defeat to James Fryers back in 2015, but did not look like a man who had been inactive for so long as he jabbed his way through the four rounds to claim a 40-35 points victory.

“It’s good to be back,” said the West Belfast man.

“Two and a half years out, I’m just finding my feet again now and getting my fitness back so I’m glad of the win.

“I seemed to be comfortable and in control of the fight so I didn’t want to go out and rush it. I just used my jab and that worked well for me.”

Morris opened the contest by popping out his stiff jab that kept Horvatic at bay while some wicked hooks to the body slowed the movement of the Croatian.

The home fighter was also looking to land some powerful uppercuts and did so to great effect which resulted in a badly bloodied and suspected broken nose in the second.

A heavy shot to the body in the third sent Horvatic to the canvas for a count, but he rose from the knockdown and didn’t looked overly troubled as Morris returned to his boxing and jabbed his way through the final round to take the victory.

“I wanted to get the four rounds in there,” he explained after.

“I wanted to know what my fitness is instead of stopping him in the first round and you don’t know where you are when you come up against someone strong and good.

“Fair play to the guy, he came to fight but thank God I got the win.”

Morris was one of three boxers on the bill who are trained by Dee Walsh and Ray Ginley and the Andersonstown man says he is enjoying working for the pair and has set his sights on belts.

“I’m enjoying working with Dee and Ray,” he confirmed.

“Both of them are looking after me and they both have a different style, so you are learning both ways – defensive and attack – so it’s great to have that for every aspect of the game.

“Hopefully I’m back out in another few months and not years. Everyone’s plan is to win titles, so I just want to get the fights under my belt, make sure my hands are ok and win titles hopefully.”

MEANWHILE, Sean Higginson got his professional career off to a winning start at the Devenish on Saturday when the former St John Bosco amateur scored a 40-35 points win over Jamie Quinn.

The John Breen-trained charge looked a little over eager at times perhaps, but showed plenty of the skills and movement that contributed to a fine amateur career to score a comfortable win over Quinn.

Higginson went on the attack from the start and was loading up, hoping to make it a stoppage win on his debut, but Quinn used all of his experience to spoil although he was deducted a point in the second by referee, Eamonn Magill for persistent pushing.

In the third, Quinn went on an attack when seemingly sensing that Higginson was hurt and while he did unload a ferocious assault on the ropes, the West Belfast man returned fire and quickly retook control.

The final round saw both men happy to trade and try swing the contest their way, but Higginson was doing the better work and took a deserved victory.

It was also due to be a debut for his stablemate, Sean Magee who had to settle for a four round exhibition against Lee Clayton with his initial opponent, Aleksandrs Birkenbergs unable to travel.

Another member of the Breen team, Feargal McCrory topped the bill on the night and delivered yet another impressive performance in front of the packed hall when taking the PBA International Challenge Belt with a fourth round stoppage win over Jay Carney.

The Coalisland man wasted no time in getting to work, tearing into the Englishman from the opening bell and seemed to have him in trouble on several occasions before finally overwhelming him in the fourth with referee, John Lowey correctly stepping in as McCrory improves to 5-0.

Another man who enjoyed great backing on the night was debutant, Sean McGlinchey whose huge support from Derry roared him to a points victory against Josef Obeslo (40-36), while it was an identical outcome for Dundee’s Ronnie Clark who opened the night against Imre Nagy with a victory.