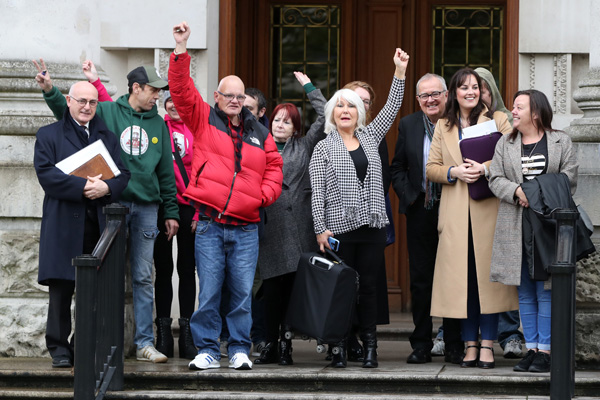 MPs have passed long overdue legislation to provide compensation to victims of historical institutional abuse.
The bill was fast-tracked through the House of Commons on Tuesday and it will now receive Royal Assent to become law.
There have been calls for compensation since the Historical Institutional Abuse (HIA) Inquiry ended in 2017.
On Monday, the Court of Appeal ruled that the Executive Office has the power to bring forward a compensation scheme for victims of historical institutional abuse.
Speaking in the Commons, Northern Ireland Secretary Julian Smith said the bill was the “first of its kind” in the UK.
He paid tribute to those survivors, but also said it was "a tragedy" that more than 30 victims had died since the inquiry first published its findings.
Mr Smith also said the cross-party support in Parliament for passing the bill was testament to the strength of feeling about the issue.
Margaret McGuckin, from the group Survivors and Victims of Institutional Abuse (SAVIA), said she was delighted with the result, but it had taken a long time.
"It was constant lobbying, pleading and begging," she said.
"I have to commend Julian Smith, who is just a wonderful gentleman and if he had been in that position many years ago I feel he would have got this through.
"We refused to take 'no' for an answer. We refused to let them say 'yes, it'll be done after the election'."
"When I see this Royal Assent come through today, then I'm going to know we got what we set out to get - justice for victims and survivors of historical institutional abuse, " he said.
Alliance MLA Paula Bradshaw added: “It is important first of all to congratulate those who have led the campaign to reach this important milestone. Without them, the victims would not be getting this long overdue recognition.
“It is of course a hugely welcome relief this Bill has passed through Parliament before the election. The last thing the victims needed was to become victims again of political deadlock, after all they have been through already.
“Needless to say, this has come too late for many victims, and it is vital now implementation proceeds swiftly so it is not too late for others. This is a significant day for the campaign but the redress is still to come and the work must continue to ensure victims get the recognition they deserve.”