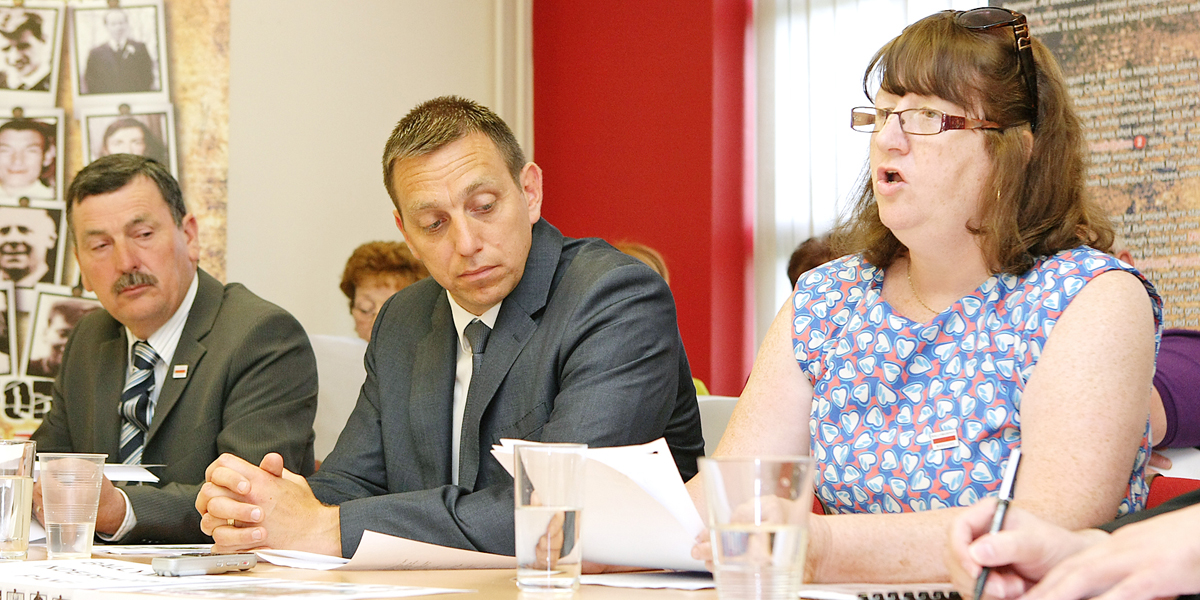 THE families of those killed in the Ballymurphy Massacre have proposed the appointment of an independent panel to examine all documents relating to the 1971 slaughter.

Eleven people were murdered by the British Army’s notorious Parachute Regiment in the West Belfast estate in a 36-hour period in August in 1971. For decades the families of those killed have campaigned for truth and justice, but so far to no avail.

At a press conference yesterday the families’ lawyer, Pádraig Ó Muirigh, explained the proposal and what the families hoped to achieve by it.

“The Ballymurphy families propose the appointment of an independent panel to examine all documents relating to the context, circumstances and aftermath of the deaths of their loved ones,” he said.  “Its focus would include the investigation of the role of the British Government, British Army, criminal justice agencies such as the RUC, DPP, the Coroner’s Office and the significance of the media.

“Reflecting the terms of reference of the British Government-funded work of the Hillsborough Independent Panel, the proposed project’s research and analysis would demonstrate how disclosure of all documents ‘add to public understanding’ of the circumstances in which the deaths occurred. It would also create a public archive of all documents reviewed by an independent panel. Finally, it would establish an evidence base on which further legal actions and new inquests could be progressed.”

A number of leading human rights figures, including Nuala O’Loan, Professor Phil Scraton from QUB and lawyer Gareth Peirce, have already agreed to sit on the panel. John Teggart, who lost his father in the massacre, said the “cost-effective” proposal could establish the truth and put on record that those killed were not gunmen or gunwomen but innocent civilians.  Briege Voyle, whose mother was killed, said the proposed model would work and, in light of the recent news about the Historical Enquiries Team’s failures, the proposal should be given a chance.

SDLP MLA Alex Attwood, who was also at the press conference, said the Ballymurphy campaign is gathering increasing levels of support at Stormont.

“The families have shown such resilience and dignity and remain clear-headed about what they want,” he said. “We stand with them in that journey and we say everyone should occupy that ground,” he said.

“The British Government should meet with the families and acknowledge this is a model that has worked and the evident weaknesses of other mechanisms backs this as an innovative and credible way of trying to get the truth.

“There is growing support for this campaign at Stormont. Trevor Lunn of the Alliance Party and others from a unionist background have met with the families and support their campaign and I would like to see an all-party motion at the Assembly endorsing this approach we have heard about today.”

After listening to the families and their legal team yesterday, Sinn Fein MLA  Pat Sheehan said the proposed model has the potential to bring the families’ long and emotionally and physically gruelling journey to a close.

“The difficulties with the HET, highlighted by last week’s HMIC report, reinforce the families’ position,” he said.  “This new model has been tried and tested and it can work.  It’s possible the British will use cost as an excuse to reject it, but the families have done costings and it would cost less than the Hillsborough panel which came in at £500,000.

“When you compare that to the running of the HET at £6m a year, it’s a drop in the ocean.  The people who have agreed to be on this panel have been recognised for their immense integrity and independence and I can see no reason why it shouldn’t be established.”