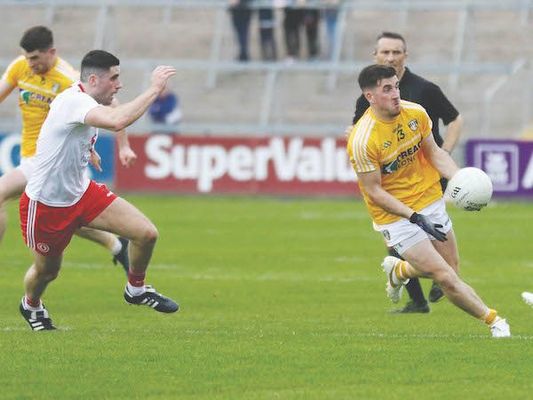 AS one of the world’s busiest tourist destinations, Dubai is forever adding to its mind-boggling architecture and must-see attractions.

A mecca for shoppers and sun-worshippers, the most populous city in the United Arab Emirates also boosts some of the finest sports facilities in the world, Meydan Racecourse and Emirates Golf Club among them.

Yet, on the afternoon of Sunday, January 5, 2020, Ryan Murray wasn’t interested in visiting the Burj Khalifa, currently the world’s tallest building, Palm Islands or the Dubai Frame.

Instead, Murray was scrolling through Twitter on his iPhone 11, desperately searching for updates from Antrim’s Dr McKenna Cup opener against Fermanagh in Ahoghill.

It was the first time he’d missed Gaelic Games since leaving for Dubai last October soon after his Lámh Dhearg side lost the county final replay to Cargin.

His girlfriend Niamh had already travelled out, but the replay meant Murray had to wait a week longer before joining her.

In truth he was glad to get away from football for a while after a gruelling Championship run which also included a hat-trick of games against Portglenone in the semi-final. His body needed it and so did his mind.

Yet, that afternoon, as he learned of Antrim’s dramatic 2-8 to 0-13 win over the Ernemen courtesy of a late Paddy McBride goal, he realised how much he missed the GAA.

“It was a tough call to miss out playing for Antrim this year. Now that it has been cut short, it is something I’d like to do again,” said Murray.

“I did get a taste for not being accountable for most of the days of the week, not having to go to training.

“When Antrim were playing Fermanagh in the McKenna Cup at the start of the year, I was sitting out in Dubai, scrolling through Twitter for updates. I was thinking I’d still love to be playing.

“It was a weird one, but I suppose it was to do with the fact that my brother (Conor) is playing and my mum and dad would still go to every game. I grew up playing county minor and U21 with the likes of Paddy McBride and Niall Delargy and those boys, plus you have club mates on the teams.

“I played a bit for Dubai Celts and it was good to get back playing again. You can never really leave the GAA.

“I messaged Lenny (Harbinson) a while back, just to touch base and I’ll get a chat with him in the coming weeks just to see what the plans are.

He added: “Sometimes you are being pulled in different directions and you feel like you don’t always have the time to give to the club so it is nice that it is separated out this season.

“County isn’t due to start until the end of September and it will be nice to have the sole focus of playing for the club for the next while.

“I can’t remember the last time I had that because I went from being a county minor to playing county U21 then into the senior panel for the last six or seven years.

“It will be good to have that again, but at the same time, I’m keen to get back involved with Antrim.”

Boost
Murray’s return would be a welcome boost for Harbinson’s side, who will get their chance to play for promotion in October when the final two round of the Allianz Football Leagues are played.

The Saffrons will be assured a top-two place should they defeat Wicklow (away) and Waterford (home) while they await the winners of the preliminary round clash between Cavan and Monaghan in the Ulster Senior Football Championship.

Had the Covid-19 pandemic not struck, Murray’s only visit to Ireland would have been a brief one during the summer months to escape the extreme heat of the Middle East.

He didn’t plan to don the Saffron jersey of Antrim at all in 2020. Like so many others living abroad, Murray had to dramatically change his outlook back in March when it became clear the UAE would enforce a strict lockdown.

“I came back at the end of March - we had planned to stay out until at least July, around this time, or maybe even commit to stay for another year,” said Murray.

“Then, as the whole Covid-19 situation began to unfold, myself and my girlfriend Niamh decided it would be best to come back to Ireland before they started shutting down borders and stuff.

“We are glad we managed to get back because things became very strict in lockdown over in Dubai.

“We always wanted to come back during the summer for a time because over there the temperatures are over 40 degrees. Being stuck in an apartment for a couple of weeks during lockdown would have been tough and we wanted to see our families.

“The company I work for, Arup, allowed me to work remotely when I came back and then I switched to our Belfast office.

“Niamh works as a teacher and she was able to do her lessons online.”

The pair haven’t made any commitments to return to Dubai just yet and are waiting to see how things return to some form of normality as restrictions begin to lift, at least in some parts of the world.

“We haven’t really spoken much about going back,” added Murray.

“The way things are at the minute, it probably doesn’t make much sense to make any firm decisions on it.

“The plan is remain in Ireland for the remainder of the year anyway and then see how things are. Depending on work, it is something I would like to do again because we’ve spent a lot of time and effort in trying to get set-up out there.”

His lifestyle in Dubai afforded Murray the time to concentrate on his other big sporting passion – golf.

He joined a local golf society and rediscovered his love for the game having played off a handicap of two back when he was a teenager.

“I used to play golf all the time when I was younger – I played off two when I was 15 and played in provincial competitions.

“Back then, you could play 18 holes during the day and play an U16 football game that evening no problem.

“With club and county commitments, you don’t get out as much. It is just hard to find the time. I was still a member of Dunmurry Golf Club last year, but I’m probably as obsessed with golf as I am with the GAA.”