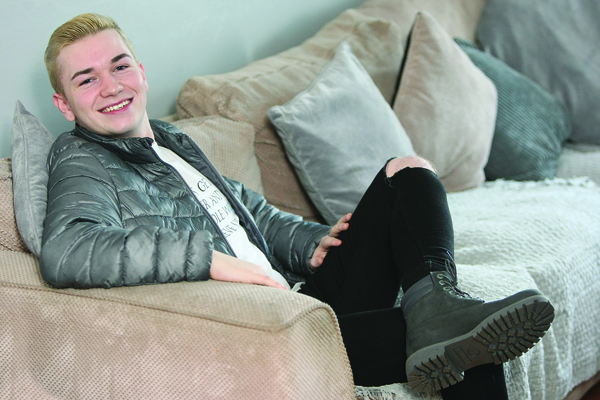 ON THE ROAD TO RECOVERY: Jack Brennan speaking to the Andersonstown News yesterday

Twenty-year-old Jack Brennan says this is the first Christmas since he was 13 that his mum “won’t have to worry about me”.

When the Andersonstown News last spoke to the young Glen Road man back in May, he had been kicked out of rehab in England after only eleven days, and in a moving cry for help he told us that he wanted nothing more than to beat the drug addiction that he had been battling since he was a schoolboy. Since our report Jack has successfully completed a stint in rehab and has rebuilt relation-ships with his parents.

He says his life slowly began to turn around after the article appeared in the Andersonstown News.

The Andersonstown News sat down with Jack yesterday to hear about his inspiring story and to find out how he would be spending his first sober Christmas in seven years.

“After I last spoke with the Andersonstown News the rehab facility must have heard about it and got in touch with my mummy and offered me another place,” he said.

“At that time my drug taking had got even worse, my poor mummy ended up finding me unconscious on the bathroom floor of my flat. She had to call the police and an ambulance – they had to put the front door in to get me.

“The ambulance crew told her to find out what tablets I’d taken incase they needed it for the coroner. Imagine what my mummy was going through because of my actions, I’m devastated now at the hurt I have caused her.”

Jack says that this was the turning point and it was at this time that he decided he needed to change his life once and for all.

“I rang all my family and asked them to meet me. I apologised for everything I’d put them through and told them that I needed to get into rehab. I knew if I kept going the way I was going I would end up dead, I was making my mummy and granny sick with worry.”

Two days later Jack had booked his flight and took a taxi by himself to the airport. He was admitted into a rehab facility in Runcorn in the north of England.

“The routine and structure I was given in rehab was amazing, I didn’t realise that that’s what I was missing in my life. It took me about a week to come round, my detox lasted ten days and I went on to complete the 28 day programme.”

At the end of the 28 days Jack graduated from rehab and he says it was a very emotional experience.

“My parents and my sister came over for my graduation, I hadn’t spoken to my daddy in two years. It meant so much to me that he came over for this important moment in my life.

“My daddy rings me every day now and asks me how I am, what I’m doing and if I need anything. It just makes me so happy to have my daddy back. My mummy says she has her wee boy back now. She says I was a stranger for years, and she now thinks I’m the best thing since sliced bread.”

Jack attends Alcoholics Anonymous and Narcotics Anonymous meetings every day, he volunteers in a soup kitchen at the weekends and has started a course in Belfast Met. He is now looking forward to Christmas for the first time in years.

“My mummy rang me last night and she was in a blind panic about Christmas, she was panicking about a turkey and the dinner and I just sat there listening to her with a big smile on my face.

“I thought to myself, ‘This is amazing, my mummy now has normal every day worries, she’s worrying about cooking a turkey instead of worrying about finding me dead.’

“I’m not naïve, I know there will always be temptation and I will always have cravings. If that happens I pick up the phone and ring someone from AA or NA and they help me. But for now I can honestly say hand on heart that I’m high on life and it’s the best feeling in the world.”