Neil's being put through his paces for Mencap 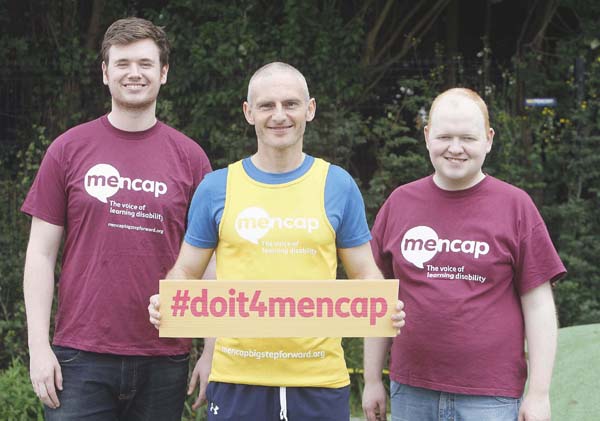 A North Belfast fireman who runs marathons for charity is urging local people to follow his lead and lace up their running shoes.

Neil Mercer completed the Belfast City Marathon in May and is currently in training for the upcoming Belfast City Half Marathon.

The Ballygomartin man works at Belfast City Airport and each time he takes on a running challenge he fundraises for learning disability charity Mencap.

Neil said he had a number of challenges in the pipeline.

“I was delighted to complete the full Deep RiverRock Belfast City Marathon in May, and I’m proud to say that my time of 3 hours and 12 minutes qualified me for the London Marathon, coming up in March,” Neil said. “But my focus for now is getting ready for the half marathon and it’s going well.”

Mencap, which supports children and young people with a learning disability and their families, is the official charity of the Belfast City Marathon and the Half Marathon until 2018. Since the announcement of the charity’s partnership with the event for three years, Neil has taken a special interest in the organisation and he has shown his support through running.

“For me, running allows me to combine some of my key passions,” Neil said. “First and foremost, it’s a great way to raise money for a worthy cause and, in my opinion, there is none better than Mencap. The charity plays a crucial role in the community, supporting children with a learning disability and their families. I recently witnessed Mencap’s work when I visited the new Mencap Children’s Centre. Simply put, without Mencap’s support many of these children would not be able to reach their full potential. It’s great to know that putting myself to the test like this can make a real difference in their lives.”

And Neil’s charity endeavours give him an added benefit as his job is a demanding one.

“Keeping fit is important for my work and running has helped a lot with this. It’s relatively low cost and you get to meet all sorts of people, especially at a big race day event like the half marathon coming up. It’s fantastic to come together with other like-minded runners to achieve something great.”

For anyone considering lacing up their trainers and taking on a long-distance race like a marathon, Neil says runners shouldn’t be intimidated by the task. “A distance event like the half marathon can be daunting to many people, but actually it can be a great starting point. I think preparation is key. If you plan out your training and keep up the regime you’ll find it much easier on the day.

“I urge anyone who is considering signing up for the half marathon to do it. I’ve learned so much about the charity since the full marathon earlier this year and I can tell all runners that any money they raise for Mencap will go towards truly deserving children and their families.”

“We are very excited to be the official partner of the 2016 Deep RiverRock Belfast City Half Marathon and extremely grateful to runners like Neil for taking part on behalf of Mencap,” she said. “Without our supporters we would not be able to provide important services, such as our new family support programme that will help parents navigate raising a child with a learning disability. We’re very much looking forward to the big event – we’ll be there cheering for Neil and all the Mencap runners at the finish line.”

The Deep RiverRock Belfast City Half Marathon is happening on Sunday, September 18 and the deadline to enter is Friday September 2. To sign up, visit mencapbigstepforward.org