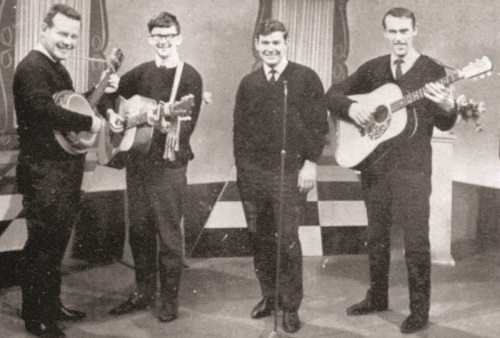 TOP OF THE POPS: The Go Lucky Four, who recorded ‘Up Went Nelson’ and reached No.1 in the Northern Ireland hit parade

I’m quite sure that Belfast-based teacher Finbar Carolan and his colleagues John Sullivan, Eamon McGirr and Gerry Burns never heard of Seamus Sutcliffe or Francis Johnston. Yet they all had a connection to one of the momentous events in Ireland in the twentieth century.

Nelson’s Pillar had stood in Sackville Street, later O’Connell Street, since 1808. The pillar was 120 feet tall and the actual statue 13 feet high. For the sum of sixpence you could climb the 168 steps to the top and have an unrivalled view of Dublin city.

Shortly after 1.30am on August 8, 1966, taxi man Stephen Maugham stopped at the traffic lights in O’Connell Street at Nelson’s Pillar. He moved off as the lights turned green. Hearing a loud bang he saw rocks hurtling towards his car and he accelerated sharply. The taxi was wrecked but miraculously he was uninjured. Shop windows in nearby North Earl Street and Henry Street were broken but the damage was surprisingly slight given the size of the blast. About two-thirds of the pillar was blown away and what remained was christened ‘the stump’ by the witty Dubliners.

Special guards were placed on the Wellington Monument in Phoenix Park and the British war memorial in Islandbridge. Predictably the action was quickly condemned. The Minister for Justice, Brian Lenihan branded it as “reckless” and “an outrage”. “It was planned and committed without any regard for the lives of citizens, and it was providential that nobody had been killed or injured,” he said. “The wanton damage to property in the immediate vincinity, and the disruption of traffic had inconvenienced thousands of Dubliners.”

Alderman Eugene Timmons, Lord Mayor of Dublin, said that he had been advocating the removal of the statue for fifteen or twenty years but that he “never thought it would disappear in such a manner.” The Irish Republican Publicity Bureau issued a statement “to make it known that the Republican Movement “had no connection with the demolition.” Eight men were arrested but later released without charge. It was rumoured that Éamonn de Valera sent a telegram to the editor of the Irish Press, owned by his family, suggesting the headline, ‘British Admiral Leaves Dublin By Air’.

On the Monday night after the explosion, Gardaí directed that all dances in O’Connell Street close by 11.30pm and all other business premises vacated. Preparations were made by the Irish army to complete the demolition. Earlier large crowds had turned up for one last view of the Stump. The massive controlled explosion was cheered by a crowd of thousands and when it became apparent that this had caused a lot more damage than the first effort it was suggested that they should have brought back the experts to finish the job.

The initial bombing of the pillar was the headline for every news bulletin throughout Ireland on Wednesday morning as reports of the action were relayed. It was the chief topic of conversation in all workplaces. The staff room of St Thomas’s Secondary School on Whiterock Road was no exception. Four young teachers listened as other members of staff related the details. Instinctively they knew that this was one of those extraordinary days begging the question, ‘Where were you when you heard the news about Nelson’s Pillar?’

The four were musicians who had performed on stage at the school concert the previous Christmas. They brought the house down and shortly afterwards they began playing gigs in pubs and clubs around Belfast and were known as the Go Lucky Four. They met again at lunchtime that day and it was decided that they should write a song about the event and have it recorded ASAP. I remember being told that their manager, Gerry Crean, spoke to sound technician and record producer Cel Fay about it and he urged them to keep it simple and to use a known melody. He suggested ‘God Save Ireland’ or something of that nature with a militaristic beat. I’m told that Up Went Nelson was penned by Derry man Finbar Carolan.

By the time the Irish army had completed the task of removing the Stump (dubbed Operation Humpty Dumpty) the Go Lucky Four had recorded in Billy McBurney’s studio their version of the event, ‘Up Went Nelson’ including the lines ‘They thought Horatio Nelson had overstayed a mite/So they helped him on his way with some sticks of gelignite.’

The song went straight to the top of the Irish hit parade and stayed there for eight consecutive weeks. Neither BBC nor Radio Éireann played the disc but the pirate station Radio Caroline aired it and in no time everybody knew the words and it was being sung the length and breadth of Ireland. Eamon McGirr, Finbar Carolan, John Sullivan and Gerry Burns were catapulted to stardom.

They eventually resigned their posts at St Thomas’s and relocated to Manchester where they were in great demand. They took up teaching posts there and for a number of years they continued with great success before disbanding as the era of folk groups came to an end.