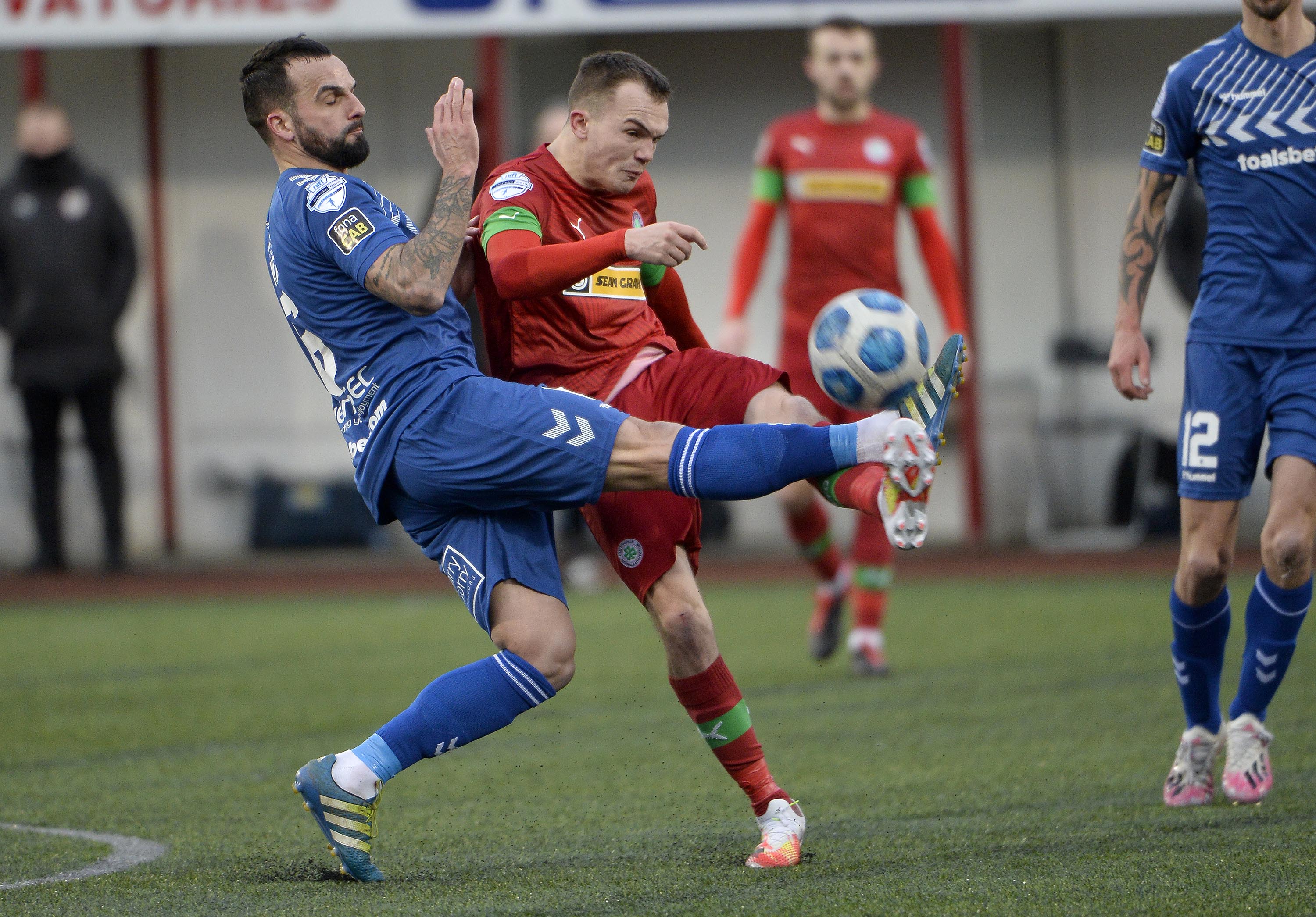 DEADLINE day signing Paul O’Neill made an instant impact for Cliftonville as he claimed an assist and bagged a late equaliser to salvage a share of the spoils in a 2-2 draw with Coleraine on the north coast on Tuesday evening.

Rory Hale lobbed Gareth Deane to give Cliftonville the early lead but Aaron Traynor hit back for the Bannsiders who turned the game around before the break with a goal from James McLaughlin.

Coleraine looked to have done enough to hold out until O’Neill scrambled home an equaliser with little under five minutes remaining and in a frenzied finish, struck the post with Ian Parkhill hitting the crossbar at the other end.

Cliftonville manager Paddy McLaughlin made a host of changes from the weekend's 1-1 draw with Glenavon.

Cliftonville made the perfect start at the Showgrounds inside of four minutes as Aaron McCarey’s defensive clearance was flicked on in the air by Paul O’Neill and Rory Hale lobbed the ball over Gareth Deane to make it 1-0 to score his second goal of the season.

The midfielder attempted the catch the Bannsiders' shot-stopper out at his near post after 10 minutes but this time Deane was equal to the effort.

Coleraine were back on level terms after 20 minutes as Gareth McConaghie’s free-kick was parried by McCarey and on his 100th appearance for the club, Aaron Traynor pounced on the loose ball and levelled.

A deep cross from Lyndon Kane was gathered by McCarey but just before the break, the Bannsiders hit the front.

Jamie Glackin slipped the ball to Ian Parkhill whose cross was swept home by James McLaughlin to make it 2-1 at the interval.

Cliftonville started the second-half on the front foot as Lyndon Kane conceded possession and afforded Paul O’Neill an opportunity, but the striker shot wide of the target.

On-loan Celtic midfielder Barry Coffey then sent in a deep cross which Gareth McConaghie intercepted in time at the expense of a corner.

Stewart Nixon shot just over the bar at the other end and James McLaughlin was inches away from heading home a Jame Glackin free-kick.

Glackin curled an effort wide of the target as Coleraine looked to extend their lead.

Cliftonville had plenty of second-half possession but found it hard to penetrate a stubborn home defence until the 86th minute as the visitors hit back.

Subsitute Daire O’Connor looked to have won a corner off Aaron Traynor but the ball stayed in play and O’Connor was quickest to react, side-steeping the challenge of McConaghie and crossing for O’Neill to bundle home and make it 2-2.

The pendulum swung in the Reds' direction and they almost regained the lead through Aaron Donnelly whose effort was cleared off the line by Evan Tweed with Paul O’Neill striking the post from the rebound.

Coleraine themselves almost stole victory through Ian Parkhill whose driven shot crashed off the crossbar but in the end the sides shared the spoils after a dramatic ending.