SQUINTER: New jobs for the Brexit boys (and girls) 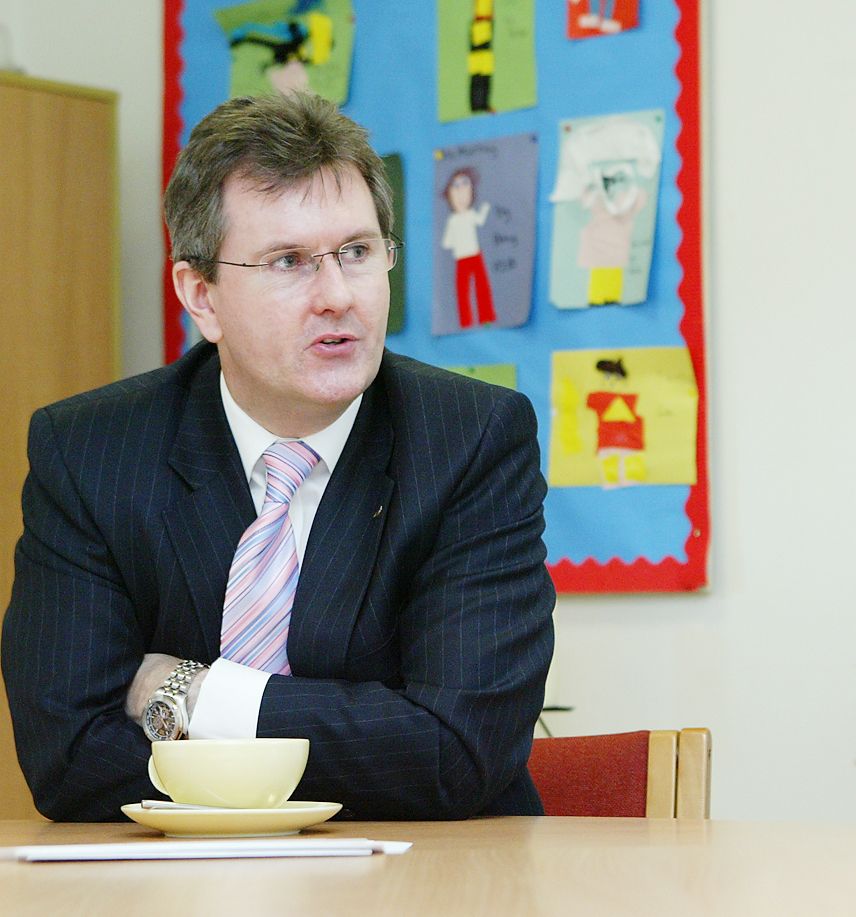 BRITISH Trade Secretary Liz Truss has appointed ten new trade envoys as the UK continues to reap the benefits of Brexit. No.10 may be considering giving emergency visas to 10,000 truck drivers from the EU in order to fill some of the gaps in the supermarket shelves, but when Liz is nailing deals trade deals with the likes of Trinidad and Tobago and Upper Volta on an almost six-monthly basis, scaldy shelves in Lidl and Sainsbury’s pale into  insignificance.

The most high-profile figure to be handed one of the posts is Lord Beefy Botham, ennobled by Boris Johnson for cheating on his missus and backing Brexit. Oh, and because he played a bit of cricket. Beefy has been handed the task of selling pork pies and Watney’s Red Barrel to the Aussies, although what expertise he has in the field of sales is not entirely clear at present. And if he’s got the gig because of his profile and his likeability then his bitter and long-running feud with Aussie cricket hero Greg Chappell – which has turned to fisticuffs at times – then you’d have to say that Beefy is not likely to shift many frozen Yorkshire puddings in Kookaburra Creek.

But it’s two appointments of local interest that piqued Squinter’s interest. Baroness Hoey of  Royal Ulsterland is the new trade envoy for Ghana, which annually takes about £50m of British textiles and some £40m of machinery and parts. What Kate’s going to bring to the table when it comes to thread and generators is anybody’s guess. While she does have a rather large and natty collection of scarves, Squinter can’t say he’s ever seen her on a machinery stand at the Balmoral Show.

Becoming a grid girl for JCB represents something of a closing of the political circle for the Baroness, who started her political journey in the 70s as a member of the pro-united Ireland International Marxist Group.  She’s gone from rubbing shoulders with Labour firebrands to sitting beside wee Jamie Bryson and Jim Allister on the back of a union-jack-draped lorry in Newtownards spouting dire warnings about the Protocol to a half-empty town square.

Squinter’s been dusting up on his Ghana knowledge, and because Kate’s been so busy doing photoshoots with Nigel Farage and getting measured for her ermine cloak, he’s sent her the following list of things she should probably know before she jumps on a plane to Accra with a briefcase full of textile swatches and piston heads. Doubtless she already knows and is buoyed by the fact that Ghana has Africa’s largest Orange Order membership, so she’s got plenty of opportunities to offload a few containers of white gloves, sashes and bowlers.

As wee Jamie also likes to be known by this name, Kate may want to consider calling him something else next time she’s in Newtownards. Or Carrick.
• As it’s virtually on the Equator, Ghana is one of Africa’s hottest countries.
Shouldn’t be much of a problem for the baroness, as she probably felt worse heat at the meeting in Vauxhall at which she was deselected as the local MP.
• The red in Ghana’s flag represents the blood spilt in the fight for independence.
Awkwardly, the blood was spilt by the Brits, but if Kate gets an Irish passport she’ll probably be made welcome.
• Lake Volta is the largest man-made lake on Earth and is visible from space.
Mentioning that Lough Neagh is the biggest freshwater lake in the occupied six counties is likely to be a handy ice-breaker.
• Ghana is Africa’s largest producer of gold.

Kate should be aware that accepting payment for goods in gold bars is not recommended as she will likely go over her easyJet luggage allowance.

And then we turn to Sir Jeffrey of Donaldson Manor, who has been appointed trade envoy to Cameroon. Jeff is already the Prime Minister’s trade envoy to Egypt, although the fact that nobody knew this may suggest that any deals he may have struck in Cairo have not exactly been headline-grabbers. Top British exports to Cameroon are machinery and beverages and again it falls to Squinter to point out that the Lagan Valley MP and new DUP leader has not displayed any particular interest in either field, although he may of course have a rich  hinterland of tractor and and Carling lager expertise which none of us knows about.

So what what should Sir Jeff know about Cameroon before he applies for his visa to get on a plane to Yaoundé?
• Cameroon is one of the wettest on Earth.
Having been born in Kilkeel and being MP for Lisburn, the boy Donaldson doubtless has a good collection of union jack umbrellas.
• British Cameroon gained its independence in 1961.
This makes Ghana and Sir Jeff the same age, although only one retains its boyish good looks and lively sense of humour.
• Cameroon has the longest-serving non-royal head of state in the world.
Paul Biya (88) has been President since 1982 and is an authoritarian and devout Christian. This could be the start of a beautiful friendship...
• Cameroon has a huge amount of thermal springs.
The volcanic gas powers 20 per cent of Cameroon’s energy needs. (No jokes about young earthers and DUP conference gas: Editor.)
• There are 230 spoken languages in Cameroon.
French is by far the most widely-spoken language in Cameroon. English is also common, but Ulster Scots isnae.


HERE’S the front door of The Range on Boucher Road last Thursday evening, August 19, over 40 days shy of Halloween. Frightening, isn’t it? And not in a fun, spooky way.

Funny thing was, there were people all over the shop and in the till queues with baskets and trolleys full of this stuff. Kind of understandable, you have to suppose. It’s been another hard pandemic year and if people are looking forward a bit more than usual to festive occasions, then what of it? And if you think Halloween has come early this year, wait till you hear what Brexit has done to Christmas.

The British Poultry Council has warned that widespread staff shortages caused by the fleeing of EU workers from the UK in the wake of Brexit. This is a key time for turkey producers as birds are slaughtered at around four months of age for reasons of tenderness, taste –and profit. So birds are normally hatched in late August to be ready for the chop and ready for the Christmas table.

Paul Kelly, the managing director of free-range turkey company KellyBronze, told The Guardian: “There will be a massive shortage because companies cannot risk hatching turkeys and pushing them on the farm if they can’t get the workers to do the job. It would be financial suicide. Turkey after Christmas Day is worth nothing.”

You are free, dear reader to insert your own Brexit joke here about turkeys, voting, Christmas etcetera.

Not to worry, there’s always a nice piece of beef, or lamb, or pork if the gobbling of young turkeys is missing from British farms this year, isn’t there?

The Association of Independent Meat Suppliers revealed this week that they have 14,000 positions they can’t fill because of a lack of EU workers. Spokesman Tony Goodger said his body would be contacting members to direct them to the Prison Service with a view to securing the services of prisoners or day-release prisoners.

“It's down to the members,” he said. “They [prisons] have got offenders and prison-leavers, we have got members who need labour. It seems sensible to bring the two together.”

Well, Squinter doesn’t know about you, but he certainly didn’t envision one of our Brucie Brexit Bonuses to be the placing of meat cleavers and butchers’ knives in the hands of convicted criminals in the run-up to Christmas.

The supermarket Christmas song lists should be good this year as you go about your Christmas chopping. Sorry, shopping. Last Christmas I Gave You My Heart (And Lungs and Liver)? Silent Knife? I’m Screaming of a White Christmas? Yes, you’re right. That’s quite enough of that.

And Turkeys aren’t the only thing that may be missing from your Christmas shopping trolley this year. Trade publication the Retail Gazette has advised the public to buy presents early as soaring freight costs are leading to widespread uncertainty among retailers. Shipping a container full of goods – from China, the USA, Europe, wherever – to Britain is likely to be four times more expensive than it was this time last year, according to toy giant Hasbro.
Barbie manufacturer Mattel has put customers on a price increase warning, saying spiralling freight costs are going to have to be passed on.

Fills you full of the joys of the season, doesn’t it?

HMMMM. Squinter’s never tasted Guinness in his life, much less drunk a pint of it. And he’s pretty sure that most of the countless black stuff aficionadoes out there have never drunk two pints at the one time.

This picture almost ended the ceasefire at the weekend when Squinter showed it to his pals and put it up online, as lovers of the drink are extremely particular about how it’s presented: the glass, the Guinness/head ratio. It was taken in the Lagan Bar at Belfast International Airport and it’s two pints of Guinness in one of those German beer festival steins.

Don’t worry, the customer – a friend of Squinter’s – asked for two pints and he asked for them in a stein, just because he could and just because they would. This being Aldergrove, it cost him twelve quid. Of course it did.

Squinter’s first question is, how do you get your face past that monstrous head to get at the stout? There must be four inches of it. Pull your head back after giving that a bash and you’d likely end up looking like Santa Claus.

Squinter’s chum reports that it was actually a pretty good pint, or two, even if, as someone pointed out, it had a head like Harry Maguire.