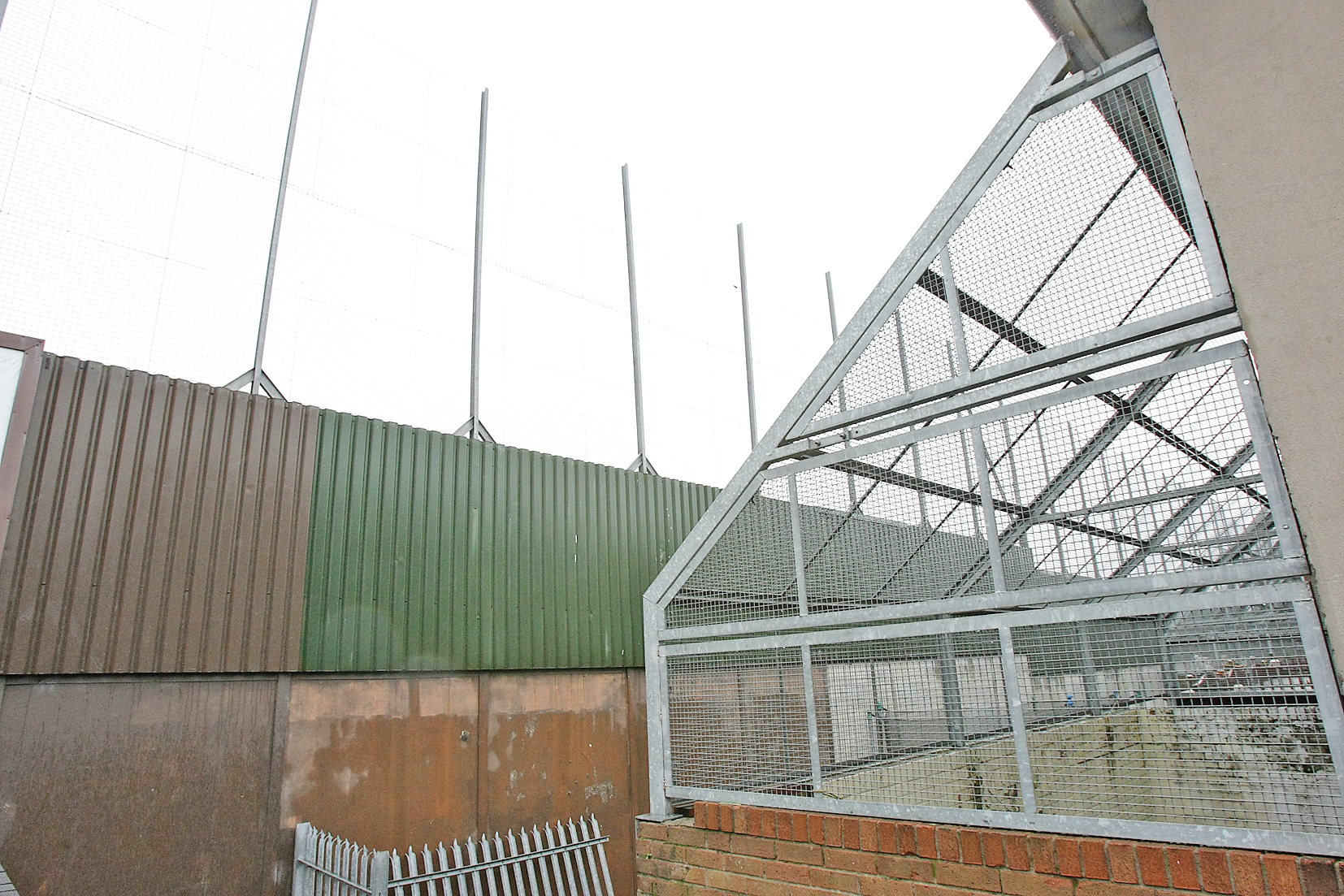 A NEW book to be released this summer will address the thorny topic of the ‘peace walls’ which still mark Belfast’s urban landscape in the wake of the Troubles.

In ‘Belfast: Toward a City without Walls’ New York-based English journalist Vicky Cosstick tells the story of the one hundred walls, gates, barriers and other interfaces, one third of them built since the 1998 Belfast Agreement, which continue to divide Catholic from Protestant areas of the city.

The book is set within a broad historical context and is based on research with hundreds of interviewees including community workers, residents, artists and architects and former paramilitaries, as well as church and business leaders. It includes a foreword by John Paul Lederach, Professor of International Peacebuilding at the University of Notre Dame, who has been a frequent contributor to the peace process debate.

Alongside the text are 40 panoramic black and white photographs taken by Short Strand photographer Frankie Quinn, who has chronicled the peace walls of his native city for more than 20 years.

Vicky says that the inspiration for the book came from the promise made in May 2013 by First Minister Peter Robinson and deputy First Minister Martin McGuinness to bring down Belfast’s peace walls by 2023. She sought to address the feasibility of the proposal and how it might come about by speaking to those on the front lines of peace building efforts.

“In many ways the walls are a neglected feature of Belfast’s contemporary reality,” Vicky told the Andersonstown News.

“As the attention has moved from the north of Ireland in the wake of the conflict, there is a tendency to ignore that beneath the surface of the new Belfast there remain these stark physical barriers between communities.

“While the physical barriers are visually striking they are just one symptom of the wider problems in these working class communities: drug and mental health problems, unemployment, social deprivation. I wanted to address both the hope for change and peace that exists in Belfast as well as the difficulties in achieving it.”

“Despite being an outsider I found that generally people were happy to talk on what could be seen as a sensitive subject.

“Many of those living near to interface areas are sick of endless surveys they receive in the post, but are enthusiastic to tell their stories face to face about how the complex way they relate to the walls.”

Vicky adds that one aspect of Belfast’s peace walls often overlooked in conventional approaches is that the responsibility for their erection lies not with locals but with the British army.

“Although there was an obvious security need for the peace walls during the 1970s, when most of them were initially constructed, I don’t think enough thought was given to the long term impact they would have on communities.

“In my research as a journalist and in the field of development work, what I have encountered repeatedly is that when barriers such as Belfast’s peace walls go up, they are almost always erected by an outside power, whether that is a colonial state or some other outside force.

“There is still a responsibility on all the relevant governments to address the peace walls, they can’t be placed solely on the backs of the communities.”

As regards the likelihood of the walls coming down in time for the Executive’s target of 2023, Vicky believes that while the security of residents must come first, tangible improvements can be implemented on a smaller scale, which she hopes might lead to a sea-change in community relations.

“I’m a believer in a tipping point, where small quantitative change can really make a breakthrough, and I think that’s what we can learn from other divided cities,” she said.

“Improvements like increasing visibility across peace lines is an important first step.

“Some of the work that has been done on the Shankill-Falls peace line and in North Belfast illustrate how installing new gates and see-through materials can build up mutual trust.

“If these steps are undertaken they would offer a small but tangible experience of progress without risking the peace of mind of the interface residents.”

‘Belfast: Toward a City without Walls’ will launch in New York on June 3. The Belfast book launch takes place Thursday, June 11, 6pm, at the Red Barn Gallery.