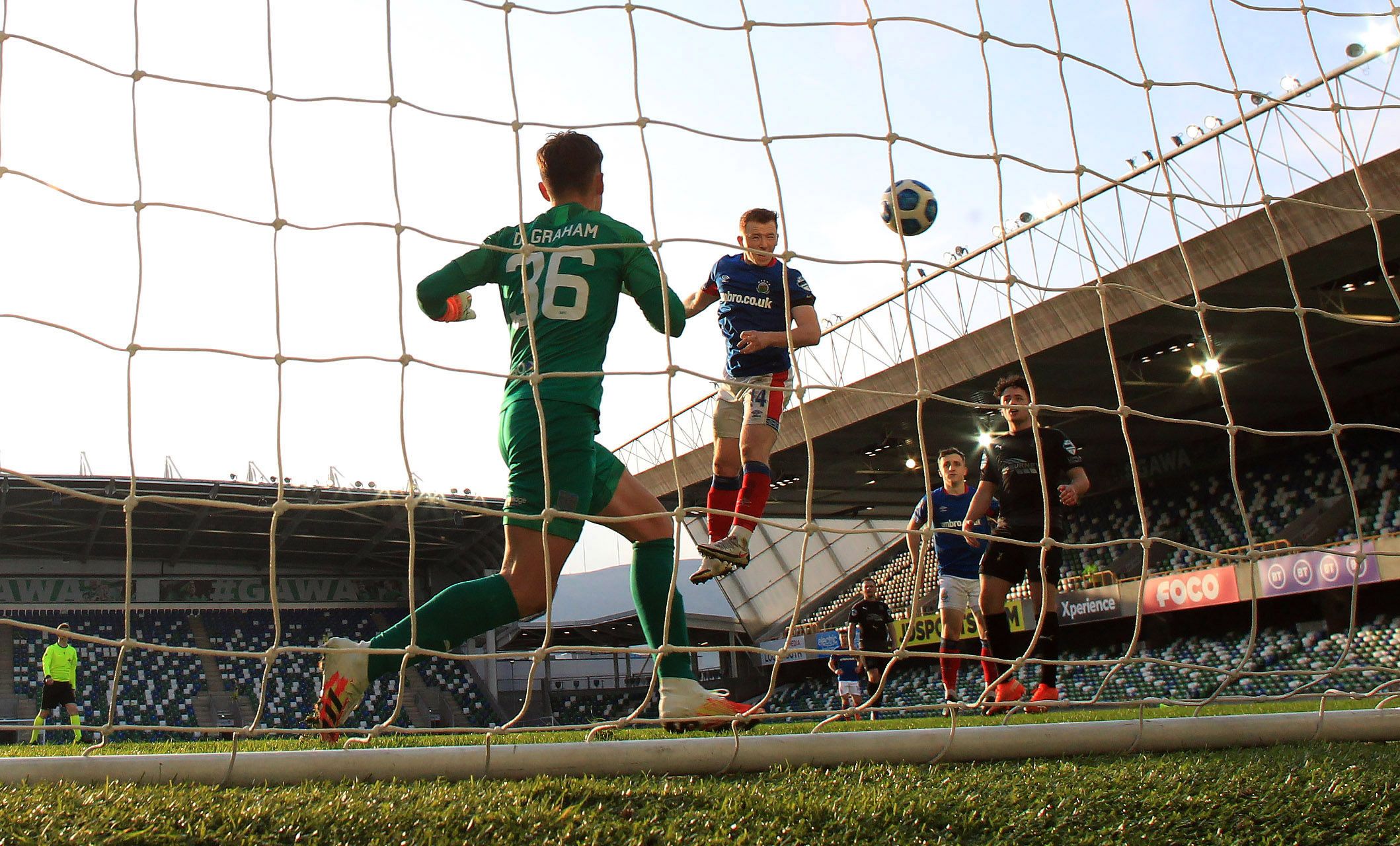 LINFIELD moved a step closer to retaining the Gibson Cup with a 2-1 win over Ballymena United at Windsor Park on Saturday evening.

With title rivals Coleraine and Glentoran playing out their second draw of the week on Friday night at the Showgrounds, the Blues are now 11 points clear at the top of the table with just six games remaining.

A header from Mark Haughey put the hosts in front, but a stunning free-kick from Shay McCartan brought the Sky Blues level on the half-hour mark.

What a partnership! ⚽️

Yet, David Healy’s men were much the better side after the break and Shayne Lavery bagged the winner when he headed home from a Kirk Millar cross.

Coleraine and Glentoran, who are second and third respectively, couldn’t be separated for the second time in four days at the Showgrounds on Friday night.

Following on from last Tuesday’s 2-2 draw at The Oval, there was little between the teams as Robbie McDaid put the Glens into the lead before Matthew Shevlin levelled proceedings on 64 minutes.

Glentoran substitute Rory Donnelly should have claimed all three points for the East Belfast men right at the death, but he couldn’t keep his glancing header under the crossbar.

Elsewhere on Friday night, Crusaders came from behind to thump Glenavon 6-1 at Seaview.

The in-form Matthew Fitzpatrick gave the Lurgan Blues the lead with a fine strike on 10 minutes, but the hosts responded to the early setback in brilliant style.

Philip Lowry had the hosts back level 10 minutes later while Paul Heatley gave his side a 2-1 lead with 25 minutes gone.

Stephen Baxter’s side dominated the second half and further goals from Ross Clarke, Heatley and a brace from Jamie McGonigle wrapped up an emphatic victory.

Warrenpoint’s woes were compounded at Inver Park on Friday night as Larne sealed a facile 5-0 win.

Five different players were on the scoresheet for Tiernan Lynch’s side with Josh Robinson opening the scoring after eight minutes before an Andrew Mitchell penalty doubled his side’s lead after 20 minutes.

Second half goals from Martin Donnelly, Ronan Hale and David McDaid completed the rout.
In the remaining fixture on Friday night, Carrick Rangers and Dungannon Swifts finished 1-1 at Taylors Avenue.

Cahal McGinty gave the visitors the lead midway through the first half before Cathair Friel levelled the game for Carrick while Jordan Jenkins had a goal ruled out for offside late on for the hosts.