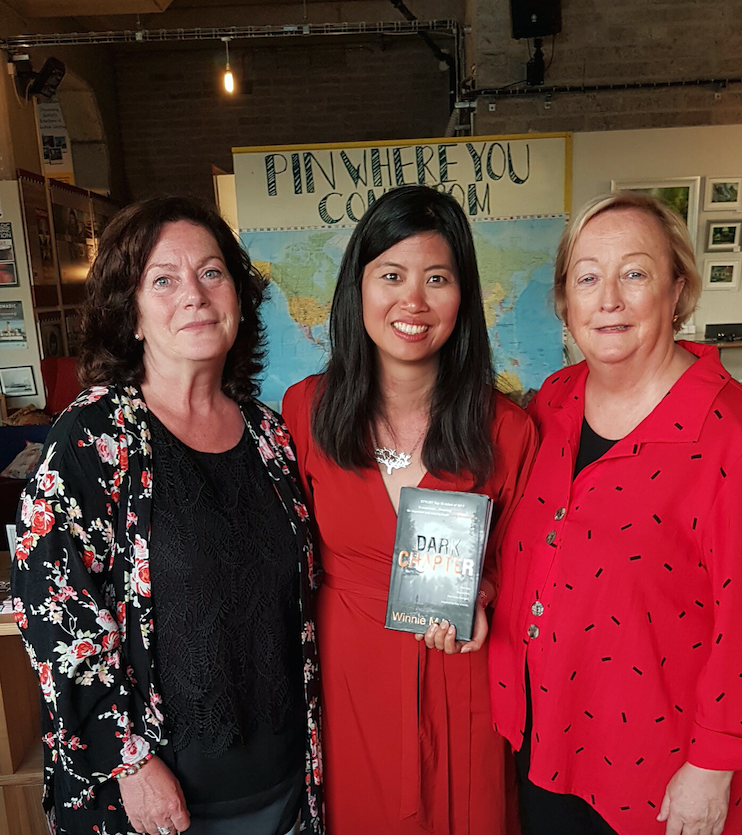 IN GOOD COMPANY: Winnie M Li with Geraldine McAteer and Monica McWilliams during a visit to Belfast to launch her novel; below, Winnie

WINNIE M Li is a Harvard graduate, an author, a producer and an activist. She is also a rape survivor.

In April 2008 while hiking through Colin Glen Forest on the outskirts of Lenadoon the American woman was viciously assaulted and raped – twice.

Her attacker 15-year-old Edward Connors approached her as she made her way through the Forest and asked her for directions to Andersonstown.

Winnie said: “I found it quite strange, clearly I was not from the area, I didn’t want to be rude so I tried to help him out.

“I remembered seeing Andersonstown on a map so I tried my best to tell him where it was. Obviously he was using that as a means of talking to me. He kept talking for around ten minutes, I found it weird and a bit annoying as I wanted to continue my walk.”

Winnie describes what happened next: “I didn’t think it was dangerous because he was so young and it was the middle of the day. There were people around at the time. I told him I needed to make a phone call to my friend and I had to go, he kept on following me. I started to realise that I was in danger but by that point there was no one else around.

“It was surreal, we always hear about rape on the news or TV shows but you never think it’s going to happen to you, but unfortunately it does. And for me it happened in a very dramatic and unexpected way. It was terrifying and surreal, most of the time I couldn’t believe it was happening. Afterwards I was in shock and I rang my friend for help, she got the police and they found me.”

Describing her life after the vicious attack Winnie says: “You never anticipate something like that happening to you and you don’t know how you will react. There’s no manual or guidebook about how to deal with rape, it was terrifying new territory I was in, my life took a completely different turn.

“One of the toughest things about the aftermath of rape is that it’s incredibly lonely, you feel like you’re the only one going through this and no one else understands what you’re going through.

“On one level I have spent years having to recover from it, I guess I will always be recovering from it. This kind of trauma isn’t something you can ever totally recover from but I decided I wanted to use it as driver for some kind of positive work.”

Winnie returned to Belfast in March 2009 to give evidence in the trial of Edward Connors. She said: “I was terrified, the thought of having to testify in public in front of my perpetrator was terrifying.

“You’re asked to give evidence in great detail and it’s quite a humiliating experience I would imagine for any survivor. It made my life a living hell to have to think about returning to Belfast.

“Because of the trauma I associated Belfast with the rape, I didn’t want to come back but I had to as part of the legal process.”

On the morning of the trial Connors pleaded guilty. Winnie said: “That was unexpected but also a great relief.”

Since then Winnie has written her debut novel Dark Chapter, inspired by her own violent rape.

“You don’t have control over what happens to you sometimes in your life, a completely unpredictable tragedy can happen to you. I have always been a writer so at some point I knew I would write about it.

“I read a lot of memoirs by other rape survivors which was really helpful. I wanted to write a book also but a fictional account that also considered the perpetrators point of view.”

Writing the book brought Winnie back to West Belfast.

“By summer 2014 I knew I had to come back to Belfast to do more research for my book. I was quite scared and anxious coming back to the city where I was raped. I was afraid in case I ran into my perpetrator again.

“I took the ferry over from Liverpool as I wanted a more gradual way of getting to Belfast. I stayed four days. Everyone was so friendly and supportive which was really encouraging. Geraldine McAteer then invited me back later that summer to attend Féile an Phobail, I took it as an opportunity to get to know the city in a different way.

“The first few times I was in West Belfast and on the Falls Road I had this fear. Rationally it’s hard to explain, but when you have PTSD [Post Traumatic Stress Disorder] anything that’s associated with the trauma brings back fear.

“As time passed and I was on the Falls Road again I felt this is a neighbourhood with a good community and friendly people. Going to all the Féile events helped me understand I suppose the history of West Belfast and what the community had been through.”

Winnie was back in Belfast this week as part of the Belfast Book Festival.

“My relationship with Belfast has gone through a lot of changes. I will always associate it with my rape unfortunately. Because of the trauma and the symptoms of post traumatic stress disorder I felt panic and nausea every time I was reminded of the rape. Anything about Belfast, even hearing the accent would bring it back. Thankfully it’s not like that anymore but for a long time that’s what happened to me. But I’m in a much better place now.”

Winnie’s novel Dark Chapter can be purchased from No Alibis bookshop and Waterstones. It can be bought online through Waterstones, Amazon, and most online booksellers.