‘No bad blood’ insists Herring ahead of Frampton showdown 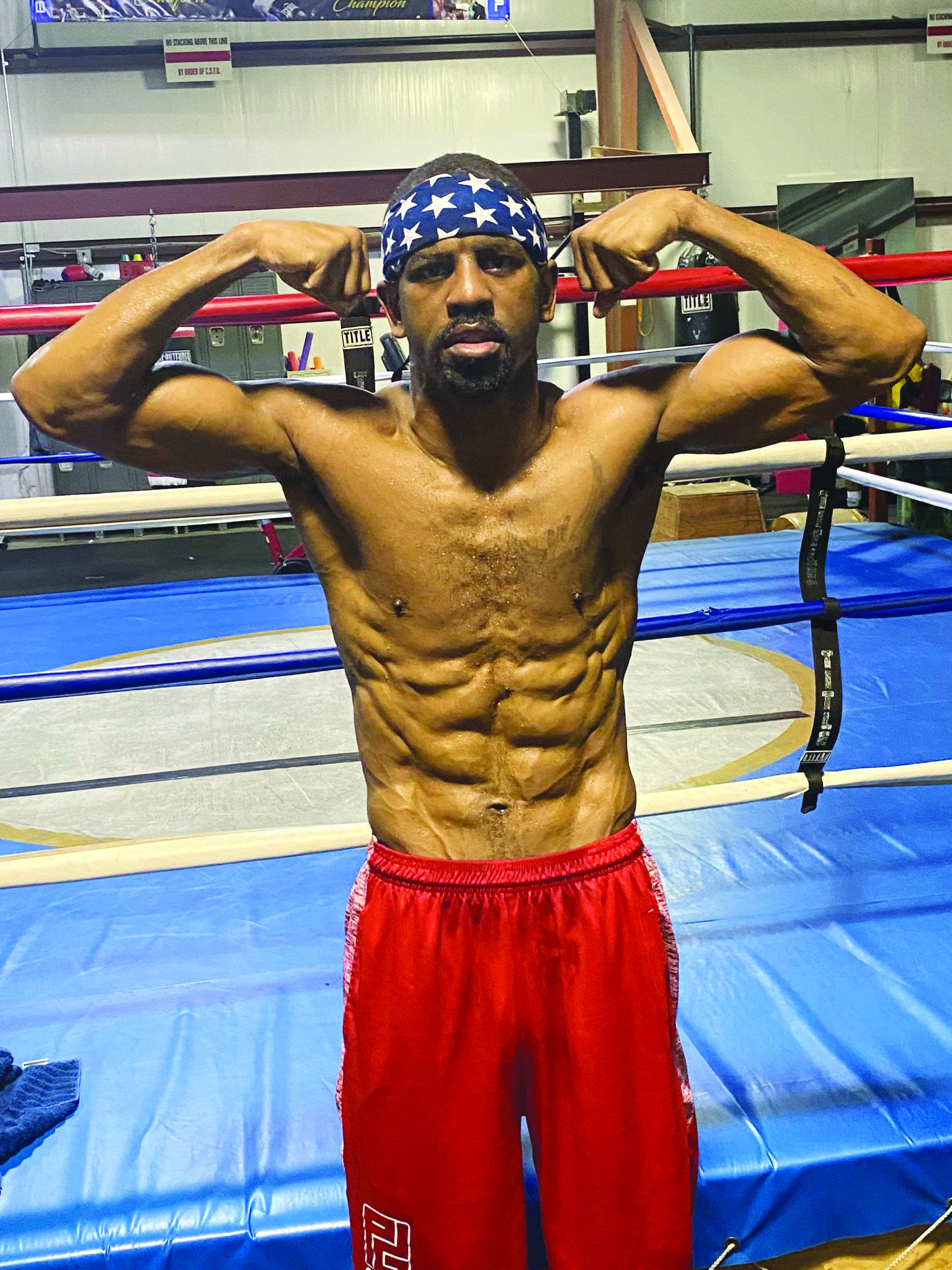 THERE may have been a few light-hearted jibes exchanged on social media, but Jamel Herring insists he has the utmost respect for Carl Frampton as the pair get set to tangle for the American’s WBO super-featherweight title in London on February 27.

The pair have been on a collision course ever since Frampton defeated Tyler McCreary in Las Vegas back in November 2019, but injury to the 'The Jackal' initially forced the fight to be delayed before the Covid-19 pandemic ensured it could not happen in Belfast last summer.

Instead, both men temporarily went their own ways and scored respective victories in late August/early September before their eagerly anticipated fight was once again back on the table.

It was finally announced a few weeks back and immediately some jibes were exchanged online, but nothing that would suggest any needle between the pair and has even been described as “most polite Twitter beef/trash talk you’re likely to see.”

That may well be the case, but this is a serious fight with Frampton bidding to become Ireland’s first three-weight champion and Herring is determined to retain his title in a fight that could catapult him out of the shadows and into the boxing limelight.

Having battled throughout his life and won the world title against the odds from Japan’s Masayuki Ito in 2019, the 35-year-old feels this is his big opportunity to score a career-best win against a legitimate name in the sport to set-up bigger fights and life-changing purses before he calls it a day.

“It still amazes me as going back a few years, nobody knew me or cared, so to be involved in something big is still a shock,” Herring told Belfast Media Group from his training camp in Colorado Springs last week.

“It’s like: ‘I’m really here and this is happening’, but I don’t get caught up in it.
“You see me on Twitter and I respond and like to talk to everyone. I feel like I’m a regular, decent human being. I know Carl Frampton has said I react to everything, but I don’t through anger. I just joke a lot and like to interact with people.

“How many world champions do you see go out and engage with the fans, even the ones rooting against them? I still respect them so long as they show respect. I don’t mind that you root for Carl Frampton, but I’ll still talk and laugh with you, go to the pub after the fight with you, so that’s just me.”

Jibes
The jibes Herring refers to stem from some clips of his training camp that he has posted on Twitter including him briefly sparring with his friend and pound-for-pound star Terence ‘Bud’ Crawford who campaigns in the heavier welterweight division.

Frampton is of course smaller than both so ‘The Jackal’ has questioned the benefit of that spar and suggested Crawford was coasting in it to boost the confidence of his friend.

However, Herring insists that it was simply a case of sharing the ring to continue his ring education and has pointed to Mexican superstar Saul ‘Canelo’ Alvarez sparring with the much smaller Oscar Valdez with both men in action later this month.

“I know Carl has thrown some jibes at me for sparring him, but it wasn’t really a spar at all - it was basically just to gain the experience,” he stressed.

Great sparring with my bro @terencecrawford. I really appreciate him coming out to camp, to help me prepare both mentally, and physically. I’m really excited for my next fight! Please stay tuned! pic.twitter.com/LnVJ6dcOiY

“If you can go in there with ‘Bud’ Crawford who is a welterweight and who comes in (on fight night) up to super-middleweight on a good day then push him around, it will make your own fight a lot easier against a smaller guy like Carl Frampton.

“I’m expecting the best version of Carl Frampton in there. I’m expecting him to box, to maul inside because of my frame and to take chances. So, when I brought Bud into camp, I wanted him to push me. It wasn’t due to the stature, but just someone who will make me bring my A game and push me. Bud Crawford doesn’t take it easy on anybody, but I need that because I don’t expect Carl Frampton will take it easy.

“I just saw Canelo spar Oscar Valdez because Oscar has a big fight as well. If you have somebody like that in your camp, why not take advantage of it and take the opportunity to soak up all that knowledge?

“We all know that Berchelt (Valdez’s opponent) is a bigger man so why not take advantage by sparring Canelo, so I commend him for doing the same thing I’m doing with Bud.”

The New Yorker, an ex-Marine who served two tours of duty in Iraq, has built his career away from the mainstream public gaze and overcame many obstacles outside the ring that has left him considering boxing a form of therapy.

At the top of his Twitter account, pinned is: “Went to war overseas, lost a child, suffered PTSD, clinical depression and a parent of autistic children. An opponent across the ring the least of my worries. Boxing is therapeutic.”

“I respect guys like Tyson Fury who came through his own personal battles in life,” he adds.

“People thought he would never fight again as he had put on so much weight, that his prime came and went, but it took a real man to stand up and admit his issues. Now he’s a two-time Ring Magazine world champion, the lineal heavyweight champion, went out and beat one of the hardest punchers out there easily so I respect that and respect him more for overcoming his battles.”

Battle
Herring’s battle in London will be made slightly less daunting due to the fact that Frampton’s large and loud support will not be in attendance due to the fight taking place behind closed doors.

However, the American was willing to travel to Windsor Park last summer to defend his title and insists that he was happy to do so, even though he would have had little support.

Instead, he will arrive in London - the same city he captained the 2012 USA Olympic boxing team - a fortnight before stepping through the ropes to acclimatise and this is the only slight disadvantage he will have given the fight will play out in front of an empty room, rendering it a neutral environment.

Went to war overseas, lost a child, suffered from PTSD, clinical depression, and a parent of autistic children. A opponent across the ring is the least of my worries. Boxing is therapeutic.

“I saw an article from (promoter) Frank Warren saying if the fight was in Belfast it would have been hostile territory, which is fine because I respect the Irish and UK crowds as I think they bring the best atmosphere,” he commented.

“I respect that as it’s people coming together and enjoying a good fight, but now it’s a 50/50 fight behind closed doors as it’s an even playing field. Even if this was in New York it would be a 50/50 fight because there is no crowd to back me or him.”

Herring had the potential to endear himself to the Belfast public, just as Nonito Donaire did in 2018 when he fought in the city, due to his affable nature and willingness to engage with the public.

The defending champion has been consistent in responding to online messages and has been happy to accept interview requests throughout the build-up, stressing the need to remain humble despite one’s status in life.

With the countdown to fight night now well underway, Herring is enjoying his time in the spotlight and this should make for a magnificent battle between the pair once the bell rings on February 27.

“Once, I was a fan and when I reached out to my favourite fighter, I didn’t get a response so I know how that feels,” he said of his willingness to engage with the public.

“I don’t think I’m bigger or better than anyone and when I get asked to do interviews I always say yes as I like to sit down and chat with anybody. I enjoy people and am honoured to be even mentioned by the fans.”