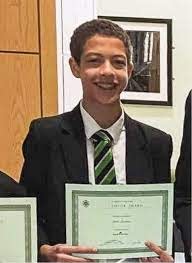 A CORONER has ruled that an inquest into the death of Noah Donohoe should be held with a jury.

Noah (14) was found dead in a storm drain in North Belfast in June 2020 six days after he went missing as he cycled to meet up with friends.

Following the ruling by Coroner Joe McCrisken yesterday, the inquest will not now proceed at the end of November as had been previously scheduled.

Noah’s mother Fiona Donohoe is hoping to secure answers to some of the questions surrounding the death of her son through the inquest process. She had made the application to the coroner that the inquest should be held with a jury.

Mr McCrisken granted the application during a pre-inquest review hearing.

Delivering his ruling, he said that while he did not believe it a case in which it was mandatory for him to swear a jury, he had considered his discretionary provision.

“It seems to me there are a number of factors in this inquest which may at least potentially have a tendency to adversely affect the ability of a jury to be objective and impartial," he stated.

“Number one is the controversial nature of the inquest involving the death of a young Catholic boy last seen in an area known to be predominantly Protestant or loyalist.”

Another factor the coroner referred to was the “persistent commentary relating to the death of Noah Donohoe, particularly on social media”.

“I do have some concerns regarding the potential for a perverse verdict in this inquest," he added.

“I have taken into account the very strongly held view of the next of kin that a jury should be summoned, the widespread public concern about the circumstances in which the death of Noah Donohoe occurred.

"Notwithstanding my reservations and concerns, I do not conclude there is a real risk of a perverse conclusion or bias.

“Therefore on balance I conclude that it is desirable to have a jury sworn in this inquest and I will exercise my discretion.

“It is imperative now that nothing should be reported or said about this inquest in a public forum, which includes social media, that may impinge upon the ability of potential jurors to hear this case impartially and objectively.”