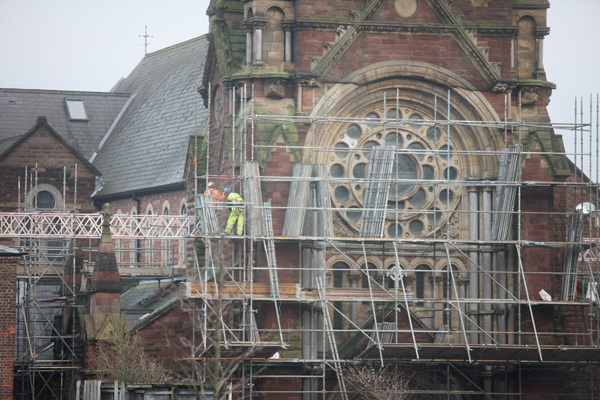 A FIRE which caused damage to a North Belfast Church is being treated as arson.

Curtains were set alight at the entrance of St Patrick’s Church in Donegal at around 5pm yesterday. The Fire Service say they are treating the blaze as deliberate and have reports of some damage in the building.

An elderly priest was in the church at the time. The fire was prevented from spreading by a fire curtain.

Speaking about the attack Bishop Noel Treanor said: “This criminal action is a violation of the sanctity of the church and an attack upon the local community that has caused significant damage to the property and left the local congregation distressed and deeply upset.

“Places of worship hold deep significance for the entire community and for their congregations and they should not be targeted.

“The PSNI and the Fire and Rescue Service were called to the scene and are currently investigating the cause of the fire. I pay tribute to these emergency services who acted quickly to bring the fire under control and have prevented further damage to this most beloved place of worship in the heart of the city of Belfast.”

Bishop Treanor added: “I am reassured by the many messages of support that the local clergy have received from across the community. Their support bears testimony to the fact that the repercussions of this action are felt by all within the community.

“I would appeal to anyone who may have witnessed suspicious behaviour in the vicinity of the church this afternoon to contact and assist the PSNI at Tennent Street with their investigations.”

A PSNI spokesperson said: “ At approximately 5.30pm on Monday, 30 January Police received a report of a fire at a church in the Donegall Street area of Belfast. It was reported that curtains in the church had been on fire. Enquiries are ongoing into the cause of the fire.”

Police say anyone with information about the incident should call the non-emergency number 101.