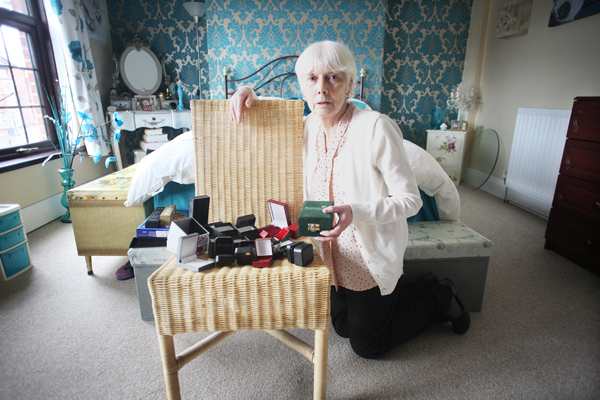 VICTIM: Anne Bradley’s home on the Limestone Road was targeted twice within a week

A NORTH Belfast pensioner has appealed to the public for help after sentimental jewellery was stolen from her home.

Anne Bradley, who lives on the Limestone Road, was at the cinema with her daughter on Friday, February 10 and when she returned home she found her house had been burgled.

Her son’s computer and a number of pieces of jewellery was taken from boxes in her bedroom.

“I was down at the cinema at Yorkgate with my daughter. I came home about two hours later to see my house had been broken into,” she explained.

“The back door was lying open. My son’s computer was away. I went upstairs and opened the top drawer in the bedroom and saw all the boxes of my jewellery were opened.

“Nothing else was touched in the drawer. There was money for my son who was going to Poland. My husband’s ashes which were in a similar type of box was also not touched, which I’m very grateful for.”

Anne went to Donegal for a break to get over the ordeal, only to return home to learn her home was again targeted for the second time within a week.

“We went to Donegal for a break and returned home on Friday. My son said he was sleeping on Thursday night when he heard a noise coming from the roofspace.

“He went to have a look and there was a pair of legs hanging down from the loft. He must have interrupted the burglar because he disappeared lightning quick.”

The pensioner, who has lived in the area for 31 years, is hoping that someone knows where her treasured jewellery is.

“It’s such a lovely place to live. You will never meet more decent people in your life. They are great people,” she said.

“I want to thank everyone who has contacted my son on social media to offer their help and asked about me. I hope someone knows where my jewellery is. It’s of great sentimental value to me. There was a golden chain my mother gave me and some modern wedding and engagement jewellery. It’s probably not worth much in value but it’s of sentimental value to me.”

A PSNI spokesperson said, “At approximately 5.00pm on Friday 10th February, police received the report of a burglary at a residential premises on Limestone Road in the Belfast area. As a result of the break in a laptop was taken along with a number of jewellery items. Investigations into this incident are currently ongoing. Police additionally received the report of an attempted burglary at the same residential premises on Limestone Road, Belfast at approximately 12.20am on Friday 17th February. A link between these incidents is yet to be established, however enquiries are ongoing at this time.”