TRIBUTE: Passionate, protective of abused, assertive of rights, Frank Quigley was a thinker and a doer 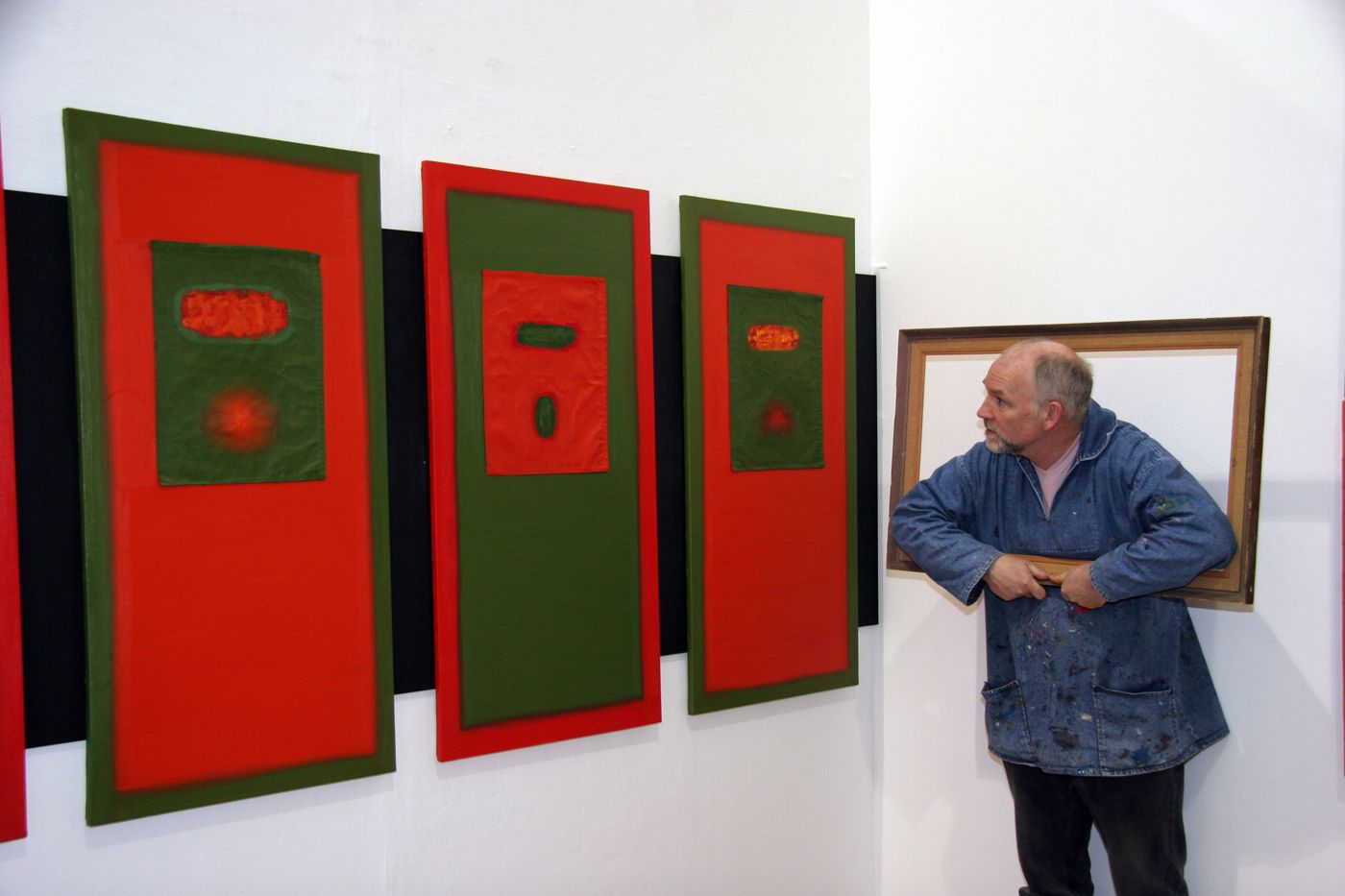 PICTURE THAT: The late Frank Quigley framed in his Belfast studio

I heard him laugh before I saw him. I was in a republican house in Andersonstown. There were several people there, some I didn’t know, him among them. It wasn’t the full-throated,  joie de vivre corner-of-the-bar or four am.-on-the-dancefloor laugh I later heard. This laugh was bleak, ironical, isolated and knowing.

I’d been telling a story about an I.R.A. veteran from the 1916-23 period I’d spoken to for the film and book Curious Journey. He was Martin Walton, later of Walton’s Musical Galleries in Dublin. When he was eighteen he’d gone out on an arms raid on a private house in Drumcondra and in a struggle had shot a man.

When he spoke of it 60 years later he went right back into the moment, wheeling around the room, his eyes wide and haunted, his hand with imaginary pistol and his whole body quaking as he relived pulling the trigger. There was a film crew standing by at the time, and when he was prevailed upon to tell the story again for the camera he did so serenely and when asked if he was haunted by it he looked straight at the interviewer and said, “Not at all.”

Frank had drawn as a child. He grew up in Cyprus Street in the Falls. His father died when he was nine and his mother took on a cleaning job to keep herself and her seven boys. Sometimes she brought home art magazines for Frank and he would try to make copies of what he saw there.

This was the line that provoked Frank’s unusual laugh. It seemed both mournful and accepting of a highly particular fate. I’d never heard anything like it. I turned around and saw him looking out the window with a melancholy smile. I realized how far I was from knowledge like that.

In the story 'The Things They Carried' Tim O’Brien lists some of the things carried by American soldiers in Vietnam: can openers, flak jackets, photographs of girlfriends, M-16s, Claymore mines, ghosts, their lives and the lives of comrades, fear, grief, shame. What they didn’t carry was an understanding of why they were there or a belief in their mission. Unlike the Viet Cong. Or Frank Quigley.

Frank had drawn as a child. He grew up in Cyprus Street in the Falls. His father died when he was nine and his mother took on a cleaning job to keep herself and her seven boys. Sometimes she brought home art magazines for Frank and he would try to make copies of what he saw there. As his skill grew, so did his fascination and commitment. Then one day in 1970 he ran into a school friend on a street corner. The Northern state’s long-implicit violence had by then exploded into a relentless and pervasive viciousness. The burning of Bombay Street. The assault at Burntollet. The Falls Curfew.

There was no one to turn to for protection. The police and the British army were in the vanguard of the terrorism and the rest of the world, including the Free State, turned their backs. Frank’s school friend asked him what he thought. “It’s bad,” he replied. “Some think and some do,” said the friend. “What do you mean?” asked Frank. The friend then led him through back alleys, over walls and into a cellar where he opened the lid on a coal hole containing old First World War rifles. “That’s what I mean,” said the friend.

Frank stepped out of his own life and into the public domain, into history, moving from recruiting meeting to training camp and then into D Company of the Belfast Brigade and later rural guerilla warfare in South Armagh. I asked Frank’s brother Tommy what he was like when they were growing up. “Private, thoughtful, intelligent. He was very protective of us. He’d take on anybody, any bully, no matter how big. He was absolutely fearless. And he was meticulous. If something had to be done you’d go to Frank.” The child, by all accounts, was father to the Volunteer.

After I heard Frank laugh that day I used to see him here and there when I was in Belfast. The war was over and he’d gone back to art. He’d obtained a degree. He covered walls in the Falls and Shankill and Cork with murals about the GAA, car crime, Nelson Mandela and Noah Donohoe. He did portraits and abstracts and anti-Iraq war canvases of striking originality. Everything was meticulous, protective of the innocent and abused, assertive of rights, unafraid. Perhaps certain kinds of art and certain kinds of war are not so far apart when there is a belief in the transformative power of both.

Frank’s laugh so heavily freighted with a knowledge he shouldn’t have had to acquire formed a nexus in my head with the war in Ireland and the making of art. It seemed to contain in nuclear form something I would like to say. The idea for a novel with an I.R.A. sniper who was also an artist at its centre was engendered. I felt I couldn’t do it without Frank. I asked him if he’d come to Poland where I live and tell me of his experiences. Astonishingly to me, he agreed. I met him at the airport.

He came out in one of the trilby hats familiar to anyone who knew him and for three days we sat in my garden and walked the shores of the Vistula as he told me about his life as a Volunteer and a painter. He was generous, modest, candid, precise. I wrote the book, eventually. The central character isn’t Frank, but I wouldn’t have had a hope of delivering him with authenticity to the page without his help. It was a billion to one, he told me, that he was still alive to provide it.

Frank 'Lucas' Quigley passed away on 25 September 2022. He is survived by his children Cormac and Aisling, grandchildren and large family circle. Gerry Adams paid tribute to him in his weekly column on 8 October.

Curious Journey, by Timothy O’Grady and Kenneth Griffith, has recently been republished by Greenisland Press and is available at The Lark Bookshop, 55 Falls Road. The novel inspired by Frank Quigley’s overheard laugh is called Monaghan. It can be pre-ordered by searching for Monaghan at the publisher’s website, www.unbound.co.uk.