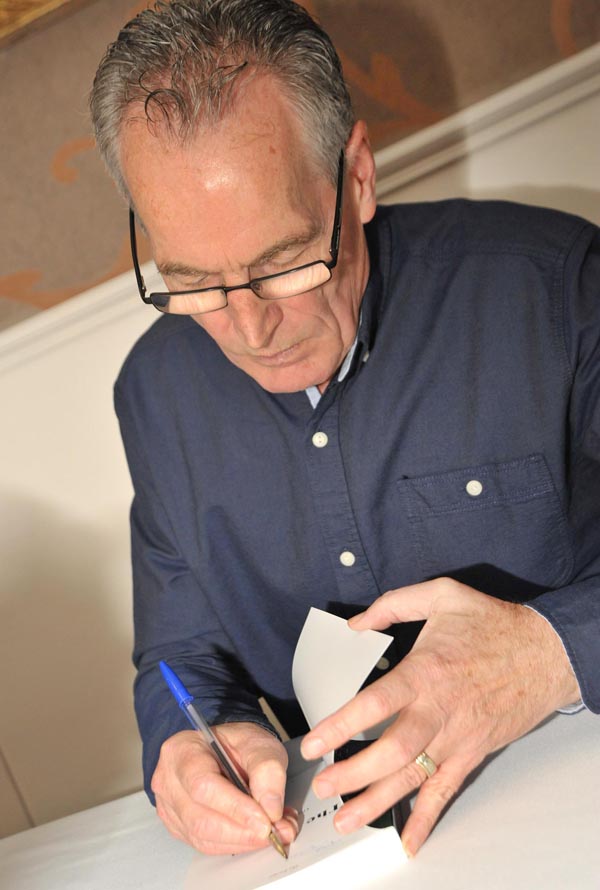 Gerry Kelly signing copies of his book on the escape

Sinn Féin MLA Gerry Kelly says he believes unionists want to bury certain historical events of the Troubles after complaints were made about a forthcoming film on the 1983 Long Kesh escape.
Mr Kelly, who was a leading organiser of the break-out which saw 38 IRA men overpower prison officers and make their escape, said he had nothing to do with the production and hadn’t been contacted. But he added the facts of the escape are there for anyone to read and he has no problem with a film being made.

“I haven’t been approached, but having said that, the story of the escape is common knowledge. My hope is that they would keep it as close to the truth as possible and I wish them well.”
Mr Kelly released a book on the escape two years ago detailing his role in the break-out. He has been accused of being the prisoner who shot a prison officer twice during the escape.
That officer suffered two gunshot wounds and a second, James Ferris, suffered stab wounds and died of a heart attack. Mr Kelly has previously told the North Belfast News that there’s uncertainty over whether the heart attack was brought on by the stabbing.

“That was put the court and the court rejected that. The prosecution service and the RUC tried to put the blame on the prisoners but that was rejected.”

Mr Kelly has consistently refused to comment on whether he was the prisoner responsible for the shooting of one of the prison officers.

When news of the new movie broke, the fact that the Irish Prison Service had permitted use of its facilities in Cork for filming caused an outcry.

TUV spokesman Jordan Armstrong said he was concerned at how the film would be viewed by some victims.
“If it goes on to portray those who shot a prison officer in the head as some sort of Steve McQueen-type characters rather than the bloodthirsty criminals they were in reality, that hurt will by magnified many times over,” he said.

But Gerry Kelly said that was another example of unionists wanting to “bury” history.
“It’s a feature that every time someone gets involved in anything historical that doesn’t look well for unionists, when they want it buried, they are against the past being opened up and looked at.

“That goes for anything about the hunger strikers and I was reminded of it again when I went to Navan Fort recently in Armagh. That is a hugely historically significant site but unionists wanted to do everything to prevent Irish signage being erected. There’s nearly a systematic policy of hiding from history certain things that happened that they don’t want to know the truth about.

“I said in my book that what I wrote was from the point of view of the prisoners. If prison officers want to write their history then that’s a good thing.

“You can’t demand some histories be sensitive when British historians write about all the things the British Empire was involved in without sensitivity. It just doesn’t make any sense.
“This comes down to their view that the only narrative should be the unionist narrative. But there are a number of narratives and people can agree or disagree, that’s part of history.”
Among the criticism is that the film may portray the escape as daring, but Gerry Kelly says that description came from the British.

“(Sir James) Hennessy who wrote a report on the escape for the British government and was no fan of republicans said the escape was like Colditz. Maggie Thatcher, who was responsible for the deaths of the hunger strikers, called it the biggest crisis in British prison history. To try and bury that would be very foolish and to do so is highly political. They don’t want anything to do with anything that portrays republicans or nationalists as having achieved anything.”

The outgoing MLA, who is hoping to be reelected in May’s Assembly election, said if he could speak to the filmmakers he would remind them of one thing.
“When it happened I was only 30, so I hope that’s reflected in who they’ve cast to play me.”