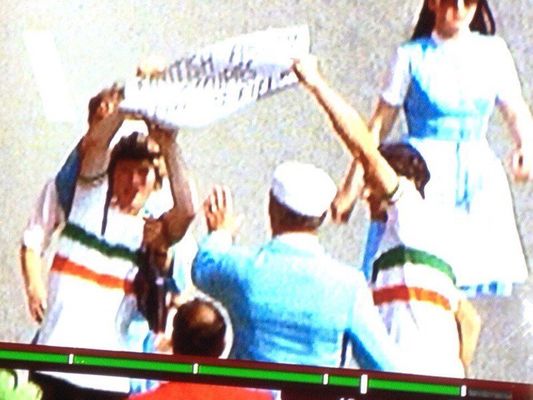 PLEA: ‘Homer’ holds up a protest banner in the race amid chaos at the cycling competition

A WEST Belfast cyclist has recalled the events of 48 years ago which changed the sport on the island for good – and which feature in an intriguing RTÉ radio documentary.
Brian ‘Homer’ Holmes was just 19-years-old when he was approached by well-known republican, Con McHugh (AKA 'The Bald Eagle') to get into training ahead of the Olympic Games in Munich, 1972.

The NCA was denied access to international sporting events because of its principled opposition to partition. It was then that they decided that they would try and sabotage the official road cycling event in Munich on the world’s biggest stage.

“We didn’t recognise the border. By being registered in the two other bodies, it gave justification to the border,” explained Brian (67).

“The NCA was not recognised and had been excluded by the Irish Olympic Committee despite having some superior cyclists.

“We wanted to protest about British interference in cycling in Ireland.
“At the time, the country was in turmoil. It was an opportunity to show the world what was going on and the injustice taking place.

Our latest #DocOnOne on @RTERadio1 now: Green and Gold. In the 1970’s a vicious split in Irish cycling mirrored the politics of the time. But one day in September 1972 it spilled onto the biggest stage of them all -the Olympic Games. https://t.co/sJ3H89x7Tp pic.twitter.com/HkOkAOs4tN

“We were aiming to protest against the British occupation of our areas, including GAA property, the brutalisation of prisoners, the loyalist murder gangs with whom the Brits were colluding, and the fact that there was no all-Ireland cycling team.”
The NCA plan was to drive a secret team of riders across Europe in time for the Munich Games and have them covertly take part in the race.

What followed on September 7 1972 was confusion and pile-ups as the protesting cyclists joined the race from various positions on the road. Leaflets were also scattered out detailing information about why they were protesting.

NCA cyclist Gene Mangan from Kerry opened up a ten-yard lead. He had no number and was not entered in the race. Fellow protesting cyclist Batty Flynn was forcibly taken out of the race by police on motorcycles. All the protesters were subsequently arrested and taken into custody after the event.

After the protest at the Munich Olympics, Brian returned home and was soon arrested. He spent three years in Long Kesh. The Games were remembered locally for a sporting reason — Mary Peters lifted Gold in the pentathlon — and the storming of the Israeli quarters in the Olympic village by Palestinian militants which resulted in the deaths of 11 members of the Israeli team, the five attackers and a German policeman.

Today, Brian has no regrets about his own moment of Olympic history.
“It took a while after that for Irish cycling to become one,” he said.
“I have no regrets. I would do the same thing in the morning.”

He added: “We were condemned for bringing politics into sport. It was okay for a big nation to protest, for example Maggie Thatcher refusing to send athletes to Russia in 1980.”

The events of Munich 1972 features in a RTÉ Radio 1 documentary ‘Green and Gold’. The story of the hostage-taking is told in the documentary One Day in September below.