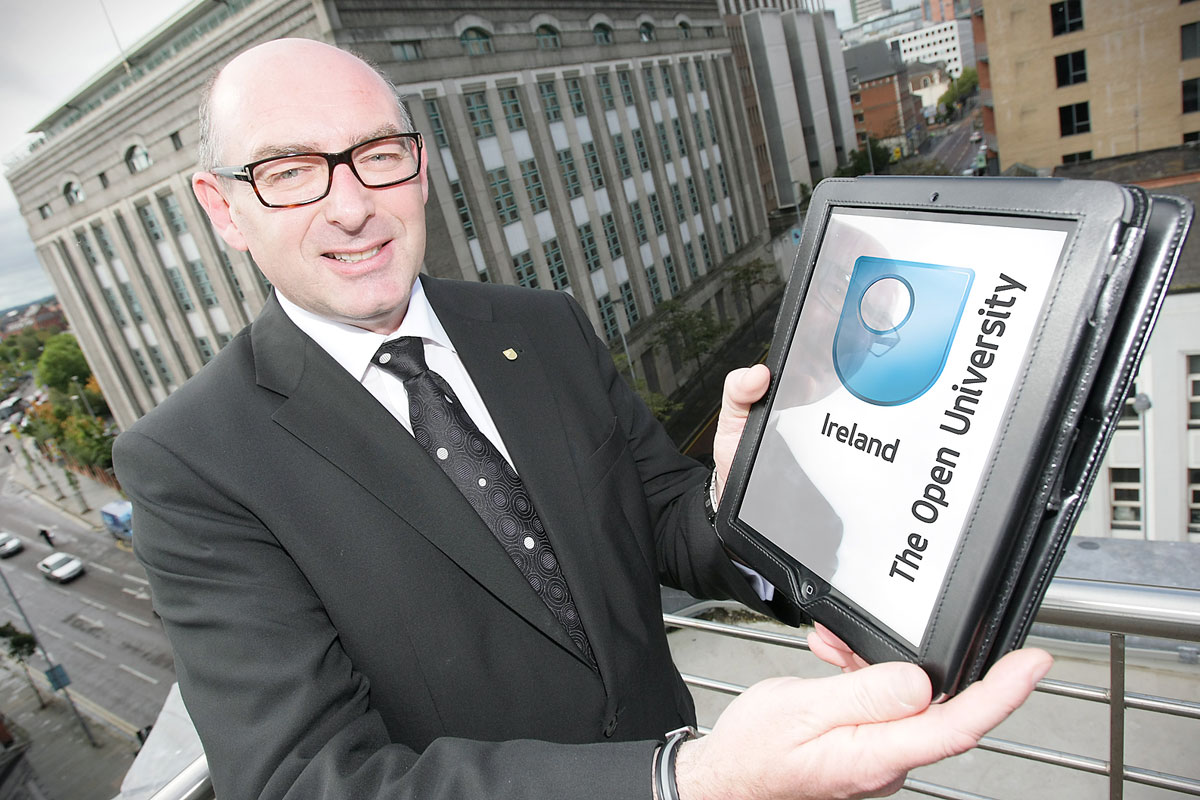 One of the abiding memories of my university days was the Olympic-standard sprint from the tutorial class to the library. Nobody spoke about the sprint, but everybody was aware of it. In the tutorial, the lecturer would hand out a list of books you needed for the work at hand. The library housed one copy, two at a push, so if you wanted it, you needed to have one foot out the door at the end of the class and be a step ahead of your competitors/fellow-students until you signed it out of the library.

I learned this week that the sprint is obsolete. I learned it from a man in the know: John D’Arcy, Director of the Open University in Ireland.

John has been at the helm of the all-island organisation for almost a year. He works chiefly out of the OU’s superb new premises in Victoria Street, but takes weekly runs to the Dublin office.

The university has an impressive 4,000 students  enrolled on both sides of the border and can also boast more downloads than many top musicians. That’s because not only is the sprint outmoded, so too are the late-night lectures on BBC2 that defined the Open University for several decades. The institution has embraced technology in a way that other organisations can only dream of.

“Most of our learning material is on iTunes now,” explained John. “We have had 38 million downloads in two years, that’s more than a lot of rock bands.

“We have over 300 electronic books, videos too and obviously lectures as well as learning apps including virtual microscopes. It’s all very fascinating. We are very much a digital university with no classrooms which means we can get to you wherever you are.”

The attraction – and a fast-growing attraction at that – is the OU’s flexibility. The (plentiful) courses, under- and post-grad, work around the students who tailor them to suit their own lifestyles.

“Our students work at their own pace and the studies fit into their lives, we are very flexible and that’s a major attraction,” said John.

“There’s a real mixture of students studying with us. The core would be 25- to 45-year-olds, but there is a lot of interest from younger people and that probably has a lot to do with fees. We have also had students in their 70s, because it’s all about getting a learning experience.”

The structure of the courses also adds to that all-important flexibility aspect.

“With the Open University you can sew together your degree, you don’t have to commit yourself to one subject because there is credit transfer available.

“In terms of post-grad courses, we have MBAs, Clinical Leadership and many other wide-ranging courses. It’s all there and the students decide how it will work for them.”

With such emphasis placed on flexibility, it’s no surprise that the OU has come out on top in recent student surveys.

“We are driven by what the students want,” said John.  “We are rated number one for student satisfaction in Scotland and Wales, here we are joint first and in England we are in the top three.

“We want to expand on that and work with other universities to make sure we have the best higher education sector.”

And it’s not just other universities that they work with, as he explained.

The OU, which has taught more than 1.7 million students worldwide, has been highly rated for teaching quality, and John too was quick to praise his own staff.

“Most tutor groups are all-Ireland,” he said. “Our tutors are from Ireland and we have 400 associate lecturers across the country. I’m very lucky to have such forward-thinking staff, they are fantastic and it’s a joy to work alongside them.”

The OU also has a 40-year partnership with the BBC, which has moved from late-night lectures by bearded, sandal-wearing academics in the 1970s to prime-time programmes such as Life, Bang Goes the Theory, Made in Britain, Coast and The Money Programme. Clearly this is an organisation that moves with the times. However, John won’t allow it to rest on his laurels and is busy planning for the future.

“We hope to build on our student numbers, build a greater awareness of who we are and what we do and we also want to foster closer links. We have very ambitious plans north and south of the border and I’m looking forward to the challenge.”