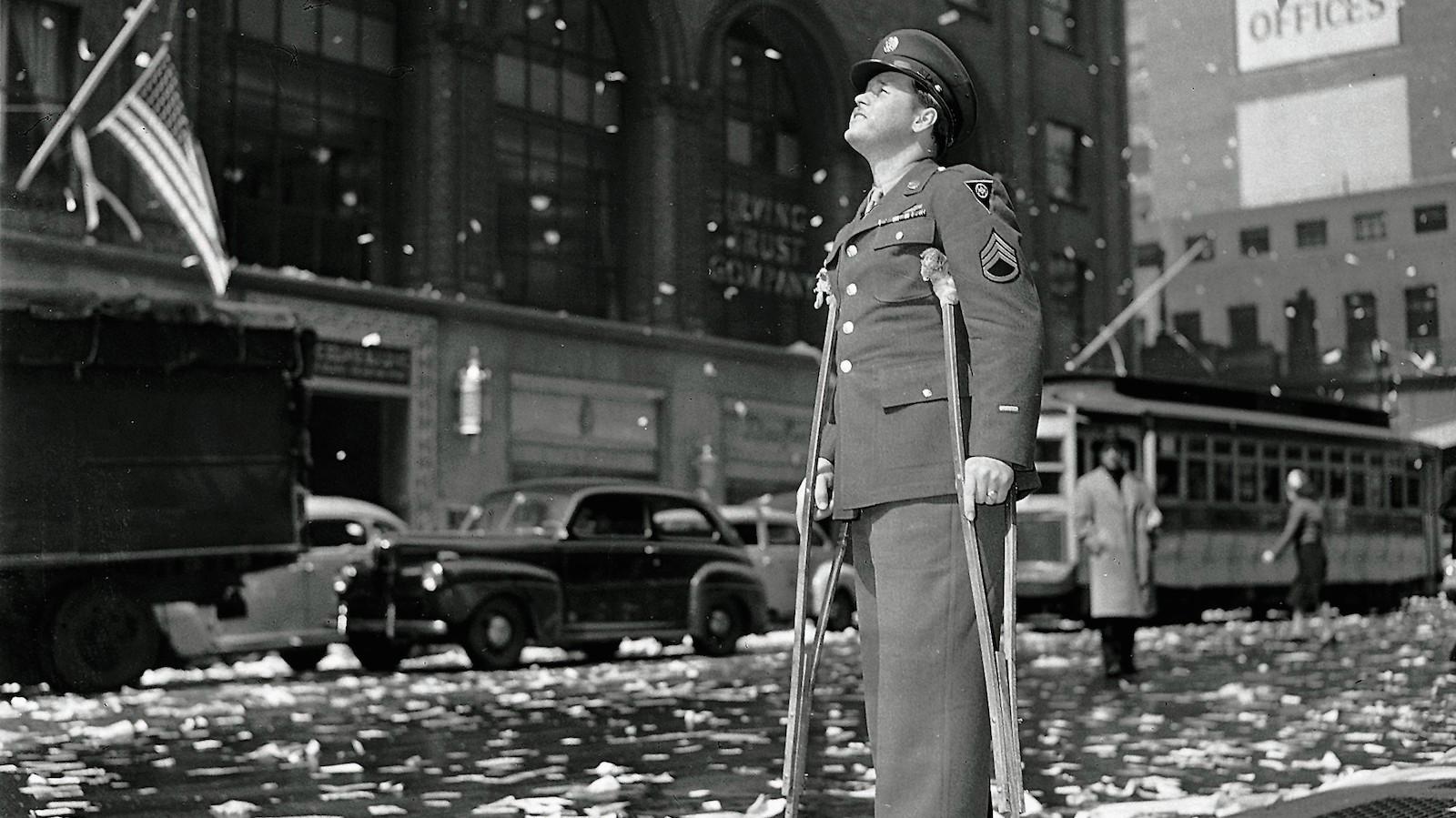 WAR IS OVER: VE Day New York 7 May 1945
WHERE I lived growing up in Dublin was pretty diverse. It had been a thriving Jewish area, with a synagogue, a Kosher butchers and bakery and a Jewish school, which I attended.

Around the corner lived Miss Bernstein, who lived in a gorgeous little house, first with her companion, and then on her own. Miss Bernstein loved children. She always had cuddles for me and my brothers, and always had boiled sweets in the pockets of her dress to give anyone who dallied long enough.

I regularly dallied at her house, particularly in summer, because she had huge lemon verbena bush at her gate, alongside peace roses that gave heavy perfume from early June the whole way through summer. There was a peace rose in my garden too. In our streets there was a peace rose bush in every garden where Jewish families and individuals had lived after the Second World War. They are easily identified with big heads of yellow petals whose tips turn blood red. It doesn’t take a huge leap of imagination to recognise why these families planted them in communion. The bushes were all over 30 years old when I began to be aware of them and they all were glorious. The elderly Miss Bernstein looked after hers like the petals were of gold.

One late spring she was pruning hers and I stopped to talk with her. I was concerned she was giving it too hard of a prune. She was very tiny, barely the height of the bush itself when it was in bloom. She laughed when I expressed concern and suddenly looked taller as she stood up. Her heavy Latvian accent normally heard laughing, became very serious.

“My father escaped from Latvia with me and my mother when Stalin made a deal with Hitler. He began the pogroms against the Jews. We travelled on trains with goods, not people. We were not considered people. We left behind everyone. My grandparents. My aunts and uncles. My mother was pregnant, too old for babies and fell ill. She died in a house of strangers in Spain who let us stay for a week. My father and I kept moving. We did not stay long enough to bury her. We got as far from Latvia as we could go on trains, walking and eventually by boat. We got to Dublin.

“Your grandmother gave us food and found us a room to stay in.

“My father had money. He had been a banker. He bought this house. He died before we moved into it. The war was not yet over. When the war ended the rabbis organised for Jews  to plant roses for those we did not bury. To remember. When I prune it is for this bush to survive. If only one rose comes back it survives. Pruning it means many, many, roses will come.”

I had conversations yesterday I do not remember, but I recall those minutes and that lifetime of experience like it is a movie being replayed. Like so many others, particularly Latvian Jews, Miss Bernstein had no living relatives once the Second World War ended.

This summer 75 years since the ending of the last world war is being remembered. Some celebrate. Some talk of victories. Miss Bernstein on a cold Spring day taught me that war is nothing to be celebrated.