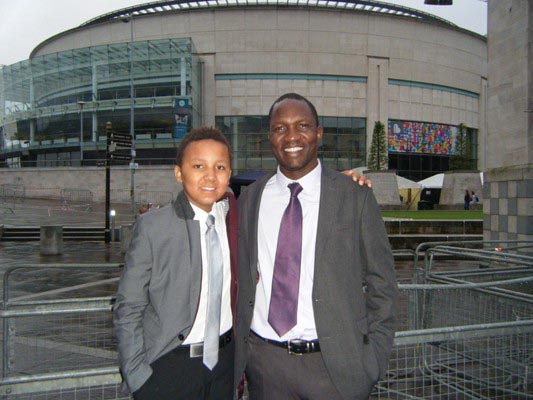 OBAMA OVATION: Elly and son Dylan queue at Waterfront Hall for Presidential visit in June 2013
November 8 2008. On this day we the African and Caribbean people living in Derry organised one of the first Obama victory events worldwide. Having just been elected, he was President-elect, and we were celebrating, never mind someone challenging him at the US Supreme Court.

I think this party we had in Derry would go down as the first of its kind anywhere in the world, if there was a signed “copy” we would have done well at Sotheby’s or our local auctioneers in Ireland.

So that November 4, 2008 was a stunning win for this African-American senator, his father Barack Snr, originally from Kenya, and mother Ann Dunham, of Irish roots, what a breath of fresh air.

Thank goodness, his opponent Senator John McCain accepted defeat with much grace. We had a Zimbabwean ‘mbira’ or thumb piano musician on stage, we sang everything from traditional African songs to reggae and local disco anthems!

Life was very sweet back then thinking that this one man and his wife of course were going to steer the whole world towards a peaceful direction. Comments for another day.

Five years later and my son Dylan and I had been waiting in the queue at the Belfast Waterfront Hall from about 5.30am, it was freezing cold.

The suits you see here were not that padded, so not much justice when you don’t respect the weather. The auditorium at the Belfast Waterfront was packed to capacity.

All manner of powerful public officers and politicians were relegated to the back top of the building. The then Lord Mayor Máirtín Ó Muilleoir can bear me witness: when the Obamas are in town the youth must be heard. Young people took the vantage seats. This is what I call a display of youth power.

When Michelle took the podium, she told the youth to brave their way through whatever tasks they wanted to accomplish, nothing should stop them, she got standing ovations. Obama even joked that he knew why it was difficult to speak after Michelle, because “she is much better than me” and that is the truth.

Like the rest of the young people bound in that honourable day, instead of being in the classroom, Dylan was very thankful for hearing the wisdom of the Obamas who said they understood the unique challenges of youth in Northern Ireland. The bitter prejudices inflicted upon them all by the past. For the first time ever in that week, Northern Ireland was hosting world leaders, an unimaginable happening in comparison to forty years ago.

In this speech, when Obama said that the youth can now fall in love with whoever they wanted no matter race or creed, this brought hope to Northern Ireland.

And did I forget to share with you the magic wand I waved at the American Consul in Belfast so we could get the tickets to the Waterfront event? I managed to use the Kenya card. I politely reminded the consulate person by phone that Obama was as Luo as myself, the ‘tribe’ of my people! And that is how I jumped the queue and got my son to see the Obamas in June 2013.

Elly Omondi Odhaimbo is a Kenyan writer based in Belfast.