OPINION - ELLY ODHIAMBO: Thanks to PSNI, My Hate crime attacker gets to write a letter, I get to attend A&E 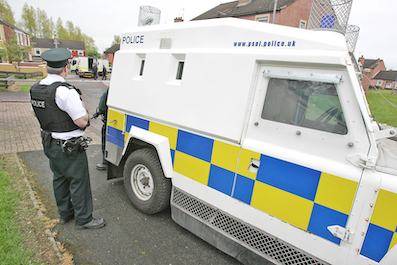 PSNI and Army Techinal Officers at a security alert in Glenkeen. 115mj14

LAST Friday was a normal day at work. I work in mental health support services. I clocked off at 9pm, had an hour’s break before starting a second shift from 10pm to 7am Saturday morning. So, I decided to head on to a supermarket. Mission: to buy a sandwich for work.

When I got there, I followed the new retail protocols of social distancing. I got to the aisle that had what I wanted to purchase.

When I got there, a man was standing in front of the cold shelves, presumably picking something for himself. I signalled that I was lifting a sandwich and the next thing I knew was the man using his elbow to strike the left side of my ribs with much force. It was a shocking incident.

A woman who was standing nearby shouted at the man to stop it. She was in company of another man and they asked me if I was alright, they offered to give their names to the police as witnesses.

I phoned the police, they came and asked me a couple of questions about the incident. I was thinking about my 10pm shift and told the police that I would be happy to hear from them once they have located the assailant. I drove on to work.

At 3am, the police phoned me and declared that the man will not be referred for prosecution because he had told them that, yes, he accepted that he had attacked me and he was deeply sorry. The police said that the man would write a letter and they would deliver it to me.

I felt mental anguish that police can actually behave like that. That a man attacks a shopper, accepts it, and to them it is not worthy of prosecution because of his apparent apology.

First, I will not accept an apology from this man. It was a hate crime. He also hit me just above where my insulin pump sits. I was lucky he didn’t touch the canula and tubing because that force he used could have done great ripping damage to my body.

I told the police this. But all they said was that they have used what is called Community Resolution to give me justice! Shame on the police and on this man. I will bang on about racially motivated injustices, crimes and prejudices for as long as I live. I will do this without permission from anyone. I did go to the Royal Victoria Hospital that Saturday morning and received emergency care, x-ray and medication to take home.

The doctor who attended to me at the A&E department said that injury would take  weeks to heal.