OPINION - GERRY ADAMS: 'Race is the big unresolved issue at the heart of US society' 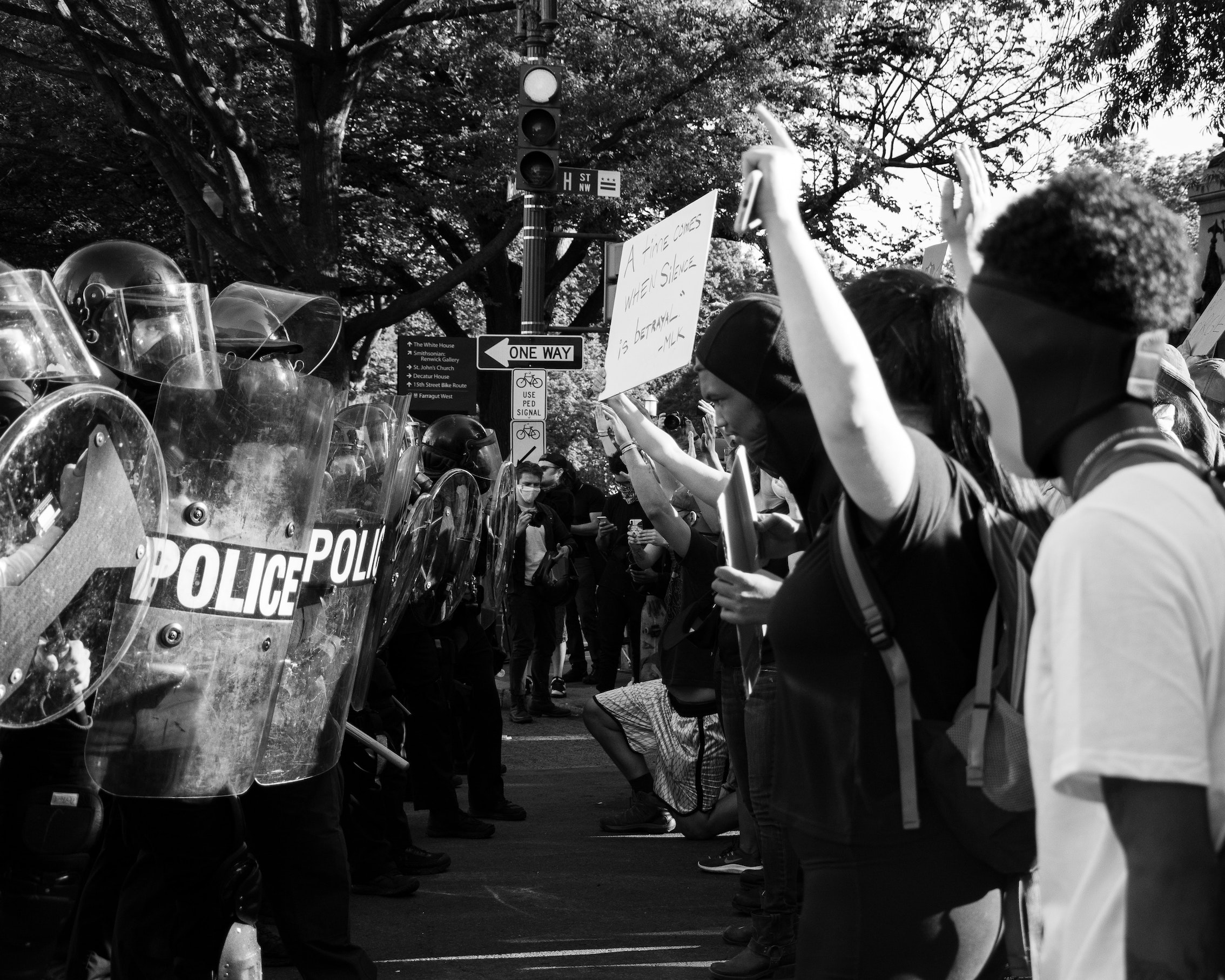 You don’t get to be racist and Irish

You don’t get to be proud of your heritage,

plights and fights for freedom

while kneeling on the neck of another!


These are the first four lines of a new poem by the singer Imelda May. It is a powerful and moving poem which vividly sums up my feeling on this divisive issue.

A sad fact of life is that racism exists in most societies. That reality struck home in recent weeks following the killing of George Floyd in the USA by Minneapolis police officers; in the response of President Trump, and the brutality of elements of the police service who have attacked peaceful protestors.

In my visits to the USA over a quarter of a century I have met many good people and many good leaders. Leaders in business and commerce, in communities, the Arts, the Labour and Women’s movements and in politics.

But I have long believed that race is the big unresolved issue at the heart of US society. It and sectarianism in our own place are two sides of the same coin. Both can be found in societies across the world where those in power or those who seek power, use racism and sectarianism as a means to divide, control and exploit people.

That’s why Imelda Mays poem is so pertinent. And so important. We Irish who were/are subjected to racism cannot treat others as we were/are treated. When the English ruling class first invaded Ireland they said it was ‘to civilise the barbarians’. The native Irish were variously described as lazy, stupid, violent, backward, barbarous and inferior. Over the centuries that followed English writers constantly justified English actions by claiming that Irish people are culturally inferior and that the English would civilise us. An English writer Edmund Spenser in the late 16th century wrote of the Irish: “...they steal, they are cruel and bloody, full of revenge, and delighting in deadly execution, licentious, swearers and blasphemers, common ravishers of women and murderers of children.”

English writers and historians frequently presented the Irish as rogues, drunkards and brutal. David Hume in his influential ‘History of England’ first published in the 1750s wrote: “The Irish from the beginning of time had been buried in the most profound barbarism and ignorance.”

It was this sense of superiority, allied to the development of plantations in the Caribbean and in America, which saw England become the main European slaving nation. The language used to describe Africans was essentially the same used in relation to the Irish. The Irish were ‘inferior’; the Africans were ‘heathens’. Hume, who accused the Irish of barbarism and ignorance, described Africans as “naturally inferior to the whites.” He wrote: “There never was a civilised nation of any other complexion than white ...”

RACIAL SUPERIORITY A CONSTANT THEM OF IMPERIAL HISTORY

This belief in their racial superiority by the English elites over the Irish and over African peoples, and of the white race over all others, has been a constant theme of British Imperial history. A history which English people are not taught. It can be found in the stage Irish and the jokes of the 19th century which labelled the Irish as idiots and drunks. Irish people and black people were often compared to apes. In 1862 the magazine Punch, which frequently published cartoons in which the Irish had ape like features, wrote; “A creature manifestly between the Gorilla and the Negro is to be met within some of the lowest districts of London and Liverpool by adventurous explorers. It comes from Ireland, whence it has contrived to migrate; it belongs to a tribe of Irish savages ... it talks a sort of gibberish. It is moreover a climbing animal, and many sometimes be seen ascending a ladder laden with a hod of bricks.”

Irish emigrants seeking a new life in the USA and other places following An Gorta Mór also experienced racism in their new countries. I have a small notice that was in the window of a house in Boston advertising rooms for rent which says ‘No Irish need apply’.

As Ireland grappled with Home Rule at the end of the 19th century British racism was given expression in a virulent anti-Catholic rhetoric. Unionist political leaders who opposed Home Rule merged racism with sectarianism. It became part and parcel of the northern state established by partition. Catholics were presented as inferior, lazy and living off the dole, and with too many children. In May 1969, just months before the August pogroms ignited decades of conflict the then Unionist Prime Minister of the North Terence O’Neill – a liberal unionist – echoed this. He said: “It is frightfully hard to explain to Protestants that if you give Roman Catholics a good job and a good house they will live like Protestants because they will see neighbours with cars and television sets; they will refuse to have eighteen children. But if a Roman Catholic is jobless, and lives in the most ghastly hovel he will rear eighteen children on National Assistance. If you treat Roman Catholics with due consideration and kindness they will live like Protestants in spite of the authoritative nature of their Church".

Racism also plays a dangerous and unacceptable role in society in the Southern state. In 2004 the Fianna Fáil government introduced the Twenty-seventh Amendment of the Constitution. It stripped a child born in Ireland of immigrants of its right to Irish citizenship.

LITTLE HAS CHANGED FOR TRAVELLER COMMUNITY

In 2017 the decision to recognise Traveller ethnicity finally brought the Irish State into line with recognition already in place in the North, as well as in England, Scotland and Wales. Sadly little has changed since then. Last year the European Commission against Racism and Intolerance (ECRI) produced a comprehensive report on the treatment of Travellers, refugees, the Direct Provision system, anti-racism laws and hate crime. The report was a scathing indictment of the failure of successive Fine Gael and Fianna Fáil led governments. It identified major legislative and policy failings in relation to hate speech, hate crime, the response of An Garda Síochána to these and the use of ethnic profiling by the Garda.

So, we cannot decry racism in the USA and not recognise its odious presence in our own place. We cannot rail against racism in the USA or elsewhere without fighting racism in our own place. Racism is especially toxic when it infects the agencies and institutions of the state. And it is obvious to all of us who lived through the baton charges, the rubber and plastic bullets and the gas that were used by the RUC and British Army that they don’t work. They are not the answer. What works is treating people as you would want to be treated yourself.

So, be alert to racism. Understand that racists will resist change. Some will even seek to use periods of resistance to racism as an opportunity to dig in deeper. To demand greater repression, more laws to deny rights to citizens, to oppose and frustrate accountability and transparency within the justice system. They must not succeed. In the USA. Or in Ireland.

You don’t get to be racist and Irish

You don’t get to be proud of your heritage,

plights and fights for freedom

while kneeling on the neck of another!

You’re not entitled to sing songs

of heroes and martyrs

mothers and fathers who cried

as they starved in a famine

Or of brave hearted

lined up in a yard

and point blank to sound

When it’s our time

To return the favour

unholy tokens of Christ, Nailed to a tree


(That) You hang around your neck

from mortar and bricklaying

you now stand upon

Our suffering seeps from every stone

your opportunities arise from

Outstanding on the shoulders

of our forefathers and foremothers

who bore your mother’s mother

Our music is for the righteous

Our joys have been earned

to remind us to remember

we’re shouting to tell you

our land, our laws

are progressively out there

We’re in a chrysalis

state of emerging into a new

Unanimous in our rainbow vote

and my God it’s good.


You Don’t Get To Be Racist And Irish.