Orders flooding in for Naomi's artwork dedicated to frontline workers 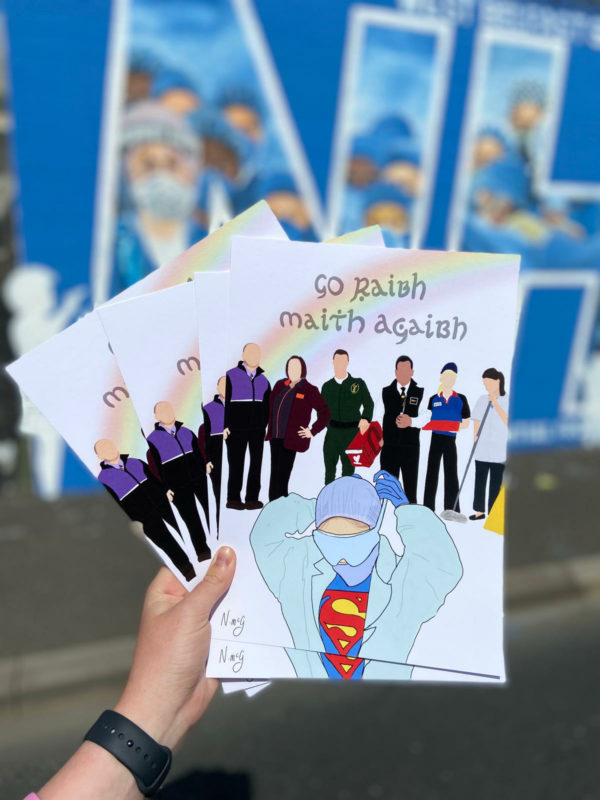 A Belfast artist has raised over £500 for the health service through a piece of art dedicated to frontline workers.

West Belfast woman Naomi McGuinness has told how online requests are flooding in for copies of the piece, which features frontline workers including a cleaner, transport workers, a supermarket worker and medical staff.

“It was just something really random to be honest,” Naomi explained.

“My friend’s sister had actually contacted me in relation to making a logo for her dog training company.

“I went to school with her and she knew I could draw, but I hadn’t used any of the skills in years. When I sent her the drawing she said I should set up a wee drawing page, which I did – I set up an art page on Instagram but I had nothing on it. I needed to draw something to put on it so I drew that piece and it just took off.

“Loads of people shared it and people had text me saying that I should get prints, but I didn’t even know how to do that, so I sought out a local artist who put me in touch with Cathedral Graphics.”

Of the 150 prints she received from Cathedral Graphics, Naomi has sold over 110 so far at a price of £5 each, with every penny going to the NHS.

“I sold some to a few people in work and to some of my friends, and they were like ‘my granny is looking ten’ or ‘my mummy is looking five’, so I decided to get more,” she said.

“The money had to go somewhere so I thought I might as well donate it to the NHS.

“People are all out doing their best to raise money and I thought that if I have a skill that nobody else has I thought ‘why don’t I put that to use and it will raise a lot of money’.”

She added: “The fella who was printing them was doing them nearly on the spot, so I’m going to wait and see if I can get these other 40 or 50 sold and then if there’s still demand for them I will get more.”