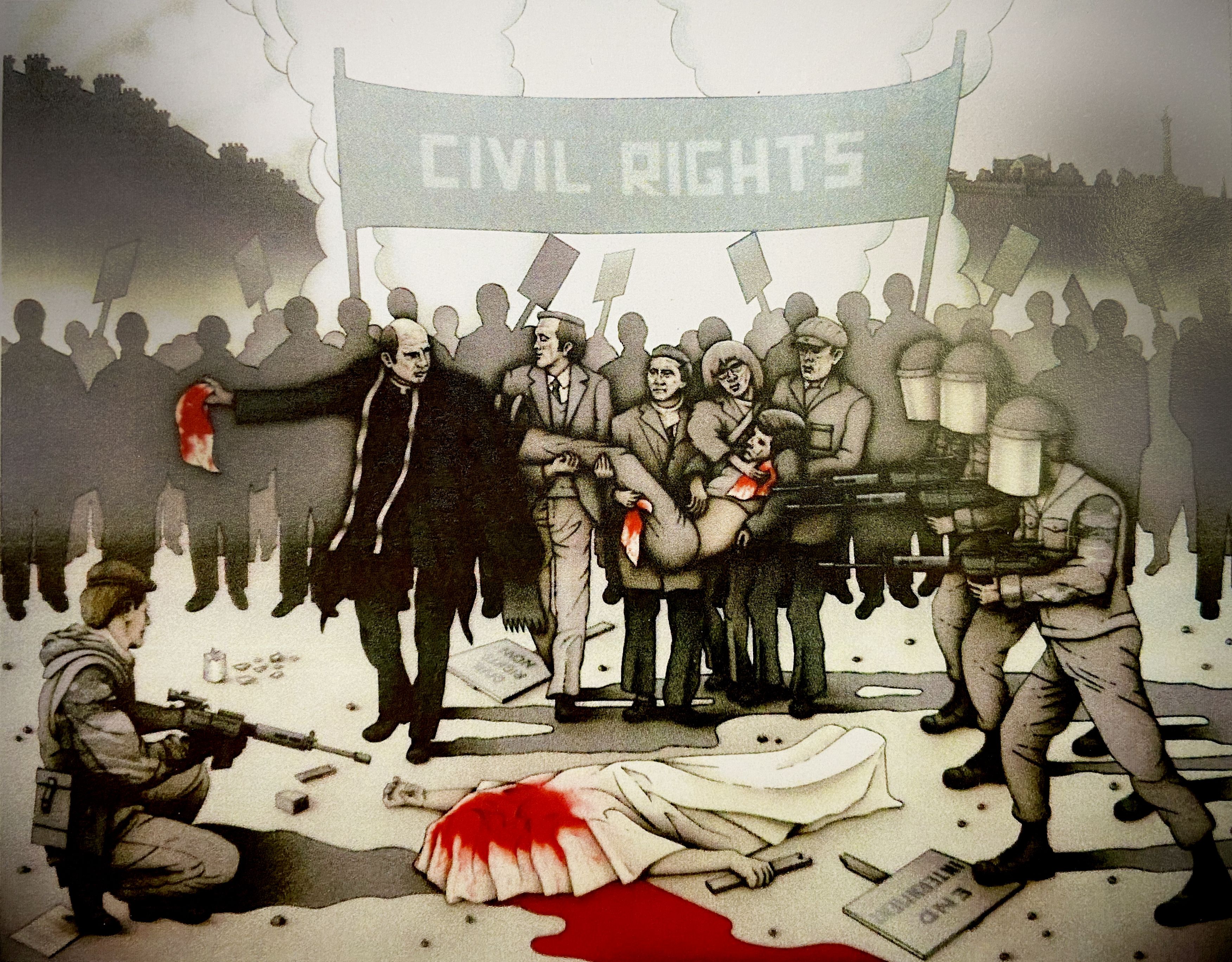 CUT DOWN: Robert Ballagh's powerful new work depicting the events of Bloody Sunday in Derry in 1972

While the powerful have been focusing on the centennial celebration of the Northern State, artist Robert Ballagh has been turning his mind to another important upcoming anniversary — one begot, it might be said, by Partition.

For January 2022 marks the 50th anniversary of Derry's Blood Sunday when 14 civil rights demonstrators were cut down by British Army Paratroopers (13 civilians died on the day, a 14th later).

That dark day has inspired earlier Robert Ballagh works but he felt obliged to tackle the subject again as January 30 2022 neared.

And so, uncommissioned, he set about creating one of his biggest works in two decades. "And when you're over 70, working from the top of the scaffold can be a little tricky," he says, only half-joking.

Arguably Ireland's greatest visual artist, Robert Ballagh is also among the few who have cast a withering eye on human rights abuses in the North.

Those same heartless shooters reappear in Robert's new Bloody Sunday canvas. And, as if inspiration from one great artist doesn't suffice, the celebrated painter gives a nod in his new work to another legendary work - Picasso's Guernica which denounces the Fascist aerial bombing of the Basque town at the start of the Spanish Civil War.

While Picasso's epic work is solely in shades of grey, Robert Ballagh allows himself one colour - red to represent the blood of the Bloody Sunday victims.

"What kind of set the seed for this," explains Robert, "is that young people in Derry did a version of my version of Goya a couple of years ago about Bloody Sunday and they asked me to come up and unveil it. That set the seed."

While too big to be shown in the Museum of Free Derry, Robert is hopeful the work will find a home in the city during the 50th anniversary year. "I've been talking to people in Derry about unveiling it as part of the commemorations," he says.

Robert Ballagh has spent the Covid crisis working daily, and alone, in his Arbour Hill studio. With the art world in lockdown, there have been no new commissions and zero opportunity to exhibit his work. However, this period of 'solitary confinement' has given him the chance to complete a series of works based on his Northside terraced home. Started almost 50 years ago, he hopes to entice a national arts institution to show the works together next year now that Number 5 completes the cycle. Interestingly, the most noted of the series, Inside No 3, is in the Ulster Museum Collection.

In the meantime, he remains scathing in his assessment of the current Dublin government. While not shy about putting pen to paper or expressing his views on the radio and TV, his views are best summed up in the media he prefers, the artist's brush, with a work (below) created to mark the 1916 centenary entitled 'Sorry State of Affairs' (below). A companion piece, some might say to his new and epic Bloody Sunday commentary.