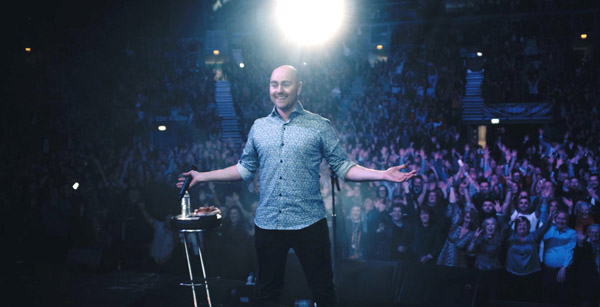 FROM the sold out SSE Arena in March, West Belfast’s comedic titan Paddy Raff has been commissioned to create his own TV pilot for BBC NI.

Having continued to lift thousands of spirits during the Coronavirus lockdown with his social media output via his Facebook page, Paddy told the Andersonstown News that viewers can look forward to his material on the box over the summer.

“I will be fronting the pilot and it will include the filming I’ve been doing since and during lockdown,” he said.

Many of Paddy’s videos have gone viral, whether it’s been Fr Pat’s All Request Mass, a catch-up with BT9er Nigel or navigating the footpath while going for the allocated daily exercise.

“I’m really excited about shooting the pilot, the news comes off the back that a third date I put on at the SSE sold out and we’ve put on a fourth for March 20 next year. There is a potential for a fifth night in March, it’s nearly a year away but it could be a month of Saturdays, a mini residency in March,” he laughed.

Paddy spoke of how his fan base has grown across the water as he had to rescheduled his UK tour for September and December.

“I keep getting asked ‘when are you putting on more London shows?’ The reception to the material in London has been great and when we get up and running again we are looking at having to put on a bigger venue.”

From early stand up gigs in Dublin Road’s The Palm House, sold out showcases in the Limelight, Ulster Hall, SSE and now on our TV screens Paddy said that he and his wife Kim “just keep pinching ourselves”.

“I always reiterate that I tried stand up comedy as a bit of a craic, something to tick a box and say that ‘I done that’ and if it didn’t work out to not then keep plugging away at it. I really didn’t see it escalating as quickly as it did, it really just took off from the word go.

“I started doing comedy when I was 34, 35 and you see different things happening in your life. I probably would’ve been a bit more cautious about doing it when I was younger. People are dealing with serious illnesses, there are people who have died young and you just have to be grateful for the fact you are fit and healthy, you really do have to be grateful for what you’ve got and keep 'er lit.”

Paddy’s pilot for BBC NI will be shown over the summer.