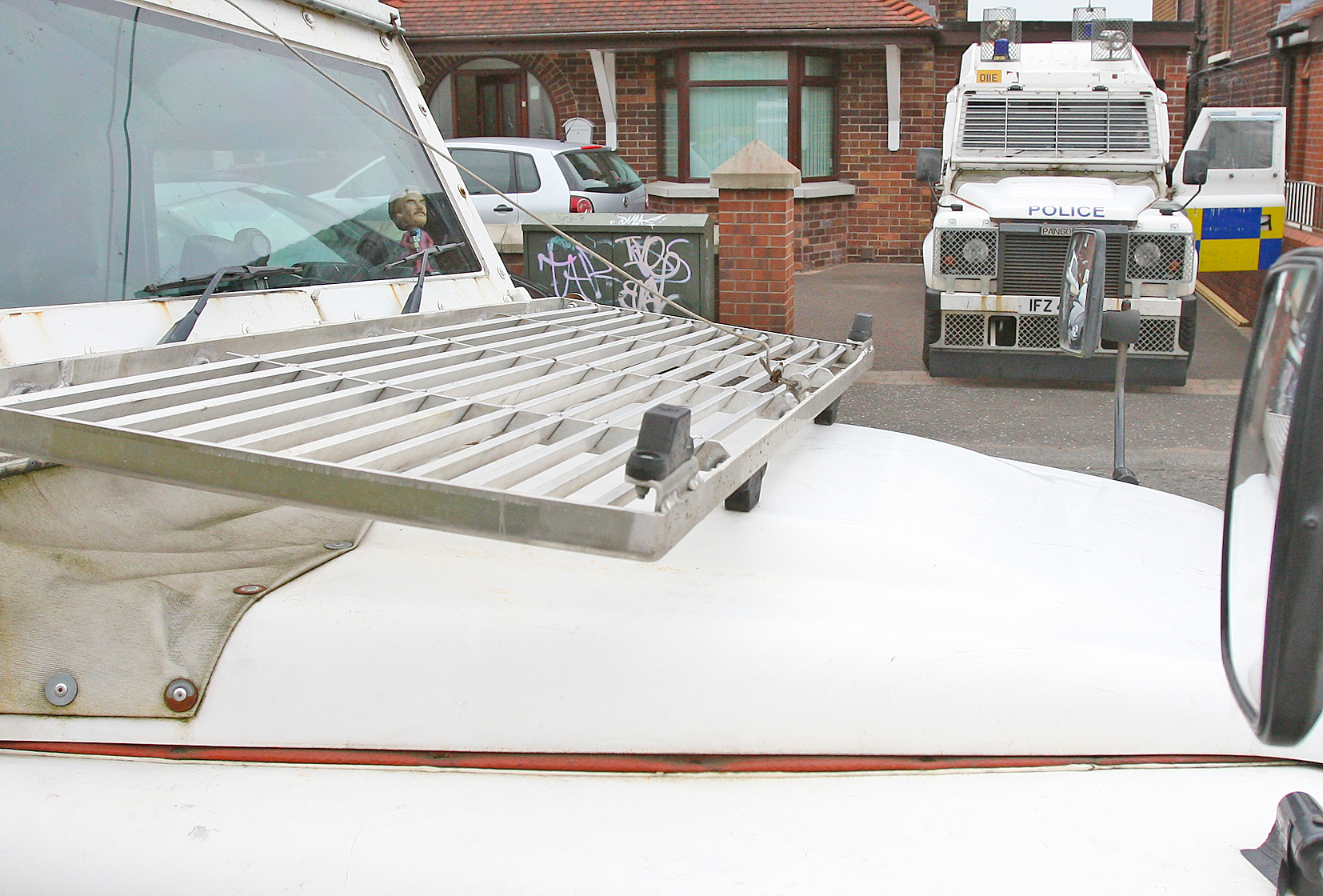 MODEL OPERATION: The PSNI raid Bobby Storey’s Andersonstown home yesterday after his arrest. Bizarrely, plastic models of Ron Burgundy, the central character in the hit comedy ‘Anchorman’ – a parody of the media – were on display on the dashboards of these two Land Rovers

REPUBLICAN sources have told Daily Belfast that there is “palpable anger” at the latest round of arrests in connection with the killing of Kevin McGuigan.

Mr Storey, the northern Chair of Sinn Féin, was lifted in a series of dawn raids in which leading republicans Brian Gillen and Eddie Copeland were also held, in the West and North of the city respectively.

The trio were taken to Antrim Serious Crime Suite for questioning. The arrests bring to 16 the number of people arrested in connection with the August 12 murder of Mr McGuigan in the Short Strand.

Bobby Storey was taken from his home by police at 7am on Tuesday morning. He was yesterday described by Sinn Féin President Gerry Adams as “a valued member of our national leadership and a person of great integrity who has worked for both the party and the people of Ireland over a very long time”.

The arrests come at a fragile time in the peace process with the parties engaged in intensive talks at Stormont.

DUP leader and First Minister Peter Robinson announced yesterday afternoon (Wednesday) that if the Assembly is not adjourned or suspended in light of the arrests, the DUP will resign from the Executive.

Hours before the arrests, UUP leader Mike Nesbitt led his team out of the Stormont talks, insisting that he wouldn’t return unless the IRA was the first item on the agenda.

“As a consequence of today’s events,” said Peter Robinson, “we are seeking the recall of the Business Committee to consider adjourning the Assembly. If that does not happen or, as an alternative, the Secretary of State does not suspend the Assembly, then DUP ministerial resignations will follow immediately.”

Yesterday republican sources said there was “palpable anger” at the latest arrests and said there is a belief in the community that there is a wider agenda at play to destabilise the institutions and undermine the growth of Sinn Féin, particularly in the south.

“It is patently clear to the nationalist community what is going on here,” he said. “I find it of some importance that Peter Robinson put out a statement a few days ago flagging other developments and today’s statement implies that this is what he was referring to.

“Two people have been killed,” he continued, “and the perception is that the case with the most political capital or exploitation in it has had the most arrests. That too is feeding into the anger in the nationalist community.”

“I was surprised to learn about the arrest this morning of our six-county party chair Bobby Storey,” he said.

“Bobby Storey is a valued member of Sinn Féin's core leadership. He has played a leading role in the development of Sinn Féin’s peace strategy and is a long standing and loyal supporter, defender and advocate of the peace and political processes.

“We look forward with confidence to his early release.”

A total of 16 people have been arrested in the Kevin McGuigan investigation to date, one person has been charged while the others have been released unconditionally.

It’s believed that former IRA member McGuigan was shot dead in retaliation for the murder in May of this year of former leading IRA man Gerard ‘Jock’ Davison in the Markets area of the city. The PSNI have said that they believe that members of the Provisional IRA were involved in Mr  McGuigan’s murder. Speaking about the developing political crisis last night, Mr McGuinness said:  “This is a very serious moment for all of us, it is a time for leadership and there is a huge responsibility for all the leaders in these institutions to give leadership at this time.

“The ultimatum that has been issued, Sinn Féin is opposed to. We are not going to jump to the inter-party rivalry being played out by the unionist parties. David Cameron told me this afternoon he will not suspend the institutions and the Taoiseach told me he is totally opposed to the suspension. If people (the DUP) do resign their seats, Sinn Féin has no fear of an election,” he added.

Attention now shifts to today’s Business Committee meeting at Stormont and the spotlight is on the UUP and SDLP, whose votes – or abstentions – are required for the DUP’s adjournment motion to succeed.