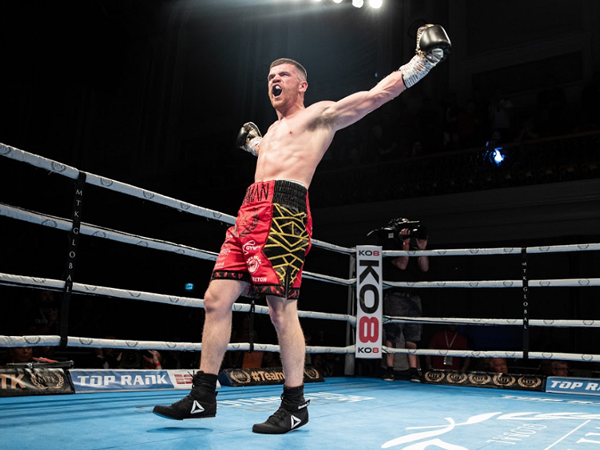 ONE man’s misery is another’s fortune. That has been the case for Paddy Gallagher who gets the chance to claim the British and Commonwealth welterweight titles against Chris Jenkins in Saturday’s chief support.

Anthony Cacace’s British title challenge to Sam Bowen was due to occupy the slot on Saturday’s card, but an injury to the champion forced its postponement and with a solid title fight required to fill the void, Gallagher got his chance.

Of course, ‘Pat Man’ has every sympathy for his friend and fellow pro having had to endure fights falling through over the course of his seven year career, but at the same time was thrilled to get the opportunity and he plans on capitalising on the night.

“It’s an unbelievable fight for me,” said the Lenadoon man.

“Obviously, the Cacace fight was off and he was left high and dry. I’m gutted for him because I know how that feels, but it turned into a positive for me because it got me this fight.

“You have all of the different belts like the Inter-Continentals and all that, but the Commonwealth is a legit title and it’s over 12 rounds so winning this would push me up into European and world title rankings.”

Should Gallagher prevail in what is expected to be a highly-entertaining scrap against the Welshman, it will complete the set given he claimed Commonwealth gold as an amateur at the Delhi Games in 2010.

There has been much water under the bridge since then, but the goal has remained the same and with Jenkins’ British title also on the line this Saturday, this is a golden opportunity for ‘Pat Man’ on home soil.

“I won gold at the Commonwealth Games and if I was to win this, that would mean I’m a Commonwealth champion as a professional and an amateur, which I planned to do when I turned pro,” he explained.

While both titles are on the line this Saturday, perhaps this is one fight where belts aren’t needed to set the pulse racing.
Both men have a fan-friendly, aggressive style so they ought to gel from the off and with the vast majority of the crowd due to be in place by the time they square off, there will likely be a raucous atmosphere generated.

“This will be right before Conlan when the place is packed out so the place should be buzzing,” predicts the 30 year-old.

“It will be a good fight because he is always in good ones and I think people know that I’m always entertaining.

“This is really one to get up for and will hopefully make up for all of the bad stuff in the past like that fight against (Freddy) Kiwitt that I lost.”

That defeat to Kiwitt for the WBO European title back in February was something of a shock and stemmed from the fact that Gallagher was down in the fifth and eighth rounds.

Having absorbed the lessons from that fight where he was too keen to march forward and was subsequently countered, Gallagher and his team went away and made the adjustments.

Against Liam Wells in June, he was much more patient and laid the foundations for his attacks before pouncing and forcing a third-round stoppage. It is that type of performance he is planning on and now has the confidence he can pull it off.

“The last time we changed our approach a bit,” he explained.

“That is the type of performance we want to bring into the Jenkins fight, only a lot better as it’s a harder fight.”

That is a mature approach to take because Jenkins will undoubtedly prove a much tougher nut to crack than Wells.

The Swansea native is coming in off the back of a British title win over Johnny Garton just as it looked as his career was on the slide.

He has previous with Irish opposition having lost out to Phil Sutcliffe on points last November, so is no stranger to Belfast although the atmosphere will certainly be several notches above what he has previously encountered.

Gallagher knows he must perform as this could be his last chance to claim major titles and while he is expecting it to be a tough night, he is confident that he has the tools to get it done.

“It’s a very winnable fight for me,” he offered.

“He is going to be in high spirits after the Garton fight as it was a great win for him. It will be hard, but very winnable and one I’m more than confident I will win. I will do that if I get the head right and perform like I did the last time.”