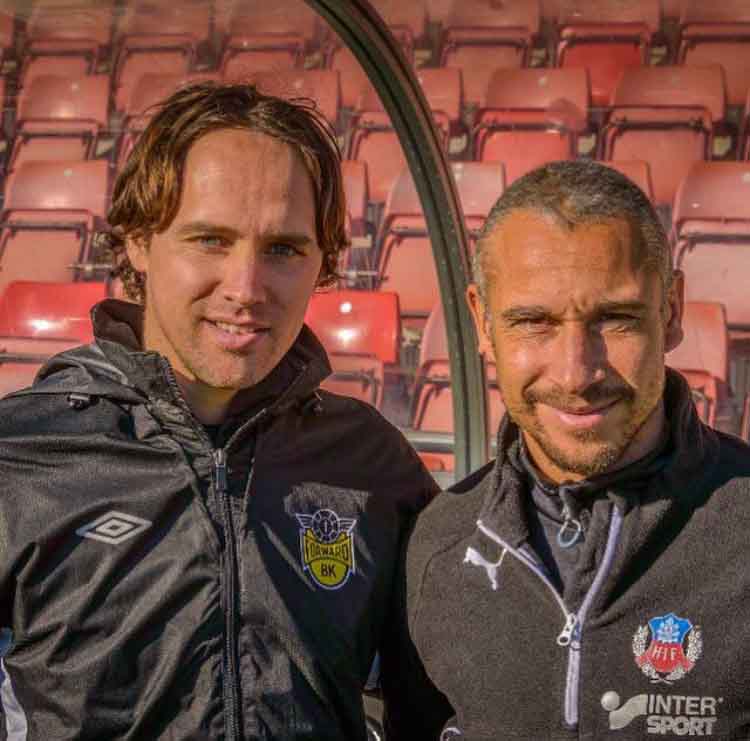 Örebro SK U19 manager Paul Munster, pictured with Swedish football legend and Helsingborg coach Henrik Larsson, said he is unsure if he will remain in Sweden when his contract expires next month despite helping his side claim the U19 Swedish Cup

FORMER Irish League star Paul Munster says he is currently mulling over his future as coach at Örebro SK just days after guiding the club to their maiden U19 Swedish Cup success.

The ex-Linfield and Cliftonville player has spent the last year managing the club’s U19 and U21 side having played for the club back in 2006.
Munster spent two days back in his native Belfast last month as he continues to work towards gaining a UEFA pro licence.

With the Swedish season now finished, he faces a tough decision as to whether or not he wants to remain at Örebro SK or seek a move elsewhere.
“The league has finished in Sweden and our season ended with the U19 Swedish Cup win,” said Munster.

“Pre-season starts in three weeks before a break at Christmas. I have to decide what I am going to do because my contract finishes at the end of December.
“I am with the U19s and the U21s at Orebro SK and this is my first year managing at the club, but I played for them in past.

“I am not quite sure if I’ll stay in Sweden. I am looking at my options at the minute. My ambition is to go higher and go back to senior level.
“Long-term, it is difficult to say with management because everything changes so quickly.

“The aim is to be managing in Europe, I don’t know which country. Hopefully, it would be at a good European club or a good European league.”
After spending a weekend in Belfast at the end of October, Munster is back in Örebro as he looks to negotiate his future.
While he insists he enjoys living in Sweden, the cost of living and the harsh winters could be a factor when he considers his next move in coaching.
“It is a nice place to live,” said Munster.

“Right now, it isn’t really cold, but the winters aren’t nice. It is too cold. The season is the same as the Republic of Ireland’s league.
“You can’t play here in the winter – it is just too cold. It can be minus 10 to 15 at times.
“That’s usually when people here go to warmer counties. They go and hibernate!

“It can be very expensive here, especially if you want to eat out and if you like a drink.
“The money and the wages reflect that, but you need to be smart with your money. I’ve been here five or six years and I know how it is so I can get by.”

Munster’s stock has rose considerably since winning the U19 Svenska Cupen.
After claiming an impressive 6-0 win over Nora in the semi-final, Örebro were forced to dig deep to claim a 1-0 win over city rivlas Karlslund.
Being able to claim his first piece of silverware as a coach at the club’s 14,000-capacity Behrn Arena was a special moment for Munster.

“It was a massive thing for the club,” he said.
“It was a tough game and to win 1-0 and keep a clean sheet was great.
“It was a game we had to win no matter what it took.
“It was at our ground as well, so that helped. We had a decent crowd.

“Everybody at the club was delighted at the club because we had never won a cup before at that level.
“It was my first honour as a coach also. They had been second and third in the league, but had never won the league or won a cup.
“For me, it maybe helps other clubs to take notice because I am still a very young coach.”
In the coming weeks, Munster will continue working to obtain his pro license, part of which entails going to watch a Champions League game, visiting UEFA’s headquarters in Zurich and watching top La Liga side Valencia train and he hopes to come to a decision on in future before the end of the month.

“The pro license takes 18 months to complete so I should be finished that this time next year,” added Munster.
“It entails going to different counties to watch different games and learn as much as you can.
“It is great to see the different set-ups and see the different cultures.”

“I started off with Celtic Boys in West Belfast before playing for Cliftonville youths. I then went to Canada and played for Linfield when I came back.
“I have always liked Sweden and I started out helping out my friend’s team who were struggling in Division Four. From there, I moved up the ranks and I have done well with every club.
“Everything has been going well so far with my coaching career. I am in contact with the club, but they know my ambitions.
“You want to move to the right club, you don’t want to take just any job.”

The much-travelled coach has had a successful career since retiring from professional football back in 2012 and has clearly enjoyed his time in Sweden, but a move to a club closer to home could be on the cards in the coming weeks.