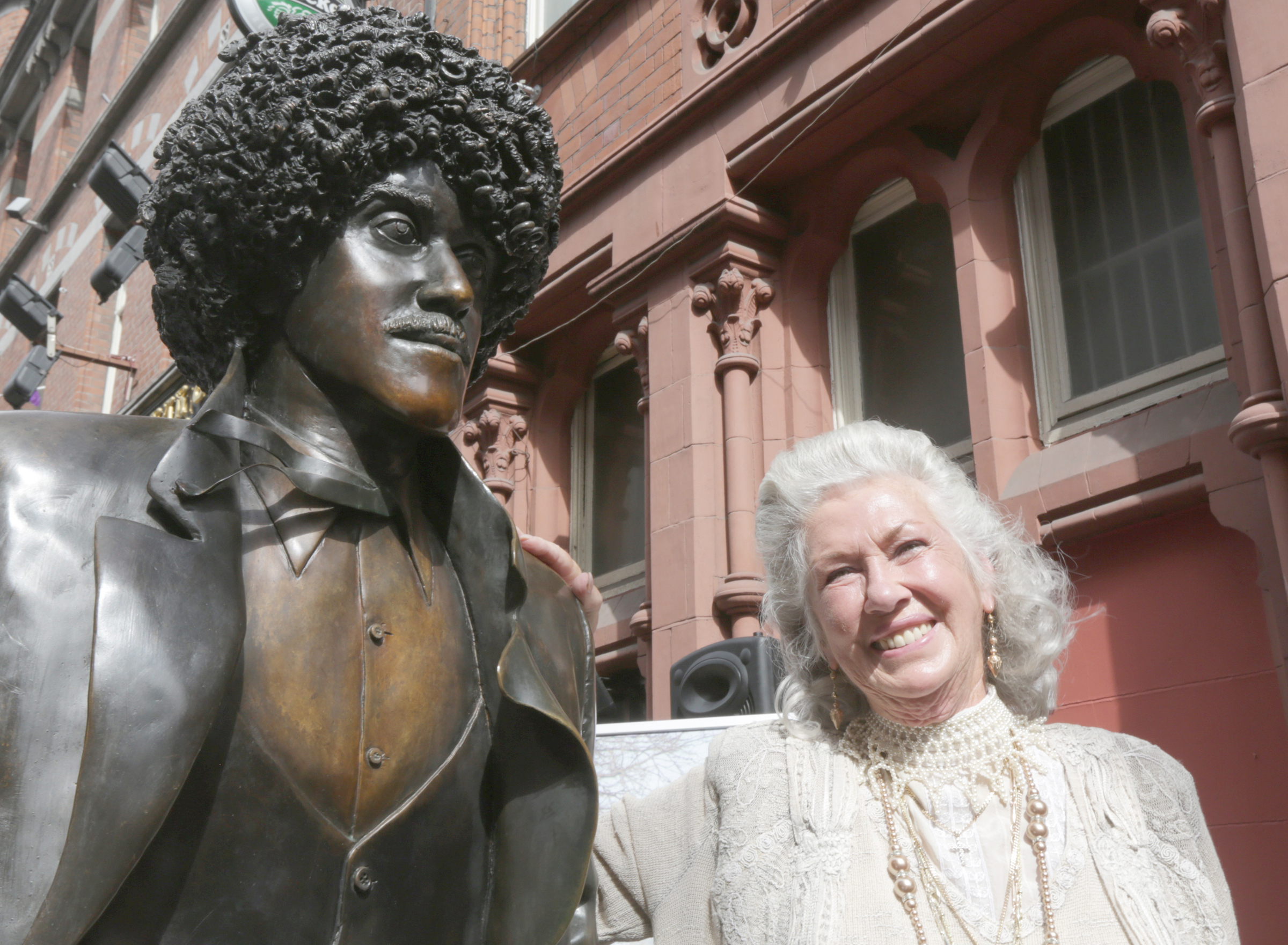 The following is an excerpt from Larry’s new book, A History of Irish Music…

It was hard to ignore Phil Lynott. He was like a force of nature breezing through the Dublin streets, often times a bunch of inner-city kids trailing and flailing behind him as though he was a reincarnated pied piper – and this was long before he gained international fame and fortune as the lead singer of Thin Lizzy.

It wasn’t only because Phil was black that he stood out in a Dublin that was then very homogenous; no, he was just larger than life, and in the nicest possible way. Perhaps one of his most endearing traits was that he had a very thick Dublin accent. Now I don’t know whether he cultivated this, but it was quite stunning for an ignoramus like me up from the bogs of Wexford to hear a black man give forth in a Crumlin accent.

His mother, Philomena Lynott, had emigrated to Birmingham after World War II. There she had a relationship with an Afro-Guyanese man, Cecil Parris; although he offered to marry her when Phil was conceived, she declined. Thus Phil was illegitimate at a time when such a state was socially frowned upon, to put it mildly; add Phil’s colour to the mix and one can see the difficulties the young woman confronted. Philomena sent him home to be raised by his grandmother while she worked on in the UK to provide money for his upkeep. By sheer force of character he blunted the racism and social stigma that one might expect in a tough working class environment of the 1950s and he soon became the most popular boy in his school.

But Phil was always bent on musical expression and achieving rock stardom. By the time I first saw him he already had considerable flair and a well-developed eye for the camera. Tall and rail thin, with a stylish Afro, and a bandana or two streaming behind him, he looked not unlike an Irish Hendrix.

One night my flatmate Pierce Turner and I were having our weekly dinner out at the Luna, a Chinese restaurant perched over O’Connell Street, just across from the GPO, and lo and behold, who sat down at the table next to us but Phil and Eric Bell of the recently formed Thin Lizzy. After exchanging cursory greetings, we returned to our food but kept our ears cocked for any pearls of wisdom that might drop from the mouths of these demigods.

The gist of the conversation was that Lynott felt they had to move to London, but Bell was reluctant. Phil did most of the talking, insisting that they’d never make it if they “got stuck in Ireland”. The phrase stayed with me as I was feeling much the same myself.

I can’t emphasise enough just what an impact ‘Whiskey in the Jar’ had on the youth of Ireland. It exploded out of mono car speakers – everyone played it at full volume, a Paddy anthem of self-affirmation. Phil’s voice seemed to probe the song’s very soul while Eric’s overdriven guitar was a melodic revelation. This was our music, something we’d been waiting for all our lives, and it was rawer and funkier than anything we could have imagined.

I didn’t see Phil again until October 1977. Eric was long gone by then. He quit Lizzy in the middle of a New Year’s Eve concert, throwing his guitar into the air and pushing his amps into the front rows of the audience. The constant touring, and drug and alcohol abuse finally took their toll. There were persistent rumors about such doings in the band, yet Phil seemed as clean as a whistle at the Palladium on New York’s 14th Street when Lizzy topped the bill with Graham Parker and The Rumour opening.

I went along for sentimental reasons but, in truth, I was more interested in Parker and the new Punk sound that was coming out of London. Many in the audience must have felt the same for a significant portion left during the changeover.

At first Lizzy seemed jaded: the rock-star lights and smoke machines dated them. And then Phil took control. I’m not sure what he said to his bandmates but it was vitriolic and spat from the teeth. The house might not be full, but this was Thin Lizzy from Crumlin, the boys were back in town, tonight there was going to be a jailbreak, and suddenly the band gelled, kicked arse, and it was Dublin 1969 all over again with everything to play for and no prisoners taken until after the final sweaty encore.

Up in the crowded dressing room, Phil was his usual courteous, friendly self. But I could tell he was disassociated from everything that was happening in that champagne room; nor did he take a drink, just stood with his back to the wall. No-one mentioned Graham Parker but he was on Phil’s mind. The black rebel from Crumlin was now the establishment and the Punk barbarians were at the gates. Was it my imagination or was Phil wishing he was down the hall in the opener’s dressing room plotting world domination?

I was deeply shocked when the news broke on a bitter 1986 January morning that Phil had passed away. I won’t say it was the end of innocence – far from it, for I had tasted many things myself by then. I was sad for days and then I filed it away with all the other rock ‘n’ roll train wrecks. In the end, you have your own life to live and, callous though it may seem, you thank your lucky stars it wasn’t you.

I find it really hard to look at Phil’s statue in Dublin; I usually give it a curt nod and pass on. It’s a mere parody of the man who swaggered down those streets, the very life force exploding out of him. Nah, instead I stop every time I hear him electrify ‘Whiskey in the Jar’ and I crack a smile – and often a bottle – for the black Crumlin rebel who gave light and hope to so many of us who set off on our own rock ‘n’ roll journeys.

‘A History of Irish Music’ can be purchased at www.black47.com, as well as at amazon.com and B&N.com, or ordered from any bookstore.