Pierce’s return trip is so worthwhile 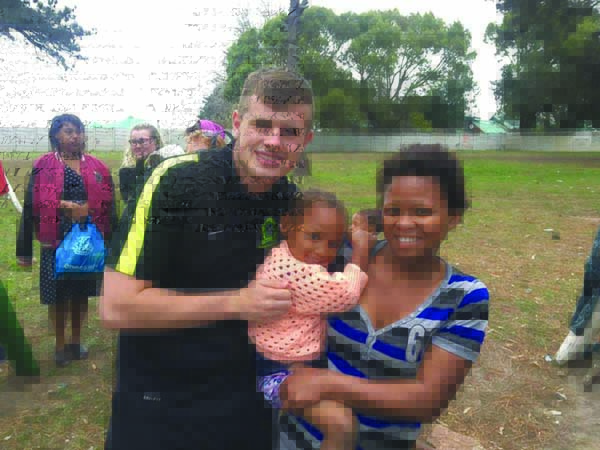 “THERE were laughs together, cries together and every other emotion that you could think of, but one thing for sure is we had the time of our lives out here and created memories that will live on forever here and back home.”

Those are the words of young North Belfast man Pierce McConnell who has just returned from South Africa on the annual Belfast 2 Blanco (B2B) project, which has been uniting young people from Ardoyne and the Shankill since 2013.

The project was formed by Thomas Turley from Ardoyne Youth Club and Alan Waite of Hammer Youth Club (Shankill) to engage young people to help those less fortunate than ourselves while providing them with an international experience and enhance and broaden their horizons.

Pierce, who is 19 years old, and from Ardoyne, said he made a second visit to South Africa with the programme to re-motivate himself after his first visit to work and support those less fortunate than us.

“Returning to Africa has completely re-motivated me for returning home in terms of work, university and personal life,” he said.

“I feel that I needed this as when you arrive home from your first time out here you feel like a new person, a person full of energy, motivation, passion and determination to reach and fulfill all your goals and targets that you have set yourself.

“Sometimes when we arrive back we get caught back up in society and take your foot off the pedal and procrastinate on everything you were so determined about not so long ago.

“It can be really hard to get that back and I feel that everything has fallen into place at the right time. I think between South Africa and the R-City camp in July, it has pulled me right back to where I need to be to get to where I want to be.”

Pierce admitted he felt more appreciative after his second month-long visit to Blanco which made him reflect on how lucky he was as a person.

“One thing you never fail to take away from this place is appreciation. It gets thrown around a lot but the more time you spend out here the more appreciative you really do become. We all seem to get caught back up with how spoilt we really are, after a while of being home or seeing something that’s made us appreciative, but I can't stress to you how lucky everyone of us really is. To have dinner, never mind options to have shoes on your feet, to have someone that cares for you, to have some sort of education, the list goes on. Because we are some of the luckiest people on this planet and this isn’t to say that we don’t have our own problems, because certainly we do, none of us have the perfect life but somewhere out there is someone facing a tougher situation than we are in much tougher conditions,” he added.

Reflecting on the visit, Pierce felt he had more time to empathise and think about the people he was working with after being caught up with the excitement of the trip the first time around. And he re-called an eye-opening experience close to a 2010 World Cup stadium.

“I think working alongside and facilitating some group work sessions with the R-City Blanco team has helped me associate with the people more,” he explained.

“Their hopes and dreams for themselves and the community was inspiring to everyone, they come from a run-down, poverty-stricken community, yet still have such a positive, ambitious and caring mindset.

“I have seen some things over here that have really stuck in my head and replayed themselves over and over.

“Another thing that stuck with me, was when we took a trip down to Port Elizabeth for the weekend and on our way home we passed a multi-million pound football stadium that was built for the World Cup.

“This was used for four or five games and is only used a two or three times yearly. I found it disheartening because 10 or 15 minutes away from this multi-million pound stadium are poverty-stricken communities where people live in wooden shacks and kids haven't a stitch on their backs.

“All I could think of was that even if a small fraction of that money that was pumped into that stadium was to be invested in facilities in Blanco, the people of these townships would have a real pathway to reach their full potential and make major difference in not only their own lives but everybody that surrounds themselves with these amazing people.”