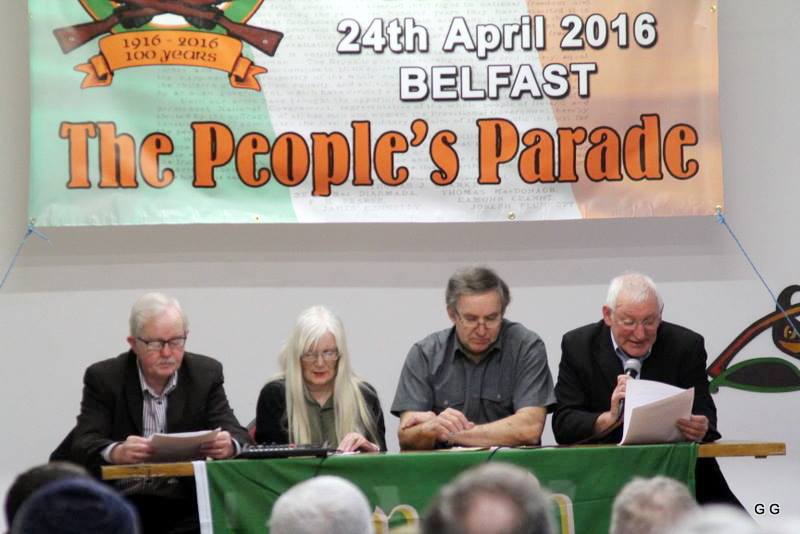 Negotiations are under way in an effort to bring together all republican groups in the city next year for a single, united Easter march to mark the 100th anniversary of the 1916 Rising.

This year, various republican groups and factions will as usual organise their own Easter events across Easter Sunday and Easter Monday. Last year there were nine separate events (see list below), and against the background of constantly shifting dissident republican politics, this year there could be even more. The myriad parades inevitably lead every year to wry comparisons with the Monty Python ‘People’s Front of Judea’ sketch.

But now the newly-formed 2016 Parade group hope that next year all republican groupings will forego their annual parades for a one-off show of unity. Spokesman Sean Cahill explained the reasons behind the plan at the launch of the 2016 Easter parade project.

“This group came together in the last few years with one aim – to provide an opportunity for the people to honour the men, women and children who fought and died for the freedom of our nation in 1916,” he said. “Each of us involved in this group come from an Irish republican background and our affiliations are varied. However, we have agreed that all personal politics remain outside the room and that it is more important to do the right thing in honour of our brave forefathers.

“We have just one aim for 2016 – to organise and bring to fruition one parade that everyone who regard themselves Irish Republican may have ownership of. This commemoration will have no party political domination, in fact there will be no political speeches, other than a recreation of those from the history of 1916.”

Sean said they believe the event will appeal to a wide range of republicans.

“For many years, many of us have heard the concern voiced by people that the ever increasing number of Easter parades, and the party politics being played out at these commemorations, leave some feeling that they don’t feel that they have a place at them. We are certainly not criticising republicans for commemorating their, indeed, our, fallen, and in fact we believe it is right to do so.”

The organisers hope that the event will bring together groups from right across the north.

“We hope that, just as in 1966, we will have a wide range of participation in the parade. We hope that all cultural groups, sporting clubs and political groupings and parties will show an enthusiasm for this event and come on board. We have already had contact with some relatives of those who took part in the Rising and subsequently gave the ultimate sacrifice, and we are proud to say that they are very supportive of this parade.”

The planned 2016 parade will begin at Barrack Street and proceed to Divis Street, continuing along the Falls Road into Milltown Cemetery and on to the Harbinson plot, where a short ceremony will be held to give all those gathered a chance to pay their respects to the men women and children who took part in the 1916 Rebellion.

“To date we have had many enquiries from the Irish diaspora across the world, some have told us that they have booked the holidays so that they can be here with us,” said Sean “We have also had requests from republican bands wanting to be part of the day’s events. We have also had huge encouragement from the ordinary people on the streets who have told us that they think this is a fantastic idea. The door to participation is open to all those who regard themselves as Irish republican and the door will remain open.”

Delicate negotiations are at an early stage and, given the bitter enmities that divide some of the groups, organising a single mammoth march would appear on the face of it to be an impossible task. But it’s our understanding that the 2016 parade organisers have been encouraged by the response so far from the various groups.