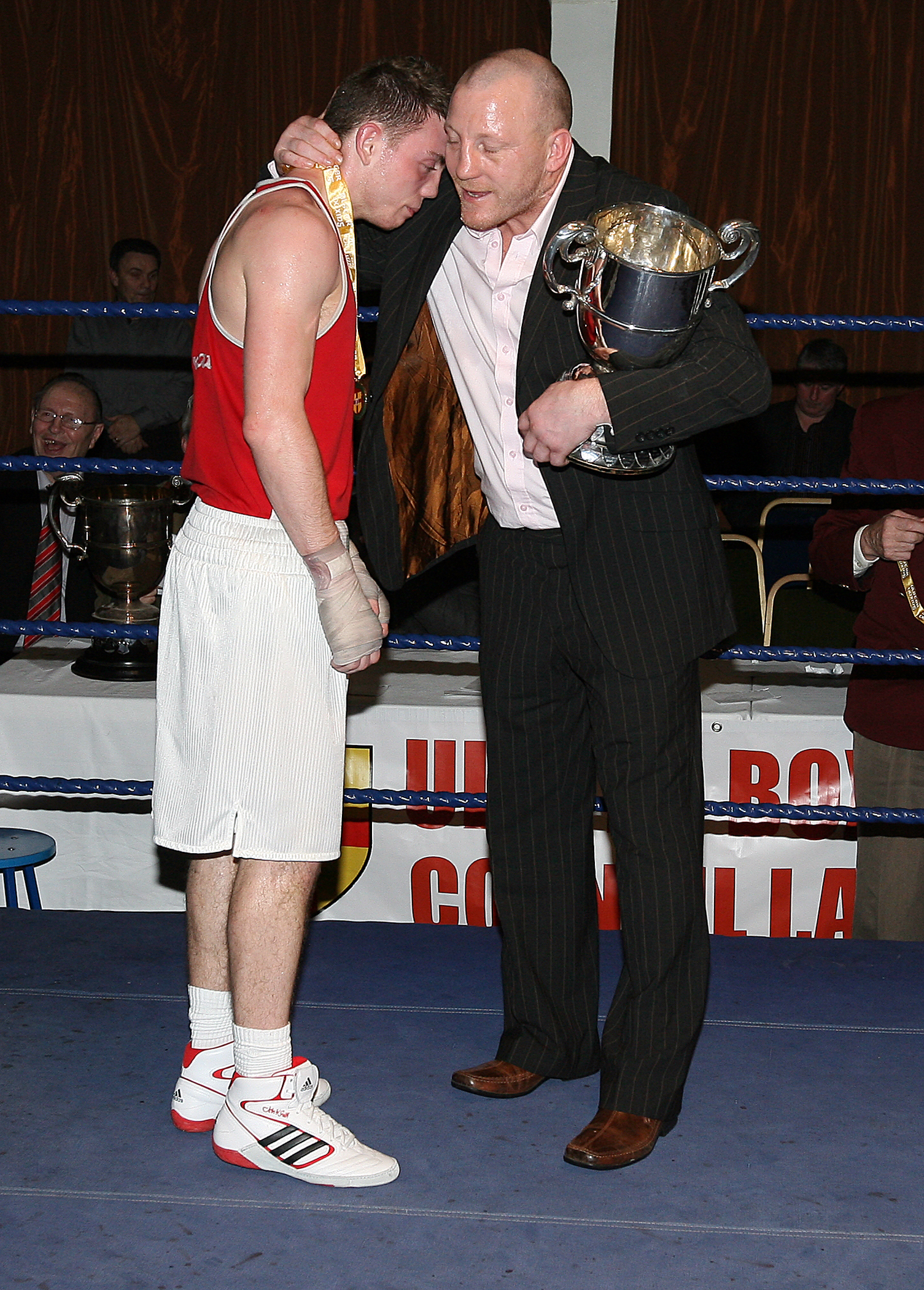 Eamonn Magee Jnr with his dad, Eamonn Snr, after a bout in the Emerald Roadhouse in 2011

Police are today continuing to question a 32-year-old man about the murder of pro-boxer Eamonn Magee Junior after being granted an extension.

The man was arrested on Saturday morning, hours after the brutal slaying of 22-year-old Eamonn, who was stabbed several times in a friend’s garden in Summerhill Park, Twinbrook, at around 2.30am.

Police believe the killer had been in the area for some time prior to the attack and may have lain in wait for the victim to emerge from his friend’s house. Police say Mr Magee had left the property to check on a pizza delivery.

Police are still looking for the murder weapon, but yesterday they put on display an eight-inch cook’s knife with a distinctive green handle which they believe is identical to the one used in the killing. They say the knife went missing from a nearby property.

Mr Magee, a student of engineering at Ulster University, was the son of former WBU welterweight champion Eamonn Magee Senior.

The officer leading the investigation, Detective Chief Inspector John McVea, said: "Nobody would have known that Eamonn would have been coming out of the house to look for the pizza delivery, therefore we believe that the person was lying in wait for Eamonn as he would have come out of the house.

Appealing for witnesses, police asked for anyone who was in the Summerhill area between 1.30am and 3am to come forward.

"We believe the attack happened at 2.30 in the morning, but we believe the person may have been in the area for some time prior to the attack," DI McVea added.

Police also want to speak to anyone who may have seen a person leaving Beckett's Bar on the Stewartstown Road and proceeding to the Twinbrook estate in the early hours of Saturday.

Local Sinn Féin MLA Jennifer McCann said the West Belfast and boxing community had been left “utterly shocked and saddened” by such a tragic loss.

“The community are shocked by this brutal and callous killing of such a young man who had his whole life ahead of him,” she said. “We have been working extensively with the PSNI since this awful attack happened in the early hours of Saturday morning. I know the PSNI are still appealing for anyone with any information to come forward and I would stress that also.

“We have seen so many heartfelt tributes paid to Eamonn and our deepest sympathies go out to the Magee family. Eamonn Magee Jnr was a very well respected young man in the boxing community and I know social media has been flooded with tributes to him. This is an extremely tragic time for the family and I intend to visit with them tonight (Monday) to offer our support.”