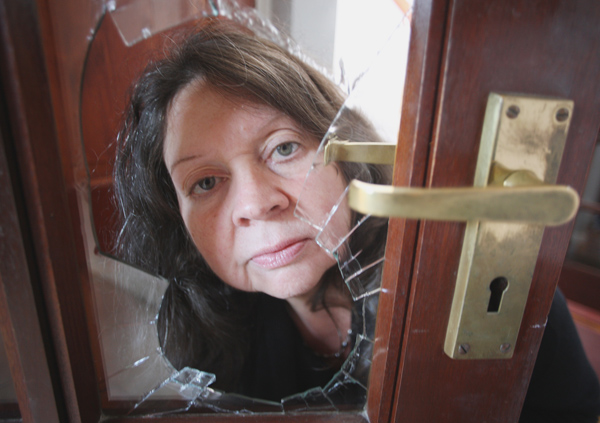 BREAK-IN Patricia Lemon has been left heartbroken by the theft

IRREPLACEABLE jewellery of “immeasurable sentimental value” has been stolen during a burglary in South Belfast at the weekend whilst the victims were visiting their granddaughter’s grave.
Patricia Lemon and husband Richard spent Sunday afternoon at Roselawn cemetery organising their granddaughter’s headstone before returning home to Loughview Drive to find they’d beem burgled.
“We left around 3pm and to be honest we hadn’t intended to stay out for so long, but we were at my granddaughter’s grave arranging a new headstone and time got away from us,” said Patricia. “Richard opened the door and out of habit began looking for flyers and leaflets that might
have came through the letter box and that’s when he noticed the glass. I ran straight up the stairs and it was in complete and utter disarray. Drawers were pulled out and our belongings were strewn across the room, I just couldn’t believe it. You just feel so violated and vulnerable. It was the last thing I was expecting to happen to us.”
It was reported that the property was entered some time between 2pm and 7pm. A sum of cash, a number of items of jewellery and a quantity of perfume was stolen.
Burglars made their way through an wrought iron gate to gain access through the rear of their property, breaking in through the back door and another internal door before being able to access the stairs to the ransacked bedroom.
“The gate was broken off its hinges and the rear mahogany door has been massacred. Our outdoor garage was also broken into, I assume to try and locate a ladder to gain access through an upstairs window, but all we found was our multi function axe from the garage laying by the door unopened.
“They appear to have used a crowbar to get in. I know they didn’t go into the rooms downstairs as there was £40 untouched so they just went straight into the bedroom.
“They took everything including perfume, a substantial amount of money set aside for work to the house and a lot of jewellery, most of which I have had from 14 years old. I’m in my 60s now and I’m just disgusted someone could come in and snatch these from us. I had a blue sapphire taken, a ruby and an emerald ring with diamonds around them, a heavy gold cross and chain, gold hoop earrings, two gold signet rings one of which has the initials PW, a navy sapphire enegagement ring beveled at the sides, two gents’ signet rings one with a diamond the other with a black onyx, a ruby eternity ring and two solitaire diamond engagement rings. They have literally taken everything and anything of value either monetary or sentimental. We don’t have a car, we don’t go on extravagant holidays. I don’t understand why they have targeted us. The nerve of them.”
Patricia said she has had difficulty sleeping since the intrusion and is taking measures to secure her home as best she can.
“I have lived here for 30 years and this is the first time anything like this has happened to us. This just takes the heart right out of you knowing that someone has come into your home armed with a crowbar. It’s an absolute disgrace that they can just come into my home and do this. I can’t sleep out of fear and upset. I thought out house was secure with the heavy doors, gates and neighbours, I never dreamt we would be targeted.”
Patricia has spent the past week desperately appealing for any information that could lead to the return of the jewellery, but said she is growing less hopeful with each passing day.
“My daughter has been scouring the pawn shops and online sites for the jewellery and we are appealing to anyone that even thinks any jewellery they are purchasing strikes a resemblance to the description to get in touch with the police.
“On the front garden gate there is an iron bar and every night I would turn that bar across the gate but the next morning it would turned back. This happened over the last week or so in the lead-up to the burglary and in hindsight it seems that the perpetrators were scouting the place out.”
Warning residents to take extra care securing their home, she highlighted the fact that the incident happened in the early evening adding those responsible brazenly went to great lengths to gain access.
“More than anything I want to put this out there to warn neighbours and the wider community to up their security and keep an eye out for anything suspicious. It really could happen to anybody.”
Police are appealing for anyone who may have witnessed the incident or who may have information about the incident to contact officers in Strandtown Police Station on 101 quoting reference 1249 30/09/18.
Alternatively, information on the burglary can also be provided to the independent charity Crimestoppers on 0800 555 111 which is 100% anonymous and gives people the power to speak up and stop crime.