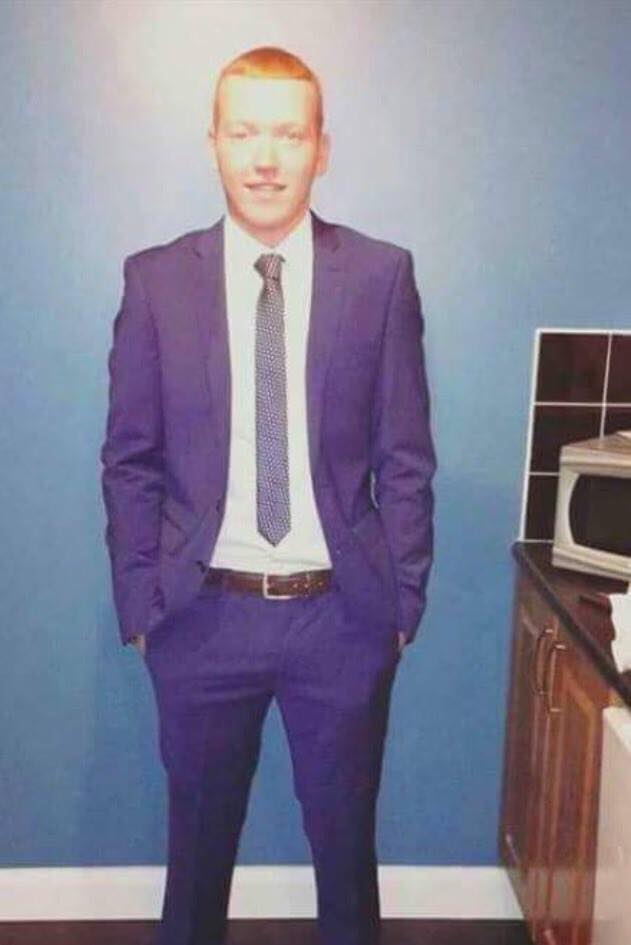 A PALAPABLE sense of sadness – and also one of anger – hangs over the community of West Belfast after the death of an 18-year-old from taking prescription medication.

Former Corpus Christi College student Aaron Strong lost his fight for life on Wednesday after being rushed to the Royal Victoria Hospital on Saturday morning. It is understood Aaron suffered a massive heart attack caused by a mixture of prescription medication and alcohol. Aaron had been in a coma since his admittance but passed away on Wednesday afternoon.
Aaron, from Glenalina Road in Ballymurphy, was due to start a new life across the water in Bournemouth this week and was set to celebrate his 19th birthday with twin Ryan this coming Monday.

Upper Whiterock and Springfield Sinn Féin Councillor Steven Corr said there was “overriding sadness but also overriding anger in the community that has Aaron has died”.

“Aaron Strong was a young lad I’ve known for a number of years,” said Councillor Corr. “I have a son the same age. I’m talking to you as the news has just broken his afternoon that Aaron has passed away surrounded by his loving family.”

Councillor Corr said it’s vital that the supply of prescription drugs to local young people is cut off before any more deaths occur – and that means facing down the dealers, some of them well-known locally.

“I met with concerned residents last week about the ongoing issues in this part of Ballymurphy but real time has overtaken us and we now have a result where a young man is dead.
“There is such anger in the area that more needs to be done to get these dealers out of our community,” he said.

Cllr Corr said there is one particular drug house in the Ballymurphy area that is “the epicentre for the sale and distribution of both illegal and prescription medication”.
“Everyone knows it, it is all over social media,” he said.

“These dealers are poisoning our young people and they need removed from this community, from this estate, and they need to be dealt with by the courts. We will continue to work on initiatives, engagements to curb this, we have to.

“It’s poly-drug and drink use now and it’s really frightening. I mean, the news is only filtering through the area now that this wee fella has died.”

“All I can say is that the best form of action is abstinence. There is help at Falls Community Council, we have highlighted this before and I am again in such sad, sad tragic circumstances.”
IRSP spokesperson Gerry Foster said activists from his party have taken prescriptive drugs off dealers and that they had also been handed into their offices.

“We are hearing about these so-called Budweiser drugs and Loyalist Blues that are being circulated in the Ballymurphy area. They are being sold for £50 a bag or £1 for one tablet. We are hearing there is even a dud one knocking around called Yellows.

“IRSP activists have taken these drugs off a number of young people and drug dealers, some of the drugs that were got were still in their boxes and said ‘not fit for human consumption’ basically these drugs are for animals,” he said.

“There needs to be a lot more vigilance around these drugs that are becoming widespread. The dangers are obvious. How can you tell young people not to do something? It seems impossible. It shocks me how causal this has become.”

Corpus Christi Principal Frank Maskey paid tribute to Aaron saying the 18-year-old was “a very popular kid who was well liked by his peers and teachers”.

“I would have known Aaron for around two and a half years, by all accounts he was a great character, he was very well liked by his teachers and always had a smile on his face. Aaron had lovely manners and was a kind-hearted kid,” he said.

Frank spoke of how Aaron was the type of person to “look after people and would’ve stayed behind after class to help his teachers or ask them was there anything he could do to help?”
“He was a kind-hearted kid, just God love him. Aaron’s death has come as a huge shock to our school community, that something like this would happen to the likes of Aaron, it’s such a waste of a young life.

“We knew from Saturday that things weren’t too good and all people are saying is ‘how did this happen?’ Aaron was one of the really good children, to look after people was just in his nature.